Singapore has approved the Pfizer-BioNTech Covid-19 vaccine and is expecting the first shipments to arrive by the end of December, Prime Minister Lee Hsien Loong said Friday.

“I am very happy to tell you that after studying the scientific evidence and clinical trial data, the Health Sciences Authority has approved the Pfizer/BioNTech vaccine for pandemic use, the first shipment should arrive by the end of this month,” Lee announced in a televised address to the nation.

“We also expect other vaccines to arrive in Singapore in the coming months; if all goes according to plan, we will have enough vaccines for everyone in Singapore by the third quarter of 2021,” Lee said.

Shots will first be administered to those at “greatest risk,” including healthcare workers, frontline personnel, and the elderly population, according to the Prime Minister.

Vaccines will be free of charge to all Singaporeans and permanent residents, but will not be compulsory, Lee said.

Lee also announced that Singapore will start "Phase 3" of reopening and a further relaxation of coronavirus restrictions starting on December 28.

Under the relaxed restrictions:

As of December 13, Singapore has reported 58,325 cases of coronavirus and 29 deaths, according to Johns Hopkins University.

German biotech company CureVac announced Monday that it had taken a step forward in the development of its coronavirus vaccine.

The Tübingen-based company said it has started a Phase 3 clinical trial with an expected enrolment of more than 35,000 participants at sites in Europe and Latin America.

We have reached another important milestone in the development of our vaccine candidate, CVnCoV," CureVac CEO Franz-Werner Haas wrote in the statement.

The vaccine candidate uses mRNA technology, like the Pfizer/BioNTech and Moderna shots.

Following completion of the trial, subjects will continue to be monitored in a one-year extension study, which will collect additional data to evaluate long-term safety, persistence of antibodies and the duration of efficacy.

Eleven months after the earliest recorded case of coronavirus in the United States, medical workers are preparing to give the first doses of the Pfizer-BioNTech Covid-19 vaccine, with deliveries set to arrive at administration sites from around 8 a.m. ET.

Thousands of vials of the vaccine were collected for distribution across the country Sunday after it passed its last regulatory hurdle.

"We expect 145 sites across all the states to receive vaccine on Monday, another 425 sites on Tuesday, and the final 66 sites on Wednesday, which will complete the initial delivery of the Pfizer orders for vaccine," Gustave Perna, chief operating officer of Operation Warp Speed, said Saturday.

It's up to states to allocate their share of vaccines, but the CDC has recommended that frontline health care workers and residents of long-term care facilities get the vaccine first. Officials warn it could take months before the vaccine becomes available to many Americans as the virus continues to surge, breaking grim state and national records.

Death toll: More than 30,000 Americans died due to Covid-19 in the first 13 days of December, according to data from Johns Hopkins University (JHU). It put the country's death toll since the beginning of the pandemic at nearly 300,000 as of Sunday night, with more than 16.2 million reported cases.

And hospitalizations have remained above 100,000 for 12 consecutive days, breaking records for eight days in a row Sunday, the Covid Tracking Project (CTP) reported. 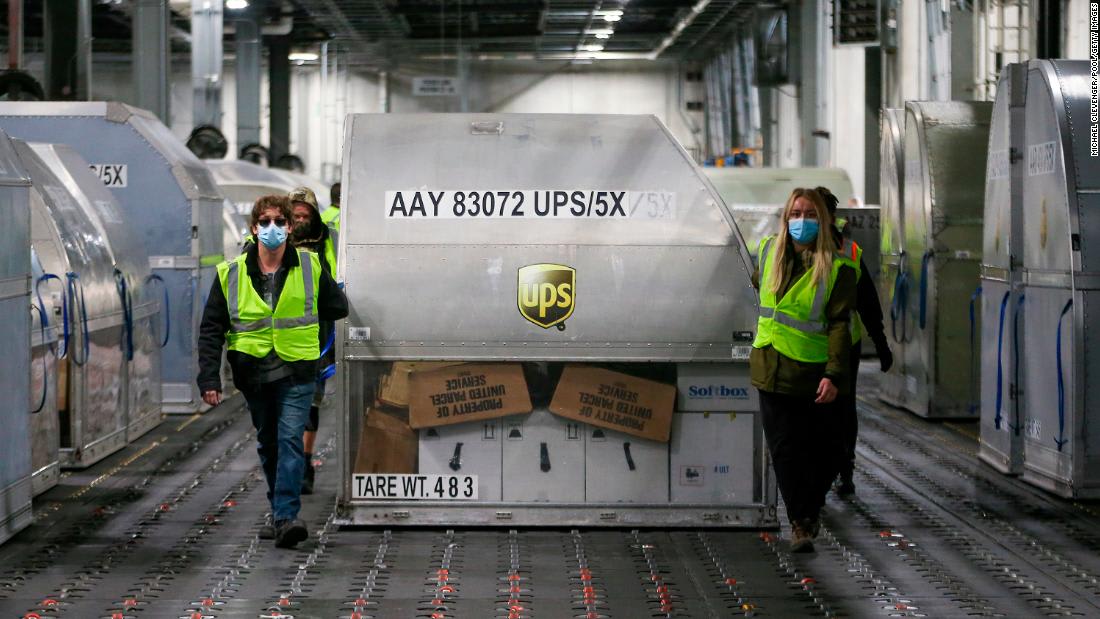 US readies for first Covid-19 vaccinations as country nears 300,000 deaths

South Korea's "third wave" of the Covid-19 pandemic is expected to worsen with its caseload to increase, the Korea Disease Control and Prevention Agency (KDCA) warned Monday.

KDCA Commissioner Jeong Eun-kyeong predicted that daily cases will rise to between 950 to 1,200 in the near future, up from 718 new infections declared on Monday.

"Its pattern is different from the first and the second wave and we judge that this is the greatest crisis since the beginning of the pandemic," Jeong said.

Officials are particularly fearful over the spread of the virus through religious and nursing facilities, Jeong added.

As cases have spiked over the past week, 32% have been in patients aged over 60, Jeong said, warning that cases among elderly citizens will likely result in further deaths.

A religious facility cluster in western Seoul has grown to 162 patients with 22 new cases discovered, according to the KDCA.

Another religious facility in Dangjin, a city south of Seoul, was linked to 42 new cases on Sunday. KDCA's tracing team director Park Yeong-jun blamed a group meal taken in the unventilated facility.

Vaccine deal: South Korea has signed a vaccine agreement with AstraZeneca as part of its plan to acquire doses for 44 million people, with the hope to complete contracts with two other vaccine developers by the end of the year.

"This is a major milestone for science, our country and our community. Thank you to all those who made this delivery possible, and are part of the incredible effort to distribute vaccines around the world," LAX tweeted shortly before 10 p.m. PT.

Running out of hospital beds: California reported 30,334 new Covid-19 cases on Sunday and 122 virus-related deaths, according to the state's Department of Public Health (CDPH).

Hospitals are filling up across the state; ICU capacity is down to 4.2% in Southern California, and even lower at 1.5% in the San Joaquin Valley.

South Korea's capital Seoul will move classes online for kindergarten, elementary and special education schools starting Tuesday through the end of the year, according to a news release from the city authorities.

Middle and high schools have already been closed and transitioned online.

Just outside of the capital, Gyeonggi province's Office of Education announced that all kindergartens, elementary, middle and high schools will also go online from Dec. 15 to Dec. 31.

Small schools -- meaning fewer than 300 students for elementary, middle, and high schools, and fewer than 60 for kindergartens -- had previously been excluded from closures. They will now have to transition online as well.

This comes as South Korea declared 718 new Covid-19 cases on Monday, with 217 in Seoul, according to the Korea Disease Control and Prevention Agency.

German Health Minister Jens Spahn has called on the European Medicines Agency to speed up the approval process for the Pfizer-BioNTech vaccine.

“All necessary data from BioNTech is there. US and UK have already granted authorization. An evaluation of the data and authorization by EMA should happen as fast as possible,” Spahn wrote in a series of tweets on Sunday evening.

“This is also about people’s trust in the ability of the European Union to act,” Spahn added.

Germany is seeing a surge in both coronavirus infections and deaths. The country is close to finishing construction of dozens of vaccination centers across the country to distribute the vaccines once they are approved, Spahn wrote.

German Chancellor Angela Merkel announced Sunday that the country will go into a "hard" national lockdown, starting next week and continuing through the Christmas period.

Dr. Francis Collins, director of the US National Institutes of Health, has warned that the pandemic could drag on if not enough people get vaccinated.

Some 70-80% of the public needs to be immune before the virus “basically gives up and it will be gone,” Collins told NBC’s Chuck Todd on Sunday. “We think we can get there by June or so for almost all of the 330 million Americans who are interested in getting this vaccine."

“But if only half of them do so, this could go on and on and on,” he said.

On vaccine safety: Collins pointed to the way that the vaccines were designed, tested in trials, the careful analysis by objective scientists and then going before the US Food and Drug Administration and public review, as points of confidence for the vaccine.

“I think there have been few, if any, vaccines that have ever been subjected to this level of scrutiny,” he said. “This was based upon scientific decision making of the most rigorous sort. I'm part of that. I'm talking out of knowledge of having been totally immersed in this, a hundred hours a week since last January.”

"The first batch of doses of Pfizer-BioNTech’s Covid-19 vaccine have arrived in Canada," the tweet said, along with a photo of an airplane sitting on the runway.

The vaccines come as the country struggles to get its infections under control. Several provinces -- including Quebec and Ontario, Canada's two biggest -- said last week they were facing a rise in numbers, despite new restrictions and lockdowns.

“I know we’re all tired, but we need to make an effort,” said Dr. Mylène Drouin, Montreal’s public health director, during a news conference Thursday.