UK-Swedish pharmaceutical giant AstraZeneca has signed a memorandum of cooperation with Russian makers of Sputnik V coronavirus vaccine during a video conference chaired by President Vladimir Putin on Monday.

Joint clinical trials to test the combination of AZD1222, the vaccine developed by AstraZeneca and Oxford University, and Sputnik V, developed by Russia's Gamaleya Research institute, will be part of this cooperation.

"In the nearest future, basically as we speak, the clinical trials are to begin. They will not require, as far as I understand it, large investments and won't take long, for the simple reason that the two technological platforms on which the AstraZeneca and Sputnik V vaccines are build are fundamentally similar," the head of Gamaleya institute Alexander Gintsburg said in the video conference.

Russia's Sputnik V is an adenovirus-based vaccine, while AstraZeneca's AZD1222 is based on a chimpanzee viral vector.

Russia registered Sputnik V in August ahead of key large-scale phase III trials necessary to establish the vaccine's efficacy and safety. While phase 3 trials are currently ongoing, the country is already moving towards mass vaccination.

Kirill Dmitriev, head of the Russian Direct Investment Fund, which sponsored the development of Sputnik V, also announced that Belarus became the first foreign country to register the Russian vaccine.

First doses of the vaccine will be distributed among Belarussians in January 2021, the country's health minister Dmitry Pinevich said, according to Russian state-run news agency RIA Novosti.

UK business groups have warned of the impact of new Covid-19 travel restrictions on their supply chains.

Industry groups and leading firms have said they don’t expect food shortages in the days leading up to Christmas, but they warned of major disruption if the situation is not resolved quickly. Major UK ports have closed after France blocked trucks from travelling out of the UK because of fears of a new Covid-19 variant.

Other European countries have also imposed various travel restrictions on the UK. Brexit means the current trade arrangements between the UK and European Union are due to end on December 31, which could cause further disruption.

“Retailers have stocked up on goods ahead of Christmas which should prevent immediate problems. However, any prolonged closure of the French border would be a problem as the UK enters the final weeks before the transition ends on 31st December," the British Retail Consortium said.

Sainsbury's, one of the UK’s leading supermarket chains, said if nothing changes the UK will start to see gaps over the coming days on lettuce, some salad leaves, cauliflowers, broccoli and citrus fruit -- all of which are imported from the continent at this time of year.

Shane Brennan, the CEO of the Cold Chain Federation, which deals with moving frozen and chilled goods, said “Whilst we face no shortages now, we do need urgent agreements between the UK and EU Governments to find a way to safely allow freight movements to continue. This has been possible at every other stage through the pandemic. An extended period of stopped movement now will cause significant problems for supply chains in January.”

Seoul will double the number of Covid-19 dedicated intensive care unit (ICU) beds by the end of 2020 amid the latest surge in infections, acting mayor of Seoul Seo Jeong-hyup said on Monday.

Around 85% of hospital beds dedicated to infectious disease in the city are occupied, Seo said -- and 87 out of 91 ICU beds are currently occupied.

To cope with the latest outbreak, Seoul will add 105 more Covid-19 ICU beds by the end of the year, which will double the capacity, he said. Nine ICU beds will be added Monday.

Seo added that two patients so far have died while waiting for hospital beds.

In a statement on Monday, the Korea Disease Control and Prevention Agency said they are closely monitoring the news of a new coronavirus variant emerging out of the United Kingdom.

South Korea has yet to discover the reported variant in travelers arriving from the UK, KDCA said. Health authorities are reviewing whether to begin conducting whole-genome analysis of viruses sampled from UK travelers.

British Prime Minister Boris Johnson is expected to chair an emergency meeting with ministers Monday, as governments around the world step up efforts to contain a potentially fast-spreading new coronavirus variant.

Alarm over the new variant, which was first identified in England, has seen British travelers cut off from much of Europe and other parts of the world as countries move to impose restrictions on flights from the UK.

In a hastily called press conference Saturday, Johnson said the new variant appeared to "be up to 70% more transmissible," and was responsible for a significant rise in cases in London and southeastern England. Those areas would now be placed under a heightened form of lockdown, said Johnson.

The restrictions are the latest disruption to a Christmas holiday shadowed by the pandemic. As winter descends across the northern hemisphere, governments from Asia to Europe have tightened social-distancing rules and reintroduced lockdown measures to counter a surge in Covid-19 cases.

The discovery of the new, potentially fast-spreading variant has deepened concerns major restrictions will now continue long into the new year. 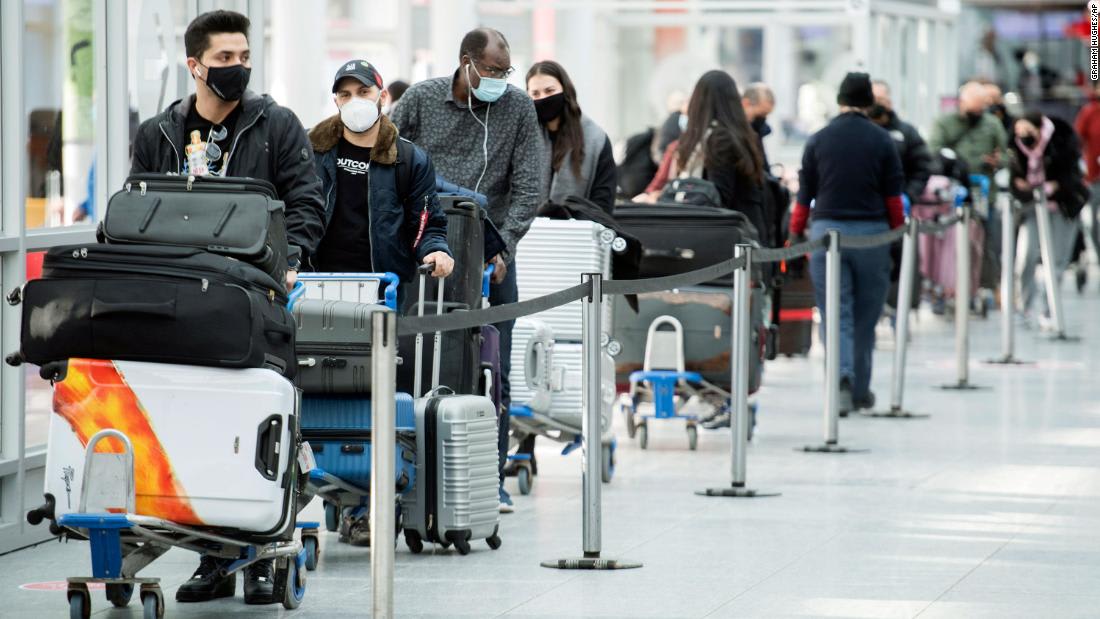 The European Union drugs regulator is meeting Monday to discuss authorization of the Pfizer/BioNTech Covid-19 vaccine.

If the European Medicines Agency (EMA) grants the vaccine a "conditional marketing authorization," it will be the first coronavirus vaccine approved for use in the EU. But before member states can begin rolling out the vaccine, the European Commission must give its final approval, which is expected on December 23.

The EMA is planning to hold a virtual press briefing at 9am ET on the outcome of the meeting of its human medicines committee.

Last week, European Commission President Ursula von der Leyen said it was “Europe’s moment” and that vaccinations would start across the bloc on December 27.

The EU has purchased over 2 billion doses of potential vaccines to ensure equitable access across the bloc since the summer. That agreement includes the purchase of 300 million doses of the Pfizer/BioNTech vaccine, which is enough to vaccinate 150 million of the EU’s 448 million citizens.

The EU vaccine agreement also includes the purchase of up to 160 million doses -- enough for 80 million people -- from US biotech company Moderna, who could receive EMA authorization as early as January 6.

Police in Kent are closing sections of England’s M20 motorway to “avoid gridlock across Kent” after the closure of the Channel Tunnel and Port of Dover.

Kent is the English county closest to France.

Operation Stack is being implemented on the coastbound motorway, the parts of the motorway where lorries usually queue before travelling to the continent, the Kent police said in a statement on Monday morning.

The move closes these specific sections of the road to regular traffic, instead using them to house freight transport stranded at the crossing. Freight will be separated into two queues on either side of the coastbound carriageway, 1 for tunnel traffic and 1 for port traffic. The middle lanes are kept clear for emergency vehicles, the statement continued.

The closure is an “emergency measure,” implemented by the Kent police and in consultation with other agencies.

France announced on Sunday that it would not be accepting any passengers arriving from the UK for at least the next 48 hours after the UK announced that it had detected a new variant of coronavirus.

Manston Airport in Kent is also being readied to take up to 4,000 lorries to ease disruption in the surrounding areas, England’s Department for Transport said.

After the UK announced that it had detected a new variant of the coronavirus, French Prime Minister Jean Castex announced a 48-hour ban on the movement of people from the UK to France, starting Sunday night.

Both the Port of Dover -- a key port between the UK and France -- and Eurotunnel, an underwater tunnel across the English Channel, have closed.

But on Sky News on Monday, Shapps played down the impact.

The port makes up around 20% of goods going in and out of the country, and on a regular Monday, around 6,000 lorries would arrive in Kent, he said. While those won't be able to continue, other crossings are open, he said.

According to Shapps, most good arrive into the UK in unaccompanied containers.

Shapps said that authorities were working to provide welfare for drivers, but added that it was important for the links not to be closed for too long.

“We obviously don't want these links to be closed for too long but it's not unusual for them to be closed and disrupted. There have been periods of some weeks with strikes in the past," Shapps said.
I'm in touch with my opposite number in France and we'll make sure we're doing everything we can to get that restarted, in fact they've said they want to restart the hauliers as quickly as possible."

The US has reported at least 17,844,690 coronavirus cases, including at least 317,668 deaths, according to the Johns Hopkins University tally.

At least 2,838,225 vaccine doses have been distributed and at least 556,208 doses of the vaccine have been administered, according to the US Centers for Disease Control and Prevention Vaccine website.

Friday saw the highest number of daily cases reported since the pandemic began.

California Governor Gavin Newsom (D) began a 10-day quarantine Sunday after a member of his staff tested positive for Covid-19, a statement from a spokesperson in the governor's office said.

The staff member who tested positive was in contact with Newsom and other staff members, according to the statement.

Newsom and other staff members tested negative for the virus Sunday, the statement said.

The governor and staff will be tested again over the next few days per state guidelines, according to the statement.