It's the big question many parents want to know – when can kids safely receive the vaccine and what should households do until then?

Dr. Anthony Fauci, director of the National Institute of Allergies and Infectious Diseases, offered some insight on the topic during CNN's Sesame Street Town Hall on Saturday.

"When you get a new vaccine you generally want to show the safety and the efficacy in an adult population," Fauci explained.

"Once you do, then you start doing trials, maybe a couple of months later, in the children so you can as quickly as possible get them the vaccine," he said.

"We're looking at January, we're going to start some trials in children. We'll start with children who are a bit older and work our way down, so that hopefully in a few months, we'll be able to tell children, what I know we'll be able to say 'the vaccine is safe and effective in you and we're anxious to get you vaccinated," Fauci added.

Asked if the vaccine will make Covid-19 disappear completely, Dr. Fauci said that's the ultimate goal, "to get rid of Covid-19 completely." 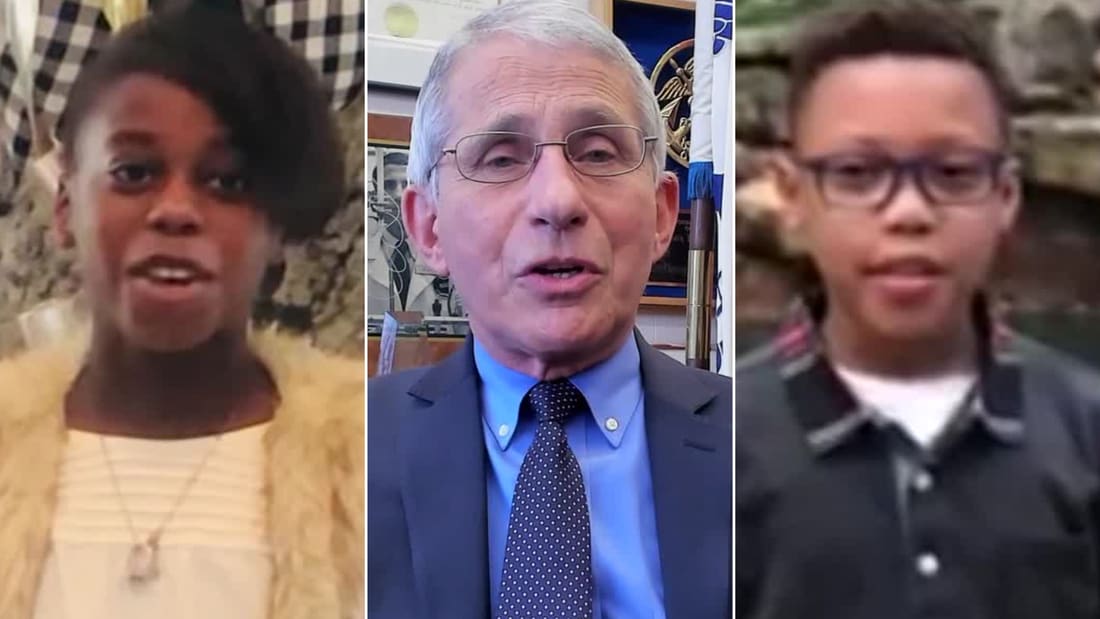 Dr. Fauci explains when kids will get vaccinated - CNN Video

Pakistan is suspending direct or indirect travel from the United Kingdom into the country.

According to a statement released by Pakistan’s aviation ministry the suspension will be in effect from Dec. 23-30.

The ban is for travelers who "originate travel and are in or have been in the UK over the past ten days."

Transit passengers traveling via the UK will be allowed access into the country permitting that they do not leave the airport in the UK.

Pakistani passport holders who have traveled to the UK on a visitor or a temporary visa will be allowed to return under certain conditions. This includes a negative PCR test 72 hours prior to travel and a PCR test on arrival. Passengers will be required to stay in a government facility until the test result arrives along with a mandatory enforced home isolation for a week.

All passengers who have already arrived from the UK in the past week will have to get tested.

This decision will be reviewed on Dec. 28.

Denmark has temporarily banned air travel from the UK for 48 hours until 4 a.m. ET on Wednesday.

Transport Minister Benny Engelbrecht said in a statement Monday that Denmark is "in a very serious situation" with infection widespread throughout the country.

"The government chooses therefore to close flights from the UK for 48 hours, so there is more time to assess what measures need to be taken," Engelbrecht said.

Christian Howard-Jessen, a press officer at Denmark’s Statens Serum Institut, told CNN they have detected ten people with the coronavirus variant in Denmark. All these patients were found two weeks ago or earlier and all of them have recovered, so there’s no known active case with the coronavirus variant in Denmark, Howard-Jessen said. At least some of these ten people had been to the UK.

Howard-Jessen explained that Denmark’s "huge testing capacity" led them to detecting these ten cases. "We sequence 20-25% of all test that are found positive for coronavirus. The consequence is that we will find a lot more cases than other countries," he added.

Moderna's candidate is the most recent vaccine to receive an emergency use authorization from the US Food and Drug Administration.

This is the second vaccines given the greenlight from health agencies: Already, more than 556,000 doses of the Pfizer/BioNTech vaccine have been administered, according to the US Centers for Disease Control and Prevention, and 2.8 million doses have been distributed to the facilities.

Spain’s government, in coordination with Portugal, will refuse entry to travelers from the UK starting tomorrow, Spain’s La Moncloa announced via social media on Monday afternoon.

Spanish citizens and residents are exempt.

The government also announced it will reinforce border controls in Gibraltar.

Some background: A new coronavirus variant discovered in the UK has prompted a new lockdown and travel bans.

But remember: There is no evidence the new variants are any more virulent, meaning they do not cause more severe disease. They do not appear to impact the effects of treatments or the protection offered by vaccines.

US stocks tumbled at the opening bell in New York Monday as worries over a new variant of the coronavirus overshadowed news of a second pandemic relief bill that was agreed in Washington late Sunday.

The House of Representatives is expected to vote on the deal on Monday before it goes to the Senate. Getting another stimulus deal was a top priority for investors over the past months, but now that it's here, the good news is overshadowed by the new virus developments.

The British government says it is working closely with its international partners after at least two dozen countries — including its closest neighbors — announced new restrictions limiting travel from the UK following the detection of a new variant of coronavirus.

According to the Prime Minister’s spokesperson, the UK Foreign, Commonwealth and Development Office (FCDO) is working to support British nationals affected by the travel disruptions caused by the new restrictions. They will be providing food, drink and toilets for British truck drivers currently stuck in gridlock in the area surrounding the Eurotunnel — a key gateway to Europe for the transport of freight to and from the UK.

During a briefing on Monday morning, Boris Johnson’s spokesperson tried to allay fears over supply chains being impacted by travel restrictions. He said the majority of food supplies to the UK do not come via the English Channel and asserted that Britain’s supply chains are "resilient," with many retailers having already stocked up on goods ahead of the Christmas period.

The Prime Minister is expected to give a press briefing Monday afternoon, after chairing an emergency COBRA meeting at Downing Street to address the fallout of the new international travel restrictions.

The European Union drug regulator has recommended authorizing the Pfizer/BioNTech Covid-19 vaccine for use, paving the way for the first phase of the bloc's mass vaccination program to begin later this week.

In a closed-door meeting in Amsterdam on Monday, the European Medicines Agency (EMA) granted the Pfizer/BioNTech vaccine a conditional marketing authorization, green lighting the drug for distribution.

"It's a decisive moment in our efforts to deliver safe & effective vaccines to Europeans," von der Leyen tweeted. "Now we will act fast. I expect a decision by this evening," she said.

The EMA's head of communications Marie-Agnes Heine called the move a "significant milestone in the fight against the pandemic" during a virtual press briefing with reporters.

The UK and the US granted emergency use authorization of the Pfizer/BioNTech vaccine earlier this month, and hundreds of thousands in those countries have since received their first shots.

Read more about the vaccine approval process in Europe here.

Over the weekend, the United Kingdom reversed plans to loosen restrictions over Christmas and announced strict lockdowns across much of the country, citing concerns about a variant of the coronavirus believed to be much more infectious.

Alarm over the new variant, which was first identified in the southeast of England, has resulted in British travelers being cut off from much of Europe and other parts of the world as countries imposed restrictions on travel from the UK.

While the new variant of Covid-19 is believed to originate in England, it has also been identified in Denmark, the Netherlands and in Australia, World Health Organization Covid-19 technical lead Maria Van Kerkhove said on Sunday. Researchers are investigating a similar variant of the virus in South Africa, prompting additional travel restrictions from there.

Remember: No evidence the new variants are any more virulent, meaning they do not cause more severe disease. They do not appear to affect the effects of treatments or the protection offered by vaccines

Here's a list of countries that have banned travel from the UK so far:

The following countries have not banned travel but are imposing restrictions:

Walter Reed scientists in the US still expect the vaccine will be effective against this new variant, said Dr. Nelson Michael, director of the Center for Infectious Diseases Research at the Walter Reed Army Institute of Research. The Walter Reed scientists said they expect to know in the next few days if there's a concern that the coronavirus vaccines might not work against it.