Over one million Pfizer/BioNTech vaccine doses have been administered in the United States, according to the US Centers for Disease Control and Prevention.

Doses distributed include both Pfizer/BioNTech and Moderna Covid-19 vaccines. Doses administered include only Pfizer vaccines. Administration of Moderna vaccinations just began on Monday.

The CDC notes there is a lag in data as it is reported to the agency; health care providers report doses to states, territories and public health agencies up to 72 hours after administration.

Here's how both vaccines compare.

The official Sputnik V Twitter account as well as a statement from the Russian Direct Investment Fund (RDIF-Russia's sovereign wealth fund) announced Wednesday that Argentina is the first country in Latin American to officially register the Covid-19 vaccine.

"Argentina was the first country in Latin America to officially register Sputnik V. The vaccine was registered under the emergency use authorization procedure and was approved by the regulator, ANMAT, based on the results of Phase III clinical trials in Russia, without additional trials in Argentina," the RDIF statement said.

Argentina Health Minister Gines González García tweeted Wednesday that an Aerolineas flight has arrived in Moscow and will bring back 300,000 of the first doses of Russia's Sputnik V vaccine.

"With its arrival in the country, a logistics never before carried out will begin, for a federal and equitable distribution with each of the Argentine provinces," he tweeted.

Florida Gov. Ron DeSantis plans to issue an executive order to ensure seniors, over the age of 65, are the first members of the general public to receive the Covid-19 vaccine. The announcement was made Wednesday during a press conference in Pensacola.

DeSantis said his order will guarantee seniors will be in the front of line to get vaccinated, despite the CDC recommending essential workers have priority as well.

“It makes no sense for someone that’s 42 to jump ahead of somebody that’s 70,” DeSantis said. “I want to make sure that if there’s one dose here in Pensacola left for this week, I want it to go to an elderly."

So far, about 70,000 shots have been administered to frontline health care workers and seniors in long-term care facilities in Florida, DeSantis said.

According to DeSantis, Florida has received 367,000 doses of the Moderna vaccine, which have been delivered to over 170 hospitals. County health departments are beginning to receive small amounts of the vaccine as well and will begin administering the shots to seniors as early as Monday, DeSantis said.

People traveling into New York City or returning will be required to sign the Commissioner’s Health order when arriving in the city and if found in violation, they will be charged $1,000 each time, New York City Mayor Bill de Blasio said.

“All travelers will receive a Department of Health (DOH) Commissioner’s Order to quarantine via certified mail,” the mayor said.

The sheriff’s deputy office will visit the home of every single UK traveler coming into New York City to make sure they are adhering to the mandatory travel quarantine, or they will be penalized, de Blasio said.

Prior to this order, New York City residents were subjected to $1,000 fines for not wearing face masks and violating social distancing rules.

People coming to New York City through airplanes and trains will be required to sign the Commissioner’s Health Order, de Blasio said.

At least 10,000 cars have been stopped by officials already, the mayor said.

New York City is working closely with the Port Authority of New York and New Jersey, a jointly run transit agency, and state authorities to make sure individuals are following the mandatory quarantine, de Blasio said. 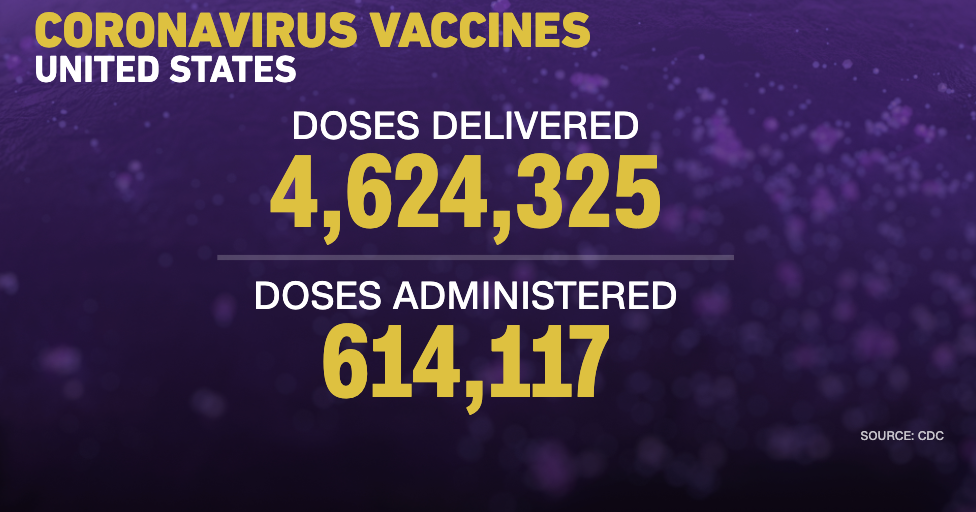 At least 4,624,325 vaccine doses have been distributed in the US and at least 614,117 doses of the vaccine have been administered, according to the US Centers for Disease Control and Prevention.

In terms of cases, according to Johns Hopkins University's tally, there have been at least 18,255,974 cases of coronavirus in the country. At least 323,274 people have died in the US from coronavirus.

The Trump administration is using its authorities under the Defense Production Act to “prioritize access to the critical materials and supplies necessary to expand vaccine production,” a Health and Human Services Spokesperson tells CNN in a statement.

The statement says Operation Warp Speed is using “selective application of DPA authorities” to facilitate production of the six vaccines it is supporting, including the Pfizer vaccine.

Today HHS announced it reached a deal with Pfizer to purchase 100 million more doses of the pharmaceutical company’s Covid-19 vaccine.

Pfizer had been seeking help from OWS to secure crucial materials in order to deliver the vaccine on an expedited timeline.

Tennessee Gov. Bill Lee extended the state of emergency through the end of February.

In the executive order published on Tuesday, Lee wrote that he is declaring "a continuing state of emergency and major disaster in order to facilitate the response to COVID-19".

It also encourages social distancing and "strongly urges" mask wearing, while not requiring either.

The latest numbers: Tennessee has at least 534,019 total Covid-19 positive cases, as of Tuesday's report. At least 2,934 patients are hospitalized statewide due to Covid-19, according to the most recent dashboard.

Note: These numbers were released by the state's public health agency and may not line up exactly in real time with CNN’s database drawn from Johns Hopkins University and the Covid Tracking Project.

AstraZeneca has summited the full data package for the vaccine it has developed with Oxford university to Britain’s Medicines and Healthcare products Regulatory Agency (MHRA), UK Health Secretary Matt Hancock revealed during a news conference on Wednesday.

“I'm delighted to be able to tell you that the Oxford AstraZeneca vaccine developed here in the UK has submitted its full data package to the MHRA for approval,” Hancock said. “This is the next step towards a decision on the deployment of the vaccine which is already being manufactured, including here in the UK.”

“Amid all this difficulty, the great hope for 2021 is of course the vaccine,” he also said.

“This new variant is highly concerning because it is yet more transmissible and it appears to have mutated further than the new variant that has been discovered in the UK,” Hancock said. “Both are contacts of cases who have traveled from South Africa over the past few weeks."

The Health Secretary announced new restrictions for travelers arriving in the UK from South Africa and also told those who have been in contact with people arriving from South Africa, in the past 15 days, to go into quarantine immediately.

“These measures are temporary while we investigate further this new strain which is shortly to be analyzed at Porton Down,” he said.