The safest way to celebrate the new year during the pandemic is at home with the people you live with, or online with friends and family, the US Centers for Disease Control and Prevention said in guidance posted to its website on Wednesday.

“Staying home is the best way to protect yourself and others,” it says, echoing guidance for other winter holidays.

For those that host a celebration, CDC suggests staying outside, limiting the number of guests, making extra masks available and keeping background music low to avoid shouting.

When attending a celebration, the agency says masks should be worn indoors and outdoors and alcohol and drugs that can alter judgement should be avoided.

“While it is possible that some people may receive COVID-19 vaccines before New Year’s Eve, continue taking steps to protect yourself and others for some time to come,” the CDC says.

CDC also suggests other activities, such as having a virtual celebration with loved ones, planning a New Year’s party for the people who live in a household, reaching out to friends, family and neighbors, watching live streamed fireworks or planning an outdoor activity.

“It’s okay if you decide to postpone or cancel your gathering. Do what’s best for you,” the guidance says.

If celebrating with people outside of your household, CDC suggests wearing a mask – even under a scarf when outside – and staying at least 6 feet apart, avoiding crowds and poorly ventilated spaces, washing hands, staying home if sick and getting a flu shot as soon as possible.

Holiday travel may also increase a person’s chance of getting and spreading Covid-19, and CDC continues to recommend postponing travel.

There have been at least 18,771,885 cases of coronavirus in the US and at least 330,345 people have died, according to Johns Hopkins University's tally of cases.

Here's a look at the states with the highest number of cases: 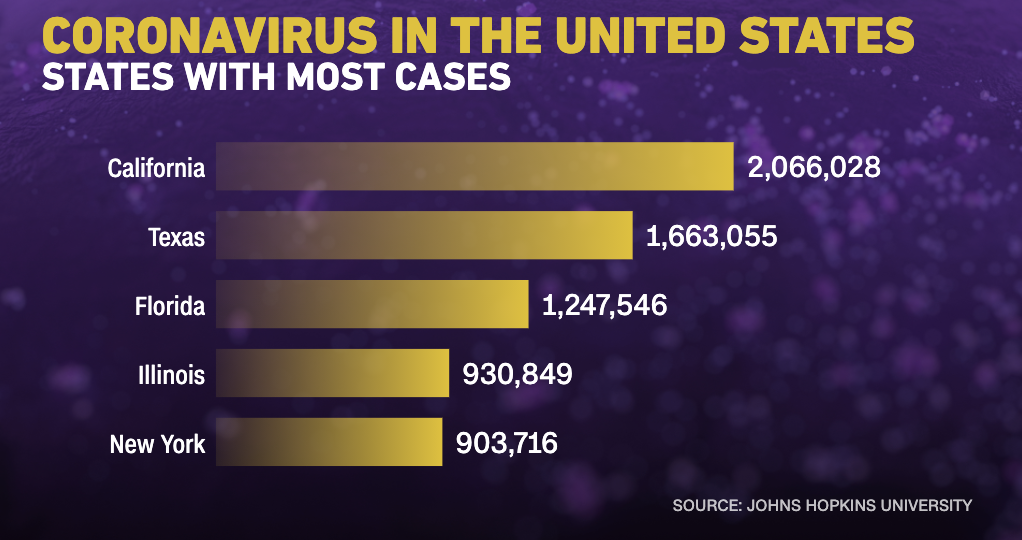 New testing requirements for travelers entering the US from the United Kingdom have not been implemented quickly enough to be effective against a reported Covid-19 variant in the UK, said Dr. Richina Bicette, medical director with the Baylor College of Medicine, on Saturday.

“It makes sense that for any place that’s experiencing a regional spike in cases that we put new measures in place,” Bicette told CNN. “But if they’re trying to make sure that the virus isn’t imported to the United States, these measures are going to have no effect on that whatsoever.”

“The CDC requirements don’t take place until Monday,” she said. “Until that time, there have been thousands, if not hundreds of thousands of people that have traveled into the U.S. from the U.K. So there’s a high probability that the new variant is already in the United States and we just don’t know.”

Passengers will be required to have a negative PCR or antigen test within 72 hours of boarding their flight from the UK to the US. Passengers are also required to provide documentation of their laboratory results, either as a hard copy or electronic.

Airlines are required to confirm the test results before the flight, and passengers will not be permitted to board if they refuse a test or do not provide documentation.

The order is in response to a new coronavirus variant that is said to have originated in the UK and is potentially more transmissible. Since the discovery of the variant, more than 40 countries have restricted travel from the UK, and in some cases, also travel from other countries that have documented cases with the variant.

The number of known cases of the novel coronavirus globally surpassed 80 million on Saturday at 12:20 pm ET, according to data held by the Johns Hopkins University Coronavirus Resource Center.

The United States leads with the most deaths and the most confirmed cases worldwide. There are at least 18,771,885 coronavirus cases in the US and at least 330,345 have died.

India, Brazil, and Russia following the US have the highest number of recorded coronavirus cases in the world.

In terms of deaths, the US, Brazil, India, and Mexico have the highest Covid -19 related mortality rates.

Here's a look at the countries with the highest number of cases: 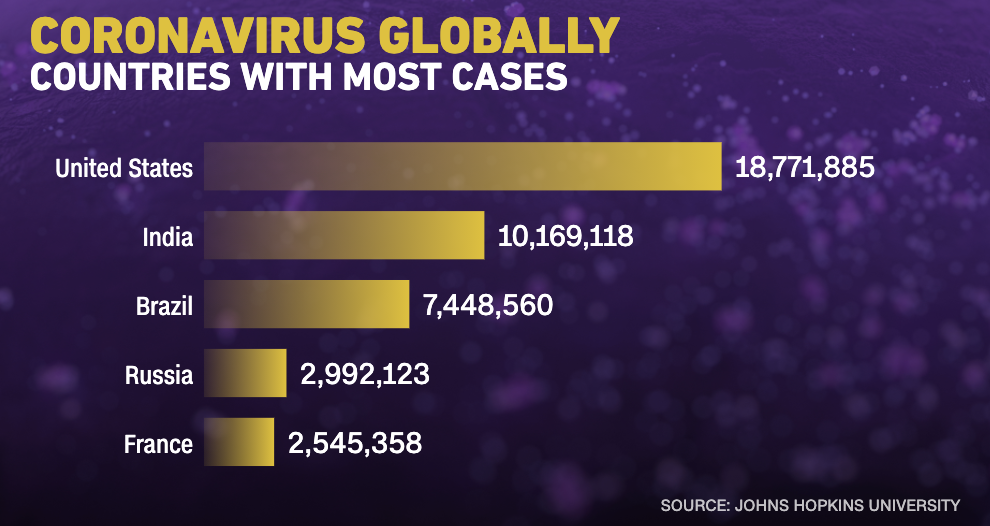 President-elect Joe Biden released a statement calling on President Trump to sign the Covid-19 relief bill that was passed by Congress, saying that any further delay has “devastating consequences.”

“It is the day after Christmas, and millions of families don’t know if they’ll be able to make ends meet because of President Donald Trump’s refusal to sign an economic relief bill approved by Congress with an overwhelming and bipartisan majority,” Biden said in the statement. "This abdication of responsibility has devastating consequences."

Biden continued: "And while there is hope with the vaccines, we need funding to be able to distribute and administer them to millions of Americans, including frontline health care workers. This bill is critical. It needs to be signed into law now."

The President-elect said the latest Covid-19 bill is a "first step and down payment on more action that we’ll need to take early in the new year to revive the economy and contain the pandemic  — including meeting the dire need for funding to distribute and administer the vaccine and to increase our testing capacity."

Some context: Though Congress has passed a $900 billion Covid relief package, millions of Americans are in danger of losing important benefits just after the holidays if Trump continues to refuse to sign the bill.

Over 3,100 new cases of Covid-19 are being reported in South Carolina today.

The numbers released by the South Carolina Department of Health are through 11:59 p.m. on Wednesday, according to the state's website. The 3,111 new cases reported today bring the state's total to 266,678.

The department of health is also reporting 74 new deaths related to Covid-19 for a total of 4,763.

South Carolina reported over 3,000 new cases six times in the month of December so far.

Prior to December, the highest daily reported new case total was 2,321 on July 18, according to the state's dashboard.

Note: These numbers were released by the South Carolina Department of Health and may not line up exactly in real time with CNN’s database drawn from Johns Hopkins University and the Covid Tracking Project

Even though vaccines are being administered across the United States, personal Covid-19 prevention measures are still important, Dr. Saju Mathew, a public health specialist, told CNN on Saturday.

“This is the most difficult part. You could have all the vaccines in the world and all of the wonderful therapeutics against this deadly virus. But what you have the least impact is on human behavior,” he said. “People are going to do what they want to do so what I’ve done is sort of change my messaging as a primary care physician to do more talking to people about risk reduction.”

Mathew said that those vaccines in use should still be effective against reported new variants of the Covid-19 virus, as the vaccines target a consistent physical part of the virus.

“Ultimately, the good news is even though there are 50 to 20 mutations, it hasn’t really affected the entire anatomy,” said Mathew. “I think the vaccines should work.”

A second round of stimulus payments that was included in a coronavirus relief package passed by Congress Monday night is now at risk if President Trump doesn't sign the bill.

The deal provided for $600 checks but the President indicated on Tuesday he would like that amount increased to $2,000 per person.

House Republicans, however, on Thursday blocked Democrats from increasing the amount — leaving the entire package in jeopardy. Democrats have seized on Trump's surprise objections to the bill in a bid to push Republicans to accept a higher amount for the stimulus checks — and Republican lawmakers are now in a difficult spot where they will be forced to decide whether or not they will defy the President.

Democrats vowed their effort isn't over, promising to move to pass a bill to increase the stimulus checks to $2,000 with a full up-or-down vote on the House floor on Dec. 28.

Here are key things to know about the Covid-19 stimulus checks:

Who gets the money fastest: The payments do not go all out at once. Those whose bank information is on file with the IRS will likely get the money first because it will be directly deposited into their account. Others will receive paper checks or prepaid debit cards in the mail.

About 90 million people — more than half of those eligible — received their payments within the first three weeks of April after the March deal was signed. Most people had their money within two months.

Still, about 12 million eligible Americans were at risk of not getting the money at all because the IRS had no way to reach them. While most people received the money automatically, very low-income people who don't normally file tax returns had to register online before November 21 to provide their address or bank account number.

IRS under pressure: If Congress keeps the eligibility requirements the same as they were for the first round of checks, the process may be nearly as easy as hitting a button. But it could complicate things if the parameters are changed —especially if Congress adds restrictions aside from income.

Additional checks may delay the start of the 2020 tax filing season. A second stimulus check means the agency will have to make changes to the tax return forms, some of which have already been sent to the printers.

Some background: In March, Congress provided individuals with $1,200 direct payments and couples with $2,400 plus $500 per child under the $2 trillion CARES Act.

As with that first round, the $600 payments included in the current legislation would start phasing out for individuals with adjusted gross incomes of more than $75,000, and those making more than $99,000 won't receive anything. The income thresholds would be doubled for couples.

At least 9,465,725 vaccine doses have been distributed in the US and at least 1,008,025 doses of the vaccine have been administered throughout the country, according to the US Centers for Disease Control and Prevention.

In terms of cases and deaths, according to Johns Hopkins University's tally, there have been at least 18,765,469 cases of coronavirus in the country and at least 330,302 people have died.