Whether there is a spike in new cases after people traveling for the holidays “really depends on what the travelers do when they get where they’re going,” Admiral Brett Giroir, US Health and Human Services assistant secretary, said on Fox News Sunday.

Giroir said that the actual physical act of traveling in airplanes, for example, can be quite safe because of air purification systems, but “what we really worry about is the mingling of different bubbles once you get to your destination.”

Over Thanksgiving, he said, there was a mixed picture. In the Midwest and Northern Plains cases continued to go down despite the travel, “which meant that people really did the kinds of things we talked to them about,” such as wearing a mask and limiting gatherings.

“We really have to wait and see,” Giroir said, adding that he really encourages people to follow US Centers for Disease Control and Prevention guidelines, make family gatherings small and safe and protect the elderly.

Former commissioner of the US Food and Drug Administration Dr. Scott Gottlieb said on Sunday that the idea of getting 20 million vaccinations administered by the end of the year is probably unrealistic at this point, when asked what he thought about the pace of Covid-19 vaccination by CBS’s Margaret Brennan.

On Saturday, the US Centers for Disease Control and Prevention reported 9,547,925 vaccine doses had been distributed and 1,944,585 had been administered.

“The pace is slower than what was stated, I think it’s probably realistic to think that the pace is going to be a little bit slower, especially as we try to move through hard to vaccinate populations next month,” Gottlieb said on CBS’s Face The Nation.

Gottlieb said that he suspected more than a million people have been vaccinated and that there is a lag in reporting, “but the idea that we’re going to get 20 million vaccinations by the end of the year, that’s probably unrealistic at this point.”

Gottlieb said to remember that this was after only about 45% of vaccines were shipped to states.

“I think they’ll get up and running and get better systems in place to distribute these vaccines more efficiently, I think they’re going to turn to CVS and Walgreens to start distributing them in the community and that’s a pretty big footprint,” he said. “But again, as you get out into the community and try to vaccinate a harder to reach population, it’s going to become significantly more difficult to get those vaccines out.”

The fact that there was a struggle to vaccinate health care workers and nursing home patients, “that shows we need to be investing more in these efforts,” Gottlieb said.

There have been at least 19,000,572 cases of coronavirus in the United States and at least 332,145 people have died from Covid-19 since the start of the pandemic, according to data compiled by Johns Hopkins University.

Virginia is reporting 3,998 new cases of Covid-19 Sunday, according to its Covid-19 dashboard.

The Virginia Hospital Covid-19 Dashboard reports 2,495 people in its hospitals with Covid-19, with 514 in the ICU and 318 on a ventilator. Thirty-three percent of the state’s ventilators are currently in use, the dashboard shows.

Note: These numbers were released by the Virginia Department of Health and may not line up exactly in real time with CNN’s database drawn from Johns Hopkins University and the Covid Tracking Project.

“We’re very concerned and we always see a little bit of a bump after holidays, and sometimes a large bump,” US Surgeon General, Dr. Jerome Adams, said on ABC’s This Week on Sunday, when asked about concerns about a post-holiday surge of Covid-19 and the number of people who traveled.

“The important thing for people to understand is that even if you traveled, it doesn’t mean you just throw your hands up in the air and say ‘oh well,’” Adams said. “There are measures that you can take.”

Adams noted the CDC recommendations that people get tested three to five days after travel or after being around people without masks being worn.

“Getting that test now means that if you were exposed to asymptomatic spread from someone else, we can find out and we can limit your ability to spread to others,” Adams said.

He also said that “you should definitely stay away from vulnerable people,” over the next fourteen days if you traveled, “so you don’t give them coronavirus from your holiday gathering.”

The new Covid-19 variant — first identified in England — has been detected in two people in Norway, according to the Norwegian Institute of Public Health (NIPH) on Sunday.

In a press release, the Institute said the variant had been detected in two people who had traveled from the United Kingdom in December.

NIPH Department Director Line Vold said additional testing and closer follow-up of close contacts would be carried out to reduce the risk of possible further spread. She also said that while there is “reason to be cautious, it is still uncertain how important a role the variant plays in spreading the virus.”

Usual measures to fight the pandemic, such as staying home if sick, testing, social distancing, quarantine measures and limited gatherings, are important to control this variant as well, she added.

On Saturday, the Public Health Agency of neighboring Sweden announced the variant had been diagnosed in the region of Sörmland, on the outskirts of Stockholm.

Sen. Pat Toomey, a Republican from Pennsylvania, says President Trump will be remembered for “chaos and misery and erratic behavior” if he allows the relief bill to expire, Toomey told Mike Emanuel on Fox News Sunday.

“As he leaves office, I understand he wants to be remembered for advocating for big checks but the danger is he’ll be remembered for chaos and misery and erratic behavior if he allows this to expire. So I think the best thing to do as I say is sign this and then make the case for subsequent legislation,” Sen. Toomey said of the President.

Toomey explained his own opposition to more coronavirus relief being “because it’s terribly untargeted,” continuing on that the money “should be targeted to people that actually lost their job.”

Sen. Bernie Sanders called on President Trump to sign the Covid-19 relief bill passed by Congress “right now” and implored the President to push for additional $2,000 payments to individuals after signing the bill.

“My view is, given the terrible economic crisis facing this country, yes, we need $2,000 out to every working class individual in this country, 500 bucks for their kid,” Sanders told ABC in an interview Sunday. “But you can't diddle around with the bill. Sign the bill, Mr. President, and then immediately, Monday, Tuesday, we can pass a $2,000 direct payment to the working families of this country.”

Sanders had been among the loudest voices pushing for $2,000 payments to people to be included in the $900 billion bill that only included $600 payments, which Sanders called “simply not enough.” Sanders also criticized President Trump for being absent during negotiations for the bill that now sits on his desk.

“Not a word,” Sanders said when asked if he’d heard from Trump during the negotiations of the bill. “Everybody assumed that Mnuchin was representing the White House.”

Sanders also commented that he suspects President-elect Joe Biden will make it a priority to provide further assistance to people once he takes office. 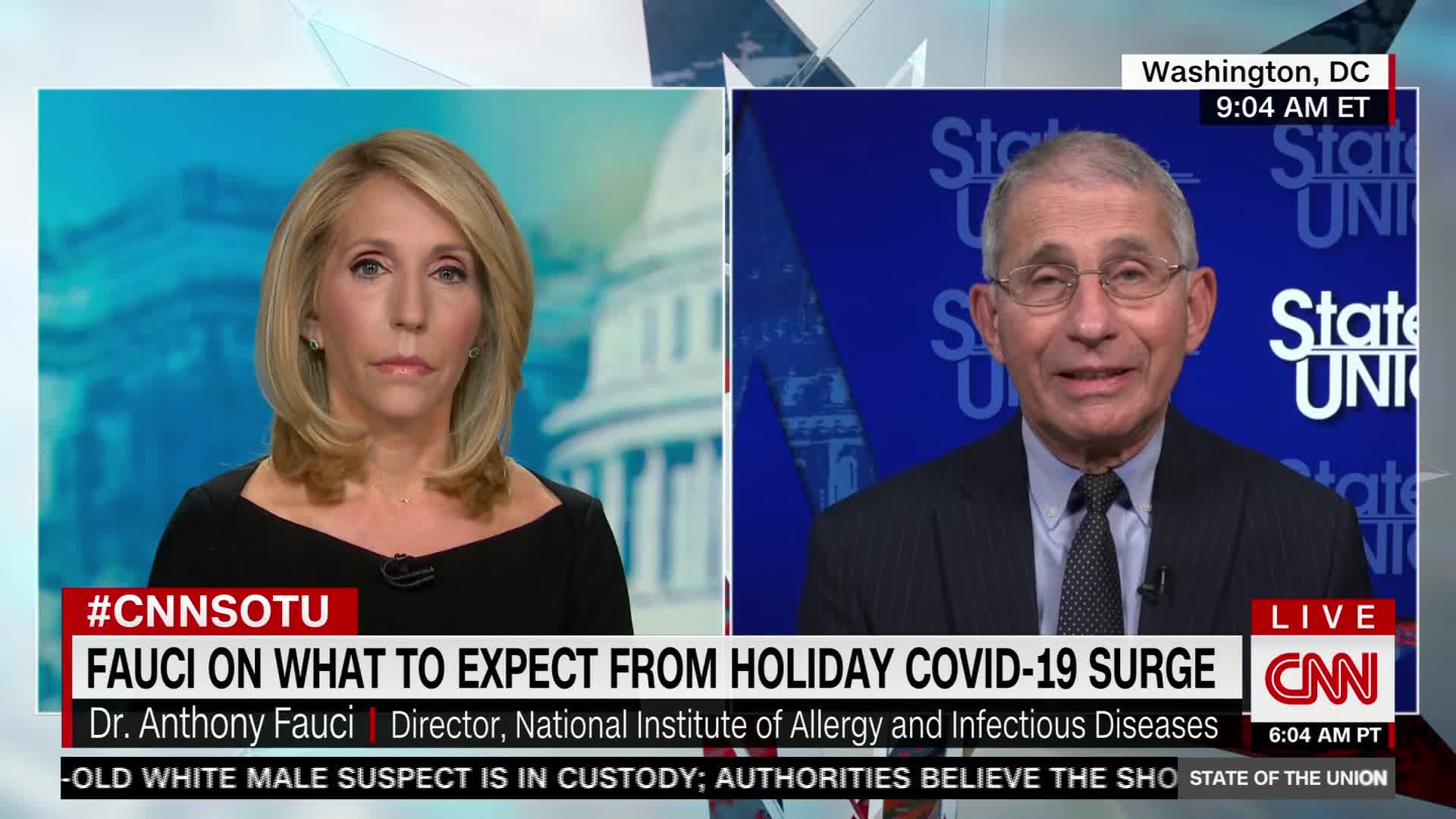 Dr. Anthony Fauci, director of the National Institute of Allergy and Infectious Diseases, told CNN’s Dana Bash Sunday that he wasn’t “going to say it was a mistake or not,” to not implement travel policies for travelers from the United Kingdom before the Christmas travel boom, but that the move to put some form of restriction on travel is “prudent.”

Fauci said he thinks it’s “a good idea to do some form of testing and not let somebody on the plane from the UK unless they have a documented negative Covid-19 test.”

“So, I agree with that,” he said. “I mean you could argue about the timing, whether it should have been done a few days before.”

Dozens of countries have banned travel from the UK to contain a new Covid-19 variant first reported in England.