The US Centers for Disease Control and Prevention says data suggests the new Covid-19 variant — first reported in UK and now reported in Colorado — has been circulating undetected in the United States and transmitted person-to-person.

"Public health authorities in Colorado detected a variant that was first identified in the UK, in a person who reported no travel history, the lack of reported travel history suggests this variant has been transmitting from person to person in the United States," Dr. Henry Walke, Covid-19 incident manager, said during a briefing Wednesday.

Walke said that even though there is no evidence that this variant causes more severe symptoms, or increase risk of death, they could lead to more cases and "put even more strain on our heavily burdened health care systems."

Additionally, Walke stated that as of today, there's no evidence of a second variant that was first identified in South Africa is circulating in the United States, and researchers are still learning how the two variants respond to different treatments.

"We're still learning how they might respond drugs, and other Covid-19 treatments including monoclonal antibodies and convalescent plasma," Walke said.

Health officials in Colorado confirmed on Wednesday that a member of the Colorado National Guard is the person who has the new Covid-19 variant case.

Officials are looking into a probable case in another guard member.

Both members were deployed to the Good Samaritan nursing home in Simla.

Officials would not confirm any additional details on the identities of the two guard members but did say that there is no travel history on either person.

The guard members were part of a team of six deployed to the Good Samaritan Society — Simla after a recent outbreak of Covid-19 hit residents and staff.

Dr. Rachel Herlihy, the state epidemiologist for the Colorado Department of Public Health and Environment, said during a news conference on Wednesday that they are still investigating how these two guard members were infected.

She said that health officials tested staff and residents in the facility yesterday and that additional testing will be performed today to see if anyone there has the variant.

Randy Fitzgerald, regional vice president of Good Samaritan Society, told CNN in a statement that they expect to know the results in the next few days.

"We will continue to work closely with the state while following vigorous infection control measures," Fitzgerald told CNN.

Herlihy said that they are currently doing contact tracing and quarantine orders will be issued to those who were in close contact with the person who has the positive variant. She said the quarantine period will be for 14 days.

"This new variant is just another reminder that there is a lot that we don't know about the virus," Polis said today.

Fitzgerald told CNN in the statement that the Good Samaritan Society — Silma will be vaccinating residents starting next week and that the vaccines will help keep the residents and staff members safe.

As CNN reported, the facility has experienced a Covid-19 outbreak in the past two and a half weeks.

Colorado health officials said today that all 26 residents and 20 of 34 staff members have tested positive for the virus so far.

Ireland will return to a full lockdown for "at least" a month — initially until Jan. 31 — in an attempt to get the latest surge in Covid-19 cases under control, Irish Prime Minister (Taoiseach) Micheál Martin announced on Wednesday.

The "Level 5" restrictions, which will come into force starting tomorrow, Dec. 31, include a ban on household visits and the closure of nonessential shops. Schools will remain closed until Jan. 11.

“With the presence of the new strain and the pace of growth, this is not a time for nuance in our response,” he said.

“We must apply the brakes to movement and physical interaction across the country," Martin said.

“You should stay at home except for travel for work, education or other essential purposes, or to take exercise within 5km of home," he added.

The Oxford/AstraZeneca Covid-19 vaccine may be authorized for emergency use in the US in April, Dr. Moncef Slaoui, chief scientific adviser for Operation Warp Speed, said Wednesday.

The Oxford/AstraZeneca vaccine was authorized for use in the UK Wednesday.

“As you know, that vaccine is in Phase three trials here in the US,” Slaoui said during a briefing. “We have almost totally completed the recruitment of that trial.”

Slaoui said the vaccine is being manufactured ahead of the potential authorization.

“If everything goes well, that read-out and emergency use authorization may be granted somewhere early in April,” he added. “By that time, several tens of millions of doses of this vaccine will have been manufactured.”

The Tennessee Department of Health has updated its Covid-19 vaccination plan which now includes administering to teachers and residents 75 and older.

The state's health department announced on Wednesday that updates to the current vaccination plan are being made based on new recommendations from the Advisory Committee on Immunization Practices and discussions with Tennessee’s Unified Command Group and a stakeholder group of more than 30 partner agencies and organizations.

K-12 teachers and childcare workers have also been moved up right behind frontline workers in the state's vaccination plan.

“COVID-19 vaccines remain limited at this time, and Tennessee’s allocation plan prioritizes those most at risk of illness and death from COVID-19,” Tennessee Health Commissioner Lisa Piercey said in a statement.

During a news conference on Wednesday, Tennessee Gov. Bill Lee said this layered approach that now includes teachers and residents 75 and older will make the state's vaccine distribution plan more efficient and effective.

The US is working to address a lag time in reporting on Covid-19 vaccine numbers, Operation Warp Speed officials said during a briefing Wednesday.

Recent data from the Centers for Disease Control and Prevention show 2.1 million Covid-19 vaccine doses have been administered in the US.

“Surely, it's a number that is smaller than the 14 million doses that are out there already available for use,” said Dr. Moncef Slaoui, chief scientific adviser for Operation Warp Speed.

The number is “lower than what we hoped for,” he added.

“We know that it should be better, and we're working hard to make it better,” Slaoui said.

Gen. Gustave Perna, chief operating officer of Operation Warp Speed, said he is personally working to address the 72- to 96-hour delay in reporting on vaccine numbers, noting that the data will “tighten up,” as reporting becomes more routine.

West Virginia Gov. Jim Justice announced that all elementary and middle schools will reopen to in-person learning on Jan. 19.

“During 2020, we learned that Covid-19 transmission rates in our schools during the first semester was 0.02% among students and…0.3% among our staff,” Justice said.

The governor said that despite their efforts, switching to virtual learning has not worked well for students in West Virginia.

He added that the West Virginia Department of Health and Human Resources reported a reduction in Child Protective Services referrals by an average of 50-54% a month.

The governor said the transmission rate among students aged 15 and up is significantly higher than that in children under 15.

"We are really doing well, in my opinion,” Perna said during a briefing. “Over 14 million doses of vaccine have been distributed to date, and every day we push more vaccine."

Perna did not say how many of those doses have been administered. The vaccine distribution process, he said, has entered a good cadence.

“This week we provided jurisdictions with the final allocations of doses available,” Perna said. “That means by tomorrow night, all the jurisdictions will be able to place orders for up to 20 million doses of vaccine, which has been collective over the last two weeks plus.”

Perna said the US is working to get people their second doses soon. 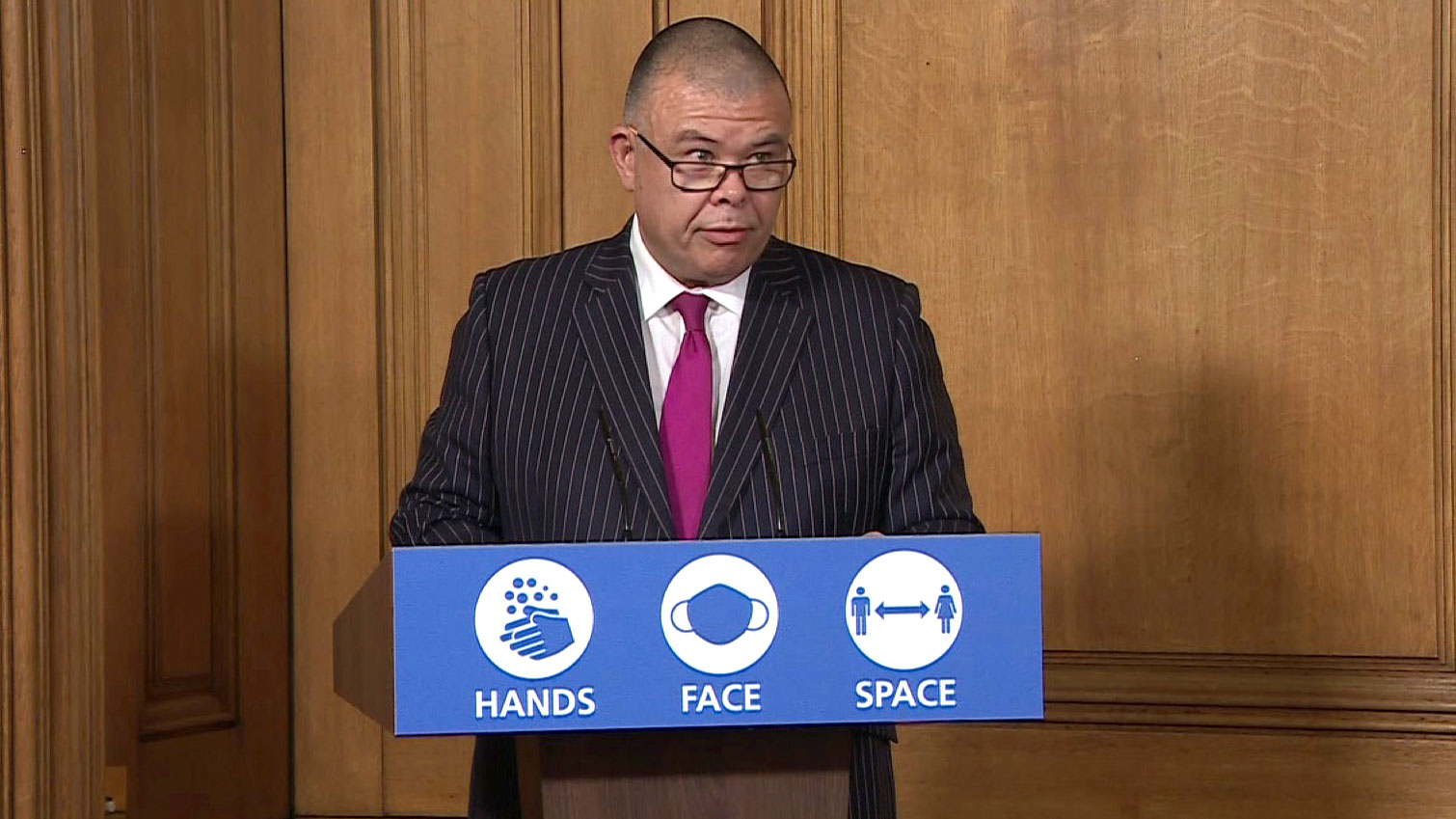 "It is a pretty grim and depressing picture at the moment" in England, Deputy Chief Medical Officer Jonathan Van-Tam told a Downing Street news conference on Wednesday.

"It is almost certainly true that the NHS has not yet seen the impact of the infections that will have occurred during mixing in Christmas and that unfortunately is rather sobering,” he added.

Echoing the prime minister’s call for the nation to stay at home over New Years, Van-Tam said: "You have just got to play your part now in bringing us back from this dangerous situation we find ourselves in.”