South Africa’s Covid-19 cases are “increasingly rapidly” at what looks to be “the fastest rate we have seen since the start of the pandemic,” Michelle Groome, head of the country's National Institute for Communicable Diseases (NICD), told CNN Wednesday.

Weeks after Omicron was first detected, it is now the dominant variant in some provinces, according to health authorities. In Gauteng province -- which includes the major city of Johannesburg -- the Omicron variant comprised 74% of sequences, said South Africa's Network for Genomic Surveillance on Wednesday.

The province has seen the sharpest rise in coronavirus infections in the last month, and testing is ongoing to determine the prevalence of Omicron in other districts.

Infections in South Africa appear to be surging, with around 8,600 daily cases on Tuesday, up from roughly 1,300 cases a week earlier, according to latest data from the National Institute for Communicable Diseases.

Groome said the rapid increase of cases was "concerning," adding that testing of wastewater had alerted authorities relatively early to infections in the Pretoria district.

"Two weeks ago we were seeing case numbers and positivity rates which were the lowest since the start of the pandemic," said Groome. She added that those numbers "have climbed rapidly to today" where scientists were looking at "positivity rates of over 15%."

For now, it was unclear whether the rise in infections was "due to increased transmissibility of the Omicron variant or due to immune escape," said Groome.

She added that cases had mostly been among younger people, which could be down to their increased social gatherings as schools broke up, as well as lower vaccination rates in that age group.

So far, doctors had observed "mostly mild cases," Groome said, putting it down to a mostly younger demographic presenting.

As cases move into the older population, doctors will have a better idea of "whether we are seeing reciprocal increases in hospitalizations and deaths associated with it, or whether this really is more a mild disease," Groome said.

The first case of the Omicron variant detected in mainland France has been identified in the northern Ile-de-France region, French health authorities said Thursday.

A statement from the Ile-de-France regional health authority said the case, a man between ages 50 and 60, tested positive on Nov. 25 following his return from a trip to Nigeria.

The man, who was unvaccinated, was asymptomatic at the time of the test and was placed into isolation with the group he was traveling with, authorities said.

His wife — who is also unvaccinated and traveled with him — also tested positive for Covid-19, but the sequencing of her variant is still ongoing, the statement said.

The first case of the Omicron variant recorded on French territory was detected on the island of Reunion, officials said Tuesday.

The Omicron coronavirus variant has prompted a fresh wave of travel restrictions and border closures as countries scramble to identify cases of the potentially more transmissible strain.

Omicron is the coronavirus "variant we were fearing," a French health expert said Thursday.

Speaking to CNN affiliate BFMTV, Jean-François Delfraissy, head of France's Scientific Council, said the new variant's 30 new mutations in the spike protein — the part of the virus targeted by vaccines — were a cause for concern.

Omicron “arrived from nowhere,” Delfraissy said, adding that the new strain was not an evolution of the Delta variant, which was responsible for the fifth Covid-19 wave in Europe.

“The real enemy, it's the fifth wave with the Delta variant,” he said.

Delfraissy said that while Omicron was spreading quickly, “Christmas is not in danger,” and “the response to Delta and Omicron is the same: booster shots.”

Anderson Cooper and Dr. Sanjay Gupta hosted a CNN town hall on the coronavirus Wednesday night, with guests including Dr. Anthony Fauci, director of the National Institute of Allergy and Infectious Diseases.

Much of the discussion focused on Omicron, including what we do and don't know about the new variant. Here are five main takeaways:

German citizens could potentially face tougher coronavirus restrictions as the country struggles to contain a fierce fourth wave of the pandemic.

Outgoing Chancellor Angela Merkel and her likely successor, Olaf Scholz, are holding crisis talks with regional leaders on Thursday to map out a way forward, a Tuesday statement from the Chancellor’s office said.

Tougher restrictions are likely to be agreed — many of which are set to target unvaccinated people. The goal is to bring down infection rates and ease the pressure on rapidly filling intensive care beds.

Among the range of measures being considered are the closures of bars and clubs, and limiting large events. Some hard-hit regions in Germany have already canceled Christmas markets and barred unvaccinated people from public spaces like restaurants, gyms and leisure facilities.

Germany's leaders are also set to discuss mandatory vaccinations. Earlier this week, Scholz signaled his backing for mandatory Covid-19 shots. The introduction of mandatory vaccines would have to be approved by Parliament.

Intensive care warning: On Wednesday, Germany recorded 446 Covid-19 related fatalities — its highest number of daily deaths in nine months. Many hospitals are struggling to cope with the increasing number of intensive care patients and German medics have warned that occupancy of intensive care beds could soon exceed that seen during last winter's peak.

The German Interdisciplinary Association for Intensive Care and Emergency (Divi) in a statement on Wednesday warned there could be about 6,000 Covid-19 patients in intensive care by Christmas —regardless of any measures implemented by Germany's leaders.

Germany reported 73,209 new cases within the past 24 hours, according to the Robert Koch Institute (RKI), the country's disease control center.

More than 102,000 people have died as a result of coronavirus in Germany, the RKI said. The country reported 388 new deaths related to Covid-19 from Wednesday to Thursday.

Just under 70% of Germany's population is fully vaccinated, according to the RKI.

Republican opposition to public health measures like vaccine and mask mandates has become one of the most difficult challenges facing President Joe Biden as he tries to fulfill his campaign promise to shut down the Covid-19 pandemic.

GOP leaders for months have blamed Biden for failing to stamp out the virus while becoming the party hellbent on protecting the rights of the unvaccinated, even if that means putting the health and safety of all other Americans at risk.

The Gordian knot they have created for Biden was on full display once again Wednesday when several Republican senators threatened to derail a stopgap measure that will avert a government shutdown Friday night unless their colleagues acceded to their demand for a vote on defunding Biden's vaccine requirement for large employers.

With unvaccinated Americans now about three times as likely to lean Republican as Democratic, Biden has found few influential GOP allies to help him push his case for vaccinations in deep red areas where Americans remain most resistant to getting them.

Summing up what has become a central talking point for GOP candidates as they head into the 2022 midterm primaries, Texas Sen. Ted Cruz told reporters on Wednesday that his party should "use every tool we have to protect people's rights, and the vaccine mandates are illegal, they're abusive and they're hurting this country."

But Senate Majority Whip Dick Durbin, an Illinois Democrat, warned that forcing a shutdown over a health measure intended to save lives would prove disastrous for the Republican Party: "I certainly hope they don't shut out the lights of this government (in) some kind of bold display of stupidity," he said. 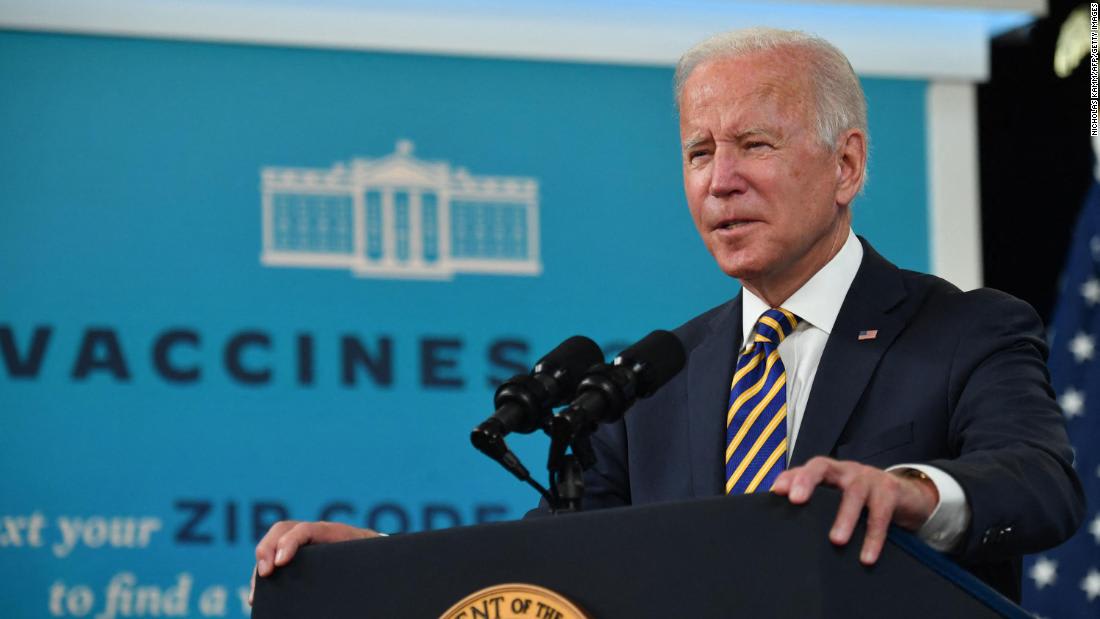 Analysis: Biden's path out of the pandemic meets a Republican blockade

Over the past five days, Manzhouli has been mass testing its 300,000 residents as it tries to stop a local Covid outbreak.

The city, which borders Russia, has so far confirmed 151 locally transmitted infections while the neighboring district of Zhalainuo'er has identified a further 32 cases, according to a CNN tally.

Residents in 55 of the city's neighborhoods have been banned from leaving their homes, while those in the rest of Manzhouli cannot leave their communities, the Center for Epidemic Prevention and Control said.

A fifth round of mass testing started on Thursday, according to the municipal government.

The recent outbreak began Nov. 27 when three asymptomatic cases were identified in Manzhouli.

China is the only country still following a zero-Covid model and, as such, moves quickly to eradicate any local outbreaks.

Japan has canceled a ban on accepting new reservations for inbound international flights, according to the Civil Aviation Bureau of the Ministry of Land, Infrastructure, Transport and Tourism.

On Wednesday, the Transport Ministry had asked airlines to refuse reservations on international flights to Japan over concerns of the Omicron coronavirus variant. It would have applied to all travelers — including Japanese citizens — from December 1 through December 31.

But Japanese Prime Minister Fumio Kishida later said he had instructed the ministry to reconsider the decision out of consideration for Japanese citizens’ need to return.

Kishida added the initial announcement had caused confusion while talking to reporters from his office on Thursday.

Airlines can now take new reservations as long as the number of passengers entering Japan remains below 3,500 a day — a limit on arrivals that was lowered from 5,000 last month, a transport ministry official said, according to Reuters.