Our live coverage has ended. You can read more about the Covid-19 pandemic here.

UK Prime Minister Boris Johnson warned the pressure on hospitals “is going to be considerable in the course of the next couple of weeks, and maybe more,” as Omicron cases surge.

The majority of people in the intensive care unit have not been vaccinated and “about 90%” have not received a booster dose, he told reporters on Monday, urging citizens to “get boosted”.

Despite all this, Johnson has resisted following the other UK nations in imposing restrictions on large gatherings to curb the spread.

“I think the way forward for the country as a whole is to continue with the path that we're on,” he said.

“We'll keep everything under review, of course we keep all measures under review. But the mixture of things that we're doing at the moment is, I think, the right one.”

Johnson asked people to take England's current measures “seriously,” which include working from home where possible, wearing a mask on public transport and taking a lateral flow test before meeting up with others.

From Monday, students in secondary schools and above are advised to wear masks.

Johnson also cast doubt over reducing the self-isolation period from seven days to five, in line with new US guidelines.

“We’ll continue to look at the infectivity periods, but the key thing is, we don’t want to be releasing people back into the workplace when they’re still infectious,” he said.

“The risk is you increase the numbers of people going back into the workplace who are infectious by a factor of three, so you might perversely have a negative effect on the workforce. That’s the argument we’re looking at,” he said.

As students return to school from winter break, teachers and staff at all schools in Los Angeles County will be required to wear surgical grade or higher level masks, according to updated guidance from the LA County Public Health Department.

The county will also require masks for all outdoor activities where physical distancing is not possible, except while eating or drinking, according to guidance posted Jan. 1. The county recommends students wear well-fitting thick masks with a nose wire. Additionally, the department recommends eligible students and staff get their booster vaccine dose.

The public health department reported at least 21,200 new Covid-19 cases Sunday, noting the number can change due to the weekend reporting lag. The number of positive cases increased exponentially in recent weeks. On Friday, the county reported the “highest number of new Covid-19 cases,” with 27,091 infections. For the same date in 2020, the county had 15,129 new cases. However, more deaths were recorded last year – 290 people died on New Year’s Eve in 2020 compared with 12 last Friday.

“During this surge, given the spread of a more infectious strain of the virus, lapses can lead to explosive transmission,” Public Health Director Barbara Ferrer cautioned in a news release Sunday.

“Well-fitting and high-quality masks are an essential layer of protection when people are in close contact with others, especially when indoors or in outdoor crowded spaces where distancing is not possible. Although masks can be annoying and even uncomfortable for some, given that many infected individuals are spreading COVID 1 -2 days before they are symptomatic, the physical barrier tendered by a mask is known to reduce the spread of virus particles,” Ferrer said.

Students in the Los Angeles Unified School District, the county’s biggest district and the nation’s second largest school system, will return from break next week.

Concerns are growing about the impact the virus could have over the next several weeks as US students return to school.

In Atlanta, at least five metro-area school districts will begin with remote learning this week, as students prepare to return from the holiday break amid rising cases in the region. And in Washington, DC, public schools will be closed until Thursday as a winter storm thwarted plans for students and staff to pick up Covid-19 tests on Monday.

Other school officials are also changing their Covid-19 policies due to the explosion of the Omicron variant. Miami-Dade County Public Schools is requiring all adults entering its buildings and buses to wear masks upon return and has strongly encouraged students to wear masks as well.

Dr. Stanley Spinner, chief medical officer at Texas Children's Pediatrics, told CNN's Pamela Brown, "When our largest school system gets back, I think we are going to see our numbers increasing even more unfortunately as a result of that,"

While there may be "bumps in the road" as schools attempt to reopen in the new year amid a record surge in Covid-19 cases, Education Secretary Miguel Cardona said students have suffered enough and need to be back in class.

"Our expectation is for schools to be open full-time for students for in person learning," Cardona said on Fox News Sunday, noting the science has improved nearly two years into the pandemic and vaccines are available for school-aged children. "There's a level of urgency that we shouldn't lose around making sure that our children learn in person."

As schools restart under competing pressures, many teachers are asking officials to utilize distance learning while the latest wave is at its peak. In Massachusetts, teachers called for state officials to close schools during the worst of the surge, but were rebuffed by the education commissioner and Gov. Charlie Baker.

"There are a lot of tools and capabilities available to keep kids and adults safe in school, and we should do everything in our power to make sure that kids stay in school," Baker said, while also highlighting the state's test and stay program.

The picture was similar in New York City, where Mayor Eric Adams felt schools must remain open and rejected a request from the teachers union to begin the month with remote learning until the current wave of the virus subsides.

Read more about how schools are preparing for the new semester here.

Millions of American kids will head back to classrooms in the coming days -- just after new pediatric Covid-19 hospitalizations reached an all-time high.

And that has many parents wondering what's safe as the Omicron variant sweeps the country.

"We fear that it's going to get a lot worse, between getting together for the holidays and then getting back to school," said Dr. Stanley Spinner, chief medical officer at Texas Children's Pediatrics & Texas Children's Urgent Care in Houston.

Some cities and school districts are taking aggressive new measures.

In Washington, DC, all public school students and staff must show proof of a negative Covid-19 test before returning from winter break.

In New York City, public school students who test positive will get a week's worth of at-home tests so they can know when it's safer to return to school.

But do vaccinated students still need to wear masks? What should families do if they can't get Covid-19 tests? Should activities like choir and basketball practice be sidelined until the Omicron surge passes?

Read the full story to find out how several pediatricians and health experts answered some of the most critical questions from parents.

"Probably, in the month of February, or when necessary, we will start the vaccination with the fourth dose, because our first concern and priority is to protect the health and life of our compatriots," Piñera said.

About 86% of Chile – around 16.5 million people – have been fully vaccinated, the Chilean government has reported.

According to the Pan American Health Organization (PAHO), the country has one of the highest vaccination rates in the world.

At least 66 passengers on a cruise ship traveling from Mumbai to Goa have tested positive for Covid-19, according to Vishwajit Rane, Goa health minister.

The ship was halted by the Goa state government Monday after reports that a crew member had tested positive. More than 2,000 passengers and crew members were tested.

“The authorities will decide whether to allow disembarking of passengers from the ship,” said Rane.

Goa is one of the most popular destinations in India for Christmas and New Year celebrations. The state has reported a surge in cases in the last week as tourists have made their way to the coastal state to celebrate.

“We deliberated on various ways to ensure we don’t take any knee-jerk decision & ensure that citizens as well as tourists coming to Goa are safe," tweeted Rane. "In view of the spike in other states, appropriate measure will be taken in sync the overall guidelines of Government of India."

India has reported a sharp spike in Covid-19 cases, registering a total of 33,750 new cases of Covid-19 Monday morning.

And on Monday evening the national capital New Delhi reported 4,099 fresh cases in the past 24 hours.

The new year is starting with a massive influx of Covid-19 that's different from any other during this pandemic, doctors say.

"What's coming for the rest of the country could be very serious. And they need to be prepared."

Even health care workers are getting sidelined during the rapid rise of the Omicron variant, the most contagious strain of novel coronavirus to hit the US.

"Our health system is at a very different place than we were in previous surges," emergency medicine professor Dr. Esther Choo said.

"This strain is so infectious that I think all of us know many, many colleagues who are currently infected or have symptoms and are under quarantine," said Choo, associate professor at Oregon Health and Science University.

The new year is starting with a massive influx of Covid-19 that's different from any other during this pandemic, doctors say.

"What's coming for the rest of the country could be very serious. And they need to be prepared."

Even health care workers are getting sidelined during the rapid rise of the Omicron variant, the most contagious strain of novel coronavirus to hit the US.

"Our health system is at a very different place than we were in previous surges," said emergency medicine professor Dr. Esther Choo.
"This strain is so infectious that I think all of us know many, many colleagues who are currently infected or have symptoms and are under quarantine," said Choo, associate professor at Oregon Health and Science University.
"We've lost at least 20% of our health care workforce — probably more."

Don't get a false sense of security with Omicron: Early studies suggest the Omicron variant may cause less severe disease than the Delta variant, which still makes up a considerable portion of US Covid-19 cases.

But because Omicron is much more contagious, the raw number of Covid-19 hospitalizations could get worse, Dr. Anthony Fauci said.

"When you have so many, many cases, even if the rate of hospitalization is lower with Omicron than it is with Delta, there's still the danger that you're going to have a surging of hospitalizations that might stress the health care system," said Fauci, director of the National Institute of Allergy and Infectious Diseases. 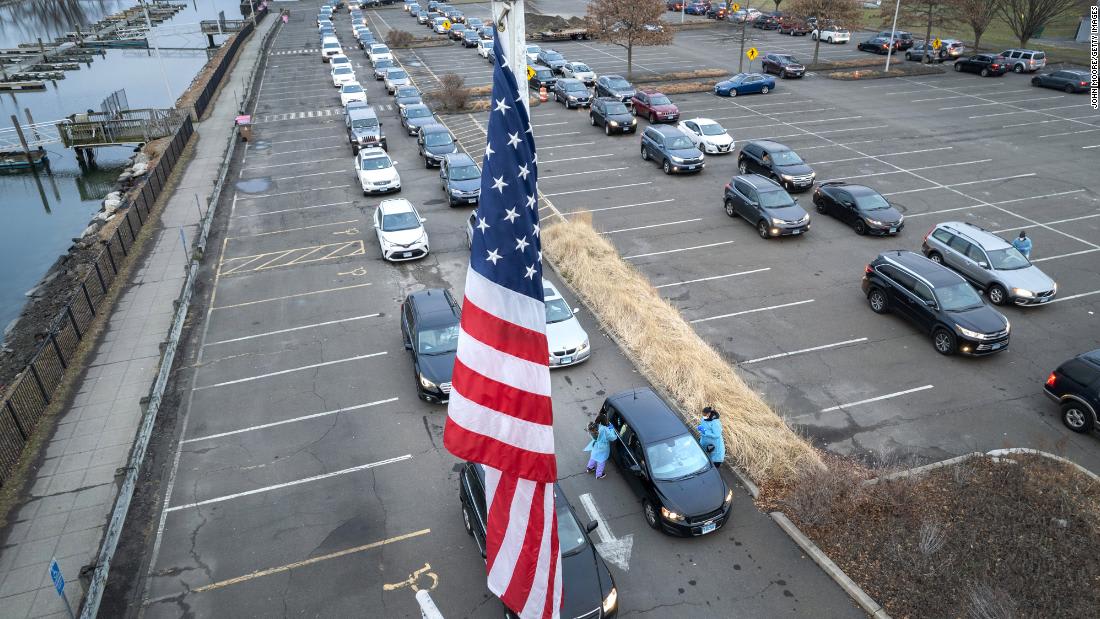 Lionel Messi is one of four Paris Saint-Germain (PSG) footballers to have tested positive for Covid-19, the club said in a statement on Sunday.

The other three players are Juan Bernat, Sergio Rico and Nathan Bitumazala.

All players are "in isolation and are subject to the appropriate health protocol," the ​team said.

PSG is scheduled to face Vannes in the French Cup's round of 32 on Monday.

France registered 232,200 new cases of Covid-19 on Friday, the highest daily number registered across Europe since the beginning of the pandemic, according to data from the country's Health Ministry.