Our live coverage of this story has ended. Read the latest here.

An ensemble forecast from the US Centers for Disease Control and Prevention published Wednesday predicts that over 62,000 more people could die from Covid-19 over the next four weeks.

According to data from Johns Hopkins University, the coronavirus has killed 842,322 people in the United States.

The CDC included projections that indicate the number of deaths will rise steadily over the four weeks.

Hospitalizations are predicted to increase for the eighth straight week, with the forecasts predicting 17,900 to 48,000 new confirmed Covid-19 hospitalizations reported on February 4.

There are currently 145,982 people hospitalized with Covid-19, according to data from the US Department of Health and Human Services.

The death and hospitalization forecasts caution that “current forecasts may not fully account for the emergence and rapid spread of the Omicron variant or changes in reporting during the holidays and should be interpreted with caution.”

The forecast for cases did not predict an increase or decrease, or give a predicted number of cases.

“Recent case forecasts have shown low reliability, with more reported cases than expected falling outside the forecast prediction intervals for 1-, 2-, 3-, and 4-week ahead case forecasts. Therefore, case forecasts will continue to be collected and analyzed but will not be summarized until sustained improvements in performance are observed,” the CDC said.

Switzerland will reduce its Covid-19 self-isolation period from 10 days to five, the Health Ministry announced Wednesday, citing “increased pressure” on the economy and society with several people in quarantine.

However current restrictions on social interaction, due to expire Jan. 24, should be extended until March 31, the Federal Council proposed.

These include a working from home mandate and a limit of 30 adults at private indoor gatherings if everyone is vaccinated against Covid-19, reduced to ten if someone is unvaccinated.

After consultation, officials will decide on Jan. 17 whether or not to extend these measures.

It comes as Switzerland’s “epidemiological situation is critical and remains difficult to assess”, the Health Ministry said, with pressure on hospitals “likely to rise” given the sheer volume of infections.

This is despite hospital admissions and occupancy of intensive care units falling in recent weeks despite a surge in the number of cases, it said.

The Biden administration is expected to announce the purchase of additional courses of a Covid-19 treatment manufactured by drugmaker AstraZeneca Wednesday.

The White House is “in the process of ordering another half-million courses of AstraZeneca’s preventive treatment for immunocompromised individuals,” Covid-19 response coordinator Jeff Zients is expected to say at Wednesday’s Covid-19 briefing.

“The federal government was instrumental in the research and development of this product – and our latest order will also bring us to over one million treatment courses available through end of March,” Zients is expected to say, per a copy of his remarks obtained by CNN.

The administration spent much of the past year focused on manufacturing and scaling vaccine supply. But as the Omicron variant continues to spread, with surging cases and hospitalizations, some experts have warned current efforts to surge supply of therapeutics are not enough.

More background: Therapeutics aren’t just being hampered by small supply. Some doctors are warning CNN they are also hampered by lack of testing to get test results in a timely enough fashion to actually administer doses in the proper window.

New global Covid-19 cases increased “markedly” in the week of Jan. 3 to 9, with over 15 million new cases being reported, according to the World Health Organization’s weekly epidemiological update published Tuesday.

This was a 55% increase in cases compared with the week before.

Five WHO regions reported an increase in cases, with the largest increase of 418% coming in the South-East Asia region. This was followed by the Western Pacific Region, 122%, the Eastern Mediterranean Region, 86%, the Region of the Americas, 78% and the European Region, 31%.

The African Region was the only one to report a decrease, 11%.

The highest number of new cases was reported in the United States, followed by France, the United Kingdom, Italy and India.

Globally, as of Jan. 9, there have been over 304 million confirmed cases.

While there was an increase in the number of cases, the number of deaths remained similar to the previous week, with over 43,000 new deaths being reported.

Two regions reported increases of deaths, the African Region, 84%, and the Region of the Americas, 26%. The Western Pacific Region reported a similar number of deaths to the previous week. Decreases were reported in the Eastern Mediterranean Region, 11%, the European Region, 10%, and the South-East Asia Region, 6%.

As of Jan. 9, there have been over 5.4 million deaths reported globally.

Wearing a face mask can reduce the distance that aerosols and droplets travel when someone is speaking or coughing – possibly by half, a new study suggests.

The study, published Wednesday in The Journal of Infectious Diseases, adds to mounting evidence that shows face masks help limit the spread of the coronavirus that causes Covid-19, and other airborne respiratory pathogens too.

Researchers at the University of Central Florida in Orlando conducted the study, involving 14 participants ages 21 to 31. Each participant recited a phrase and simulated a cough for five minutes in three different scenarios: without wearing a mask, while wearing a single-layer cloth mask, and while wearing a three-layered disposable surgical mask. N95 and KN95 masks were not included in the study. The phrase participants recited was, "The quick brown fox jumps over the lazy dog into a field of pretty playful perpetually purple pandas."

The researchers used high-power illumination instruments to detect aerosols and droplets coming from the participants as they spoke and simulated coughs.

The researchers found that without face coverings, droplets and aerosols traveled up to about 4 feet when someone was speaking, and up to 4.5 feet when coughing. The cloth mask reduced those maximum distances to about 2 feet for speech and 2.2 feet when coughing, and disposable masks reduced the distances further to 0.50 feet for both scenarios, according to the study.

"This study quantified that face coverings exhibit different distribution and velocity characteristics in comparison to without a face covering for both cough and speech," the researchers wrote in part in the study. "All face covering types reduce expelled volume and propagation distance, with the disposable face covering being the most effective at reducing both."

The researchers added that their findings suggest practicing a physical distance of 3 feet while wearing a mask appears to be equally as effective as 6 feet of physical distancing without a mask.

The current US Centers for Disease Control and Prevention recommendation for social distancing is to stay 6 feet apart.

Boris Johnson has apologized for attending a gathering in the back garden of 10 Downing Street on May 20, 2020, at which point Britons were prohibited from gathering due to strict coronavirus restrictions.

At the start of the weekly session of Prime Minister's Questions, Johnson said he did attend the gathering for 25 minutes before going inside to work. He said he believed the gathering to be a work event, but with hindsight conceded he should have sent attendees back inside.

Leader of the Opposition Keir Starmer said the UK Prime Minister's excuse that he "did not realize he was at a party" was ridiculous and "offensive." The Labour Party leader went on to ask if the Prime Minister would resign.

The Prime Minister's comments on Wednesday came after days of outrage over a "bring your own booze" event held at Downing Street during the height of the UK's first Covid-19 lockdown.

UK Prime Minister Boris Johnson has said in a statement to Parliament that he wants to apologize over a drinks party held at 10 Downing Street during the country's first lockdown.

“I know the rage they feel with me and with the government I lead when they think in Downing Street the rules are not being properly followed by the people they make the rules,” Johnson said.

“I must take responsibility,” he said.

Labour leader Keir Starmer has called on UK Prime Minister Boris Johnson to resign over a party at Downing Street in May 2020.

Starmer called Johnson’s attempts to explain the party a “pathetic spectacle,” and called on him to "do the honorable thing" and resign during Prime Minister's Questions (PMQs) on Wednesday.

A leaked e-mail published on Monday showed one of Britain’s top officials invited staff to “socially distanced drinks in the No. 10 garden” on May 20, 2020, when the country was under strict coronavirus restrictions.

Johnson said he "wanted to apologize" over the party in his opening statement on Wednesday.

“I must take responsibility,” he said.

Johnson later added that misjudgments were made and that he apologizes for them.

“I want to repeat that I thought it was a work event and Mr speaker I regret very much that we did not do things differently that evening," said Johnson.

In the lead up to Wednesday's PMQs, various British lawmakers called on Johnson to resign if he has misled Parliament about whether he was present during the party.

“If he has breached his own guidance, if he has not been truthful, then that is an extremely important issue. If the Prime Minister has misled Parliament, then he must resign," Douglas Ross, the leader of the Scottish Conservatives, told Sky News on Tuesday.

Other Conservative MPs have been sharing their anger and frustration.

Christian Wakeford, Conservative MP for Bury South, tweeted: “How do you defend the indefensible? You can’t! It’s embarrassing and what’s worse is it further erodes trust in politics when it’s already low.”

Speaking to the BBC, Rayner said: “if he was at that party, he knows he broke those rules and has to act accordingly.”

Ian Blackford, leader of the Scottish National Party in Westminster, added to calls for Johnson's resignation.

Blackford told Sky News that if Johnson had broken ministerial code, he would "have to go."

This would “really stick in the throat of people” who had not been able to grieve properly for those who had died at the time the party was held," added Blackford.

On the day the party is alleged to have happened the UK recorded 268 deaths on its coronavirus dashboard.

On Tuesday a group of people who lost family members to Covid-19 wrote to Johnson to express their anger over the fresh evidence that parties took place during lockdown.

“On the 20th May 2020, my dad’s death certificate was being signed. We were arranging his funeral 30 years too early…" Brady wrote Tuesday on behalf of a group named COVID-19 Bereaved Families for Justice.

"I had to stand and watch my grandparents break down over a hole in the ground, terrified that if I went near them they would catch Covid and die too,” she added.

Boris Johnson is facing perhaps the toughest day of his political career to date on Wednesday as outrage mounts over a "bring your own booze" event held at Downing Street during the height of the UK's first Covid-19 lockdown.

On Monday night, it emerged that his principal private secretary, Martin Reynolds, had emailed an invitation to more than 100 Downing Street staffers to "socially distanced drinks in the No. 10 garden" on May 20, 2020.

The email, which has been independently confirmed by CNN, told guests to "bring your own booze" and "make the most of the lovely weather."

This happened while the UK was in a hard lockdown to combat the spread of Covid-19. At the time, people in England were banned from meeting with more than one other person outdoors, and would be legally punished for doing so. In workplaces, official guidance stated that in-person meetings should only take place if "absolutely necessary."

Johnson has refused to deny reports that he and his wife, Carrie Johnson, attended the event. But later Wednesday Johnson was set to face questions in Parliament on whether he was there; whether he knew about the drinks or sanctioned them; and whether he misled Parliament about a series of parties reportedly held at Downing Street during several lockdowns in 2020. 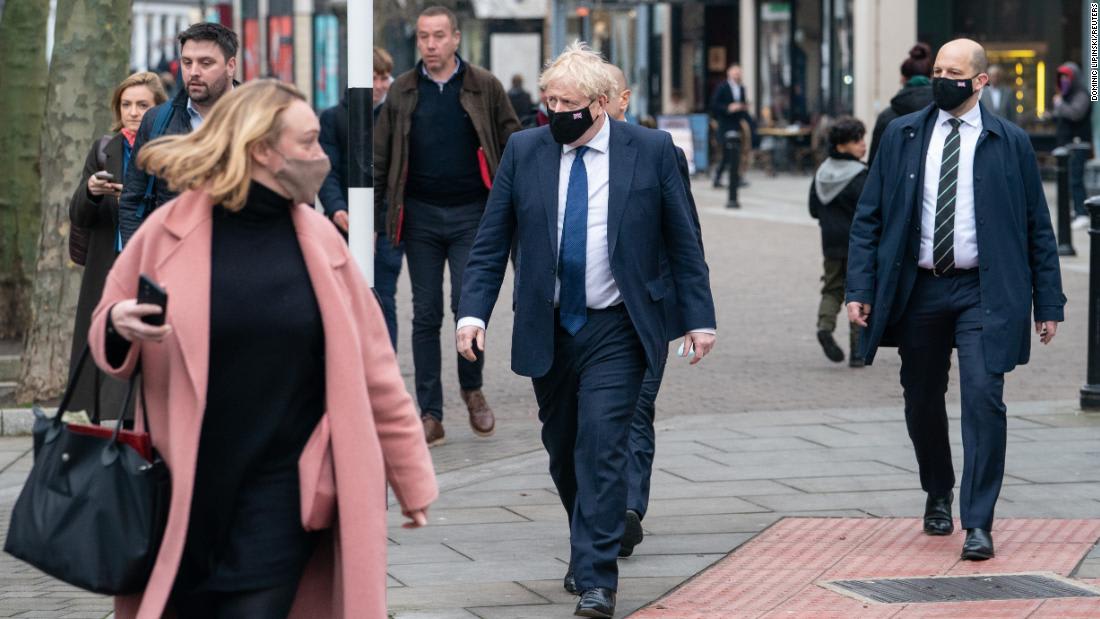