This ends the Olympic player's campaign along with his partner Wesley Koolhof.

"Rojer and his partner Wesley Koolhof have been withdrawn from the men's doubles event, and their opponents Marcus Daniell and Michael Venus of New Zealand receive a walkover into the quarterfinals," the ITF said in a statement Monday.

"We wish Jean-Julien a speedy recovery," the statement added.

Rojer is the fourth athlete from the Netherlands' team to test positive for Covid-19 in Tokyo, according to CNN reporting.

Masks are a "must-have" on the podium at. Tokyo 2020 but athletes will be allowed to take them off for 30 seconds for a photo, the International Olympic Committee (IOC) has decided, according to spokesman Mark Adams.

The adjustment to the IOC's stance for Olympic athletes wearing masks on the Olympic podium was made after discussions, Adams added at Monday's press briefing.

This comes after Adams told reporters during an off-camera interview that there were no relaxations around mask rules for anyone at the Games.

Great Britain's Tom Daley and Matty Lee edged out hot favorites China to win gold in the men's synchronized 10m platform diving, with a score of 471.81.

Daley — a national hero in Britain since making his Olympic debut as 14-year-old in 2008 — had tears in his eyes as he finally added gold to the bronze medals he won at London 2012 and Rio 2016.

His partner Lee was making his Olympic debut, but the British divers produced an impeccable performance in order to end China's winning run in the discipline that extended back to 2000.

China's impressive duo of Cao Yuan and Chen Aisen clinched silver with a score of 470.58, whilst Aleksandr Bondar and Viktor Minibaev of the Russian Olympic Committee won bronze with a score of 439.92.

Decorated Australian surfer Stephanie Gilmore suffered an upset in her round of 16 clash against South Africa's Bianca Buitendag on Monday.

Few would have expected Buitendag to stand a chance against the world No. 5, but some indecision from Gilmore proved costly.

The 33-year-old chose to pass up on a wave, Buitendag rode it instead and posted a decisive score of 7.10 — surfers are ranked using their two highest scores.

“I was so fired up, yesterday was such a good heat," Gilmore said. "I was feeling really confident, really strong. Bianca is a really tough opponent. Both of us are probably the tallest girls in the whole event, so it was a really level playing field.

“Her backhand is really strong. I let her get that wave on the priority, and she got the highest heat score. I looked at that wave and was like, it doesn’t look that good. I let her have it. She turned it into a seven (point score), that was the most frustrating for me.

“I should’ve taken that wave and just kinda held that control of the situation. It’s a tough one. I still had a good five minutes in the end to try and make it, but I just couldn’t do it today.”

Gilmore, who will be 36 when the Paris Olympics are held in 2024, says athletes like Serena Williams remaining competitive at an older age is providing her with motivation.

“(I’m) super disappointed that I couldn’t make it happen, but there’s always Paris (in 2024)," she said. "I’m only 33 and there’s plenty of amazing female athletes who get up into their forties. Look at Serena Williams, she’s still doing so well. So there’s plenty of time.

“To come here and to be an Olympian is very special but to not get the result I wanted I’m really thinking, ’what did I do wrong, what can I do better and how do I get back?”

The women's 400 meter freestyle final was one of the most hotly anticipated races at these Tokyo Games — and it certainly delivered on the drama.

Ariarne Titmus fought her way back to overtake two-time defending Olympic champion Katie Ledecky and earn Australia's first gold in this event since 1972.

However, despite the intense pressure the two swimmers must have been feeling, 20-year-old Titmus remained remarkably calm — both during and after the race.

“Coming into the race my mind was very clear," she said. "I wasn’t thinking about splits or that kind of thing, I just swam intuition — the training that I’ve done, my body just knew what to do. I just tried to stay composed.

“Honestly, I didn’t even look at the time. I just saw ‘one’ against my name, and once I saw that I was just kind of, like, ‘yeah, whatever.' But it’s a PB so that’s good.

“I do feel pressure, but I feel like I do a good job at kind of eating it all up and using it. I’ve been very relaxed at this meet, more relaxed than I thought I would be. I was way more nervous swimming at trials than I was tonight.

“This is what we work for, I’m at the Olympic Games. I’m just trying to enjoy it as much as I can. As much as this isn’t a normal Olympics with the Covid protocols, I’m still having great fun. For me, tonight was just being out there in a race, it’s the best part about swimming.

“I was excited that to win this event. I had to beat a great champion [Ledecky] and that makes it even more satisfying. She has done unbelievable things for this sport, and especially middle-distance swimming.

“I feel like if people back home can enjoy this moment like I can, I’m really happy that I’ve brought some joy to the country during a tough time.”

The 24-year-old Ledecky was full of praise for her opponent and said they had "both helped each other" over the past few years.

Despite not taking home the medal she wanted, the US superstar said standing on the Olympic podium is "not something I take for granted."

"It’s just great for this event, and all the freestyle events, to have had some really great competitors in the field," she said.

"We’ve only raced a handful of times, I guess probably on average once a year over the last five years. Each race is always a tough race and that’s something that motivates you in training.

“When we meet up it’s always a great race. I hope we have many more great races this week and in the future.

“Of course you always want to hear your national anthem, but I’m proud of how I swam and how I got to that point. It’s not an easy journey, it’s never an easy journey to the podium, and so it’s not something I take for granted, being up there.

“I think I just came into this race very much at peace with the work that I’d put in to get to this point.

“That’s the biggest win of all. I just knew, no matter the outcome, that I was going to put up a fight, and put up a great race, and I’m glad I did. Even if I didn’t I was still going to be happy for whoever won gold.

“I just felt a lot of joy and happiness and love coming into this race, and just kind of carried that with me. That’s the biggest win of all."

There was chaos at the start of the men's triathlon when about half of the athletes dived into the water to begin their swim while a boat was still blocking many of the competitors on the platform.

The starting gun seemed to be triggered too early, causing the boat to hastily reverse out of the way while race officials recalled those who had started their swim.

“I was caught up in that but it was kind of good but kind of annoying at the same time," Wilde said about the confusing start.
"I looked to the left and I was like, ‘oh man, I’ve had a great start, this doesn’t happen to me.' But then I realized that half of the field wasn’t actually there so we turned back.
"It was actually quite good to tick the arms over for 50 plus meters. But still, it kind of got the heart rate up a bit too much.
"It is what it is and you’ve just got to keep composed, and sometimes that happens and you’ve just got to roll with the punches.”

Editor's note: A version of this post appeared in CNN's Meanwhile in China newsletter, a three-times-a-week update exploring what you need to know about the country's rise and how it impacts the world. Sign up here.

The Olympics has long been an occasion for celebrating national pride. And for an increasingly confident China, the Tokyo Games is seen as the latest opportunity to showcase its national strength, as it looks to challenge the United States for top spot on the medal table.

So far, Team China has got off to a strong start, to the cheers of millions of fans online.

On Saturday, Chinese social media exploded in euphoria when shooter Yang Qian won the first gold of the Tokyo Games in the women's 10-meter air rifle. The 21-year-old also set a new Olympic record with a 251.8 final score.

As of Monday morning in Japan, China has bagged six gold medals — three in weightlifting, one in fencing and one in diving in addition to Yang's air rifle gold. That's enough to top the medal table, followed by Japan and the United States.

Nationalist sentiment: On Weibo, China's heavily censored version of Twitter, the Tokyo Games has been among the top trending topics since Friday evening. While many are rightfully proud of the Chinese team's achievements, the nationalist sentiment has at times been more aggressive.

The comment sections of top state media outlets like the People's Daily are among the most strictly censored corners of Weibo. The fact that the comment was allowed to receive nearly half a million "likes" and occupy top spot suggests at least official tolerance, if not encouragement of such rhetoric.

In other cases, the nationalist sentiment has gone too far even for Chinese censors. On Saturday, Yang was briefly attacked by some online nationalists and told to "get out of China" for having previously shown off her impressive collection of Nike sneakers on Weibo.

Nike, along with H&M and other big Western apparel brands faced calls for boycott in China in March, owing to their stand against the alleged use of forced labor to produce cotton in Xinjiang. 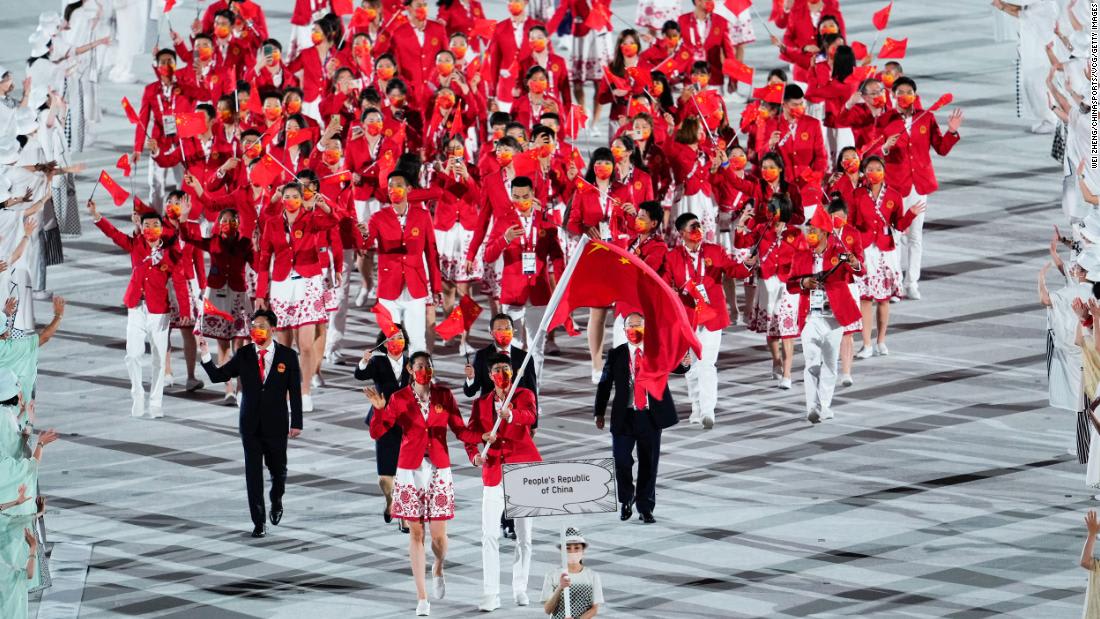 Basketball superstar Luka Doncic's Olympic career is off to a tremendous start.

In his first game for Slovenia at the Summer Games, the 22-year-old Dallas Mavericks phenom scored 31 points — just in the first half.

To put that in context, Doncic scored more in a half than any player in last night's marquee matchup between France and the United States.

Doncic's Slovenia led Argentina 62-42 going into the half.

Doncic's heroics should come as no surprise after the stellar season he put together in the NBA last year. In just his third season, he was named to the All-NBA first team and leapfrogged Michael Jordan on the all-time triple-double list.

At just 13 years old, she is now one of the youngest gold medal winners in Olympic history.

She is just months older than the current female record-holder, American diver Marjorie Gestring, who was 13 years and 267 days old when she won gold at the Berlin Games in 1936.