At just 13 years old, she is now one of the youngest gold medal winners in Olympic history.

She is just months older than the current female record-holder, American diver Marjorie Gestring, who was 13 years and 267 days old when she won gold at the Berlin Games in 1936.

The United States has won the gold medal in the men’s 4x100m freestyle relay at the Tokyo Olympics with a winning time of 3:08.97.

It’s the fifth gold medal for the US at the Games and 12th medal overall.

The number of Covid-19 cases linked to the Tokyo 2020 Olympic Games has risen to 153, up 16 from the previous day, according to Games organizers.

One of the new cases reported was a resident of the Olympic Village, bringing the total number of infections from the village to 16.

Three of the new cases were identified as athletes but were not residents of the village. The remaining cases are identified as contractors, media, or Games-concerned personnel.

Tokyo 2020 is not revealing the names or nationalities of the Covid-19 cases.

Dutch cyclist Annemiek van Vleuten threw her arms up in the air, her face a picture of ecstasy and joy.

That's what you do when you think you've won Olympic gold — except she hadn't.

That honor went to Austria's Anna Kiesenhofer, who capitalized on her rival's confusion in the Tokyo 2020 Olympic women's road race on Sunday to secure a shock win.

"When I crossed the line, I thought I had won," said silver medalist Van Vleuten.

Here's what happened: Kiesenhofer gave the performance of a lifetime to eclipse a field of big names and win the race, finishing in just under four hours.

The 30-year-old Austrian broke away from the leading group more than 40 kilometers from the end, holding her own on a demanding 147-kilometer course in the intense heat to win Austria's first cycling gold medal since 1896.

Kiesenhofer spent much of the rest of the race so far ahead of the chasing pack that she was out of sight of the other cyclists. 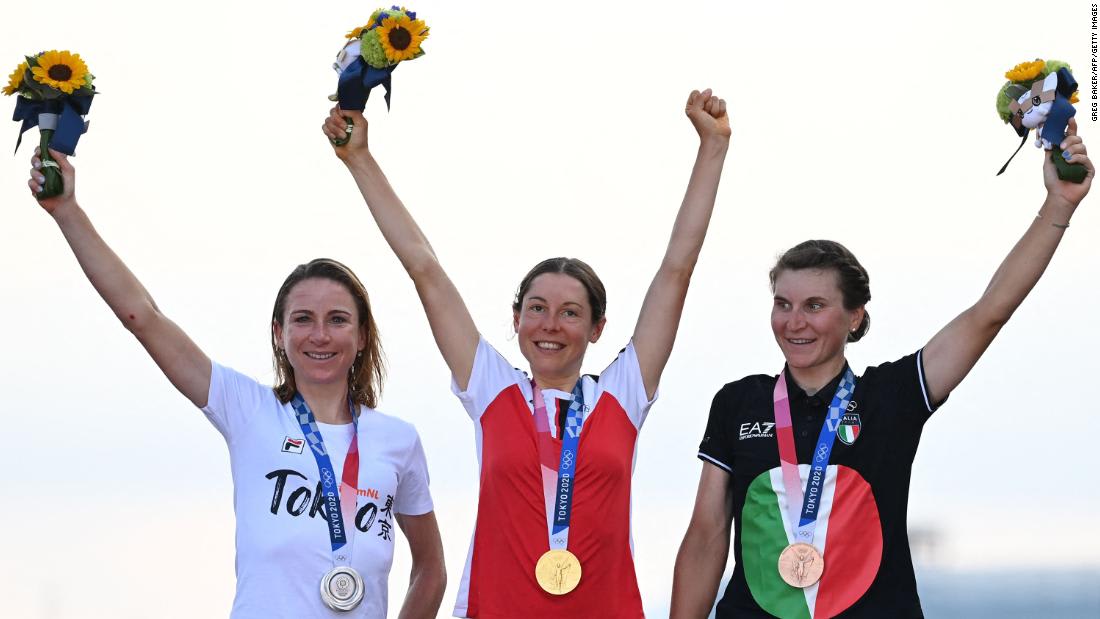 France beat the US men's basketball team 83-76 at the Tokyo Olympics on Sunday, ending Team USA's 25-game Olympic winning streak that dates back to 2004.

Team USA had an eight-point lead with four minutes left in the game, but the French team mounted a 16-2 run, highlighted by leading scorer Evan Fournier's go-ahead 3-pointer with less than a minute left to seal the win. It was the opening game for both teams.

The loss is Team USA's first since the team lost to Argentina in the 2004 Summer Games in Athens.

US head coach Gregg Popovich said he was "disappointed" in the loss, but not necessarily surprised.

"When you lose a game, you're not surprised, you're disappointed. I don't understand the word surprise. That sort of disses the French team, so to speak, as if we were supposed to beat them by 30 or something," Popovich said. 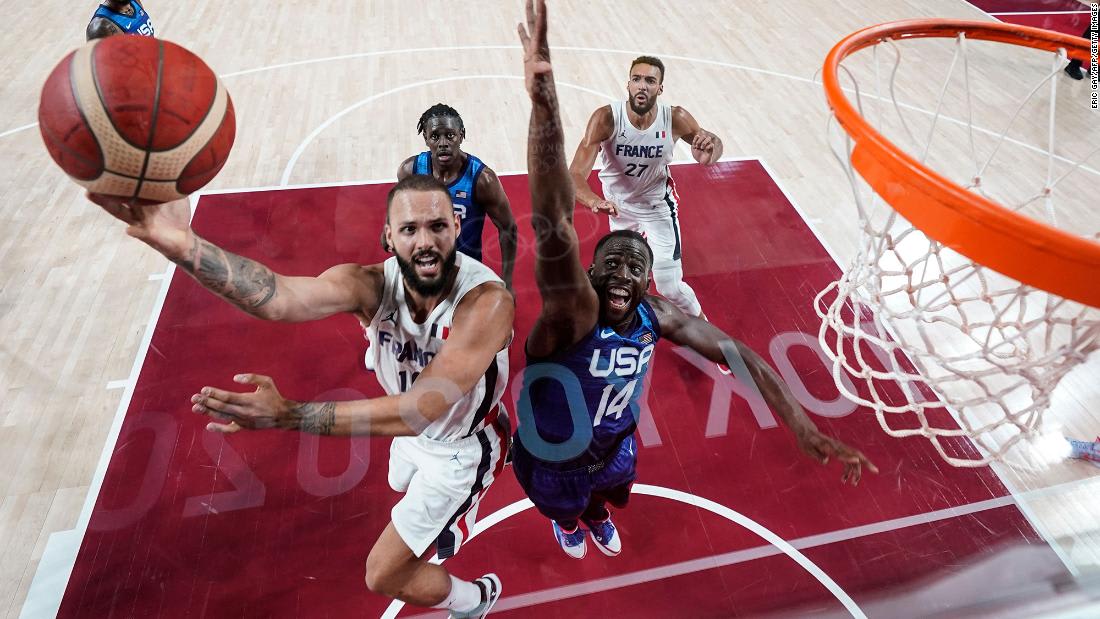 The Tokyo Olympics opening ceremony was a gratuitously enjoyable affair, with bulging muscles and beaming athletes proudly walking the Parade of Nations — and into our hearts.

The made-for-TV spectacle was an entry way for some viewers to learn more about countries and athletes that they are less familiar with. But in trying to bridge that knowledge gap, one South Korean broadcaster failed spectacularly, drawing from a bank of offensive stereotypes to depict several countries.

When Haiti's athletes walked onto the stadium, a caption posted on screen by South Korea's MBC network read: "The political situation is fogged by the assassination of the president."

When Syrian athletes entered, MBC aired a caption that said: "Rich underground resources; a civil war that has been going on for 10 years."

Another MBC caption described the Marshall Islands as "once a nuclear test site for the US." And when Ukraine's athletes entered the parade, MBC showed an image of the Chernobyl disaster — the world's worst nuclear accident.

When Italy walked on, the broadcaster pulled up an image of a pizza. For Norway, a salmon fillet was shown. An image of Dracula was used for Team Romania. And for Team El Salvador, a country where Bitcoin is legal tender, a picture representing the cryptocurrency was shown.

The broadcaster's gaffe led to a deluge of online criticism, with one South Korean Twitter user writing: "MBC wow, how would it be if South Korea was introduced as the country of Sewol ferry disaster?"

On Saturday, MBC issued a formal apology to the "countries concerned and our viewers."
"The images and captions are intended to make it easier for the viewers to understand the entering countries quickly during the opening ceremony," the statement said.
"However we admit that there was a lack of consideration for the countries concerned and inspection was not thorough enough. It is an inexcusable mistake."

The broadcaster also promised a full review of its editorial process, vowing no more Olympic blunders. 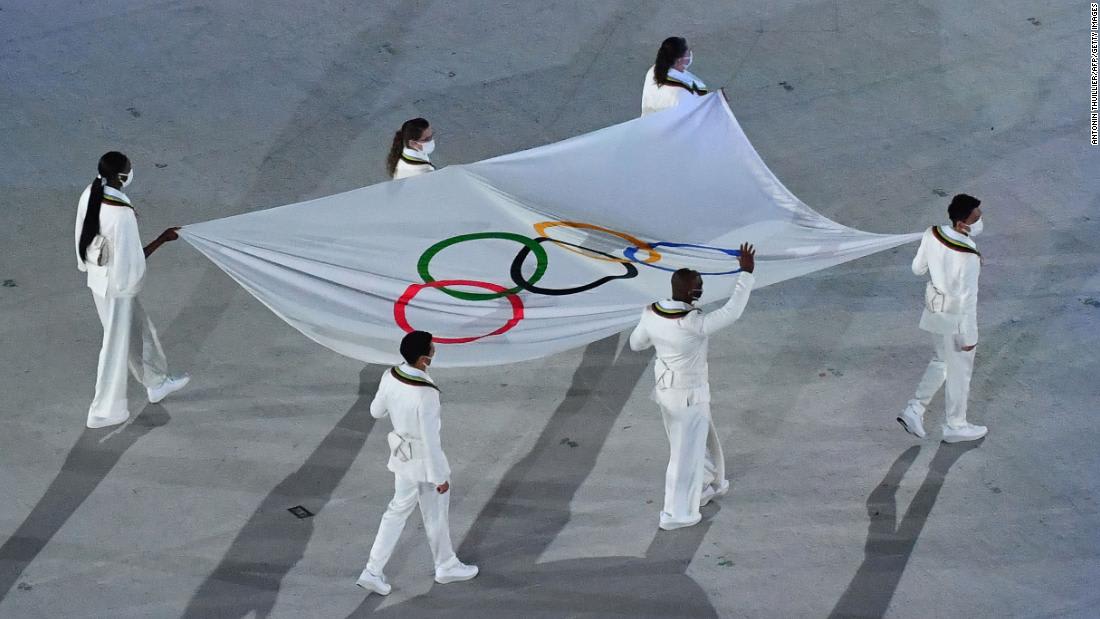 Pizza for Italy and Dracula for Romania. South Korean broadcaster apologizes for its Olympic 'inexcusable mistake'

Tokyo reported 1,763 new Covid-19 cases Sunday, the second official day of competition for the Olympic Games, according to the Tokyo Metropolitan Government.