The International Olympic Committee (IOC) says it hopes it is supporting athletes on issues surrounding mental health but "we can do more," spokesman Mark Adams said.

"It’s an incredibly important issue, and one that’s finally come to the fore. Are we doing enough? I hope so, I think so. But like everyone in the world, we can do more on this issue, and we are, and we’re really supporting the athletes in this," Adams said in a news conference the day after US gymnast Simone Biles withdrew from the team competition due to mental health concerns.

"We all have huge respect for [Biles,] and huge support for her," Adams added, saying that mental health has "been a big issue for quite a few years now, and it’s really coming to the fore."

Biles has qualified for the individual all-around competition Thursday, as well as the individual event finals in floor exercise, balance beam, vault and uneven bars next week.

Simone Biles' withdrawal from the women's team gymnastics final on Tuesday because of mental health concerns "broke my heart," said former US Olympic swimmer Michael Phelps, who has been an advocate for better mental health.

The conversation has taken prime spot at the Olympics after Biles pulled out, which followed tennis star Naomi Osaka's comments on the pressure of the Games impacting athletes' mental health.

"The Olympics is overwhelming," Phelps said. "There's a lot of emotions that go into it."

Phelps echoed earlier remarks from Biles, saying athletes carry "a lot of weight on our shoulders, and it's challenging, especially when we have the lights on us and all of these expectations that are being thrown on top of us."

In addition, the pandemic situation in Japan led to a decision where athletes weren't allowed to bring any family or supporters with them. Many athletes have spoken about the challenge that presents. Australia and WNBA player Liz Cambage, for example, withdrew before the Games began citing mental health reasons, as she was worried about a "bubble" Olympics.

"No family. No friends. No fans. No support system outside of my team. It's honestly terrifying for me. The past month I've been having panic attacks, not sleeping and not eating," Cambage had said about her decision.

Olympic athletes "need someone who we can trust," Phelps said, adding it has to be "somebody that can let us be ourselves and listen, allow us to become vulnerable, somebody who is not going to try and fix us."

"We're human beings. Nobody is perfect. So yes, it is OK to not be OK. It's OK to go through ups and downs and emotional rollercoasters. But I think the biggest thing is we all need to ask for help sometimes too when we go through those times."

Phelps said he hopes this is an opportunity to make the mental health conversation even bigger.

"This is something that's going to take a lot of time, a lot of hard work, and people that are willing to help."

The International Olympic Committee (IOC) hopes it is supporting athletes on issues surrounding mental health but "we can do more on this issue," spokesman Mark Adams said, adding that the committee has a lot of respect and support for Biles.

It's another busy day in Tokyo, but the tremors from Tuesday's surprises at the Olympics are still resonating. Here's what you need to know.

Mental health takes center stage: Simone Biles and Naomi Osaka are changing the conversation at the Olympics. Both athletes didn't perform to their usual standards on Tuesday. Neither has been afraid to open up about their mental health — an often taboo subject in the high-pressure world of competitive sports.

Here's what Osaka said after her surprising defeat in the women's singles tennis third round:

"I feel like my attitude wasn't that great because I don't really know how to cope with that pressure so that's the best that I could have done in this situation."

And this is what Biles told the media after the US placed second in the women's team gymnastics final:

"Whenever you get in a high stress situation, you kind of freak out," she said. "I have to focus on my mental health and not jeopardize my health and well-being."

Biles is 24; Osaka just 23. At such young ages, each has a tremendous weight on their shoulders.

But both seem unafraid to let the world know that mental health is health — it's just that unlike a bone, you can't see when it's broken.

Another gripping morning of swimming: Ariarne Titmus took care of business in the 200m freestyle, setting an Olympic record to win her second gold of the Games, while US star Katie Ledecky crushed the field to win gold in the first-ever women's 1500m freestyle.

Japan's stellar performance: As the sun rose over Tokyo on the fifth official day of the Olympics, hosts Japan remained atop the medal table.

With 11 gold medals, Japan currently still holds a narrow lead over the United States and China.

While it may be early days and even unlikely that lead will hold, Japanese athletes have put on an impressive display so far.

That success may just be translating into Olympics excitement. Polls have consistently shown that the Games have been overwhelmingly unpopular among the Japanese public amid health and safety concerns, but the mood appears to be shifting.

The number of Covid-19 cases linked to the Tokyo 2020 Olympic Games has risen to 174, according to Tokyo 2020 organizers on Wednesday.

No new cases were reported from the Olympic Village.

The new cases were mostly identified as contractors, Games-related personnel and two members of the media.

None of the new cases reported Wednesday were identified as athletes.

It was another exciting morning of competition at the Tokyo Aquatics Centre. Stars Katie Ledecky and Ariarne Titmus both won gold.

Ohashi became the first Japanese woman to ever win two gold medals in a single Olympics after winning the top prize in Sunday's 400m individual medley.

Japan holds top spot in the medal count with 11 golds, followed by the US and China with 10 each.

Her main rival, Katie Ledecky, surprisingly failed to medal in the event, finishing in fifth. But she had more in store for later.

Ledecky was the favorite to win the event and she didn't disappoint.

The US swimming star clocked a time of 15:37.34, leading the field for most of the race and finishing more than four seconds ahead of silver medalist, fellow American Erica Sullivan.

This is Ledecky's sixth Olympic gold medal and her eighth Olympic medal in total.

Attending each Olympic event in Tokyo starts with the same ritual.

Press the clever foot pedal to release a mist of hand sanitizer; get your temperature checked; scan your credentials and have your belongings scanned at security.

If your temperature is too high, you’re escorted to a pleasant tent to cool down from the Tokyo summer heat for five minutes — and then you can try again.

Despite the Games being almost completely devoid of crowds, there’s still a rigid process in place for those in attendance, with plenty of rules to follow. Once you’re actually in the venue, there’s usually a maze of barricades to guide you to the press seating area — so no, you cannot sit wherever you want, it’s all assigned despite thousands of other seats sitting empty.

But every Olympic venue offers a slightly different experience — the larger stadiums where you might catch rugby sevens or football are haunted by their emptiness, while the smaller venues, like for gymnastics, provide an intimate show of Olympic greatness.

The bottom line: There is no bad seat in the house.

After a 13-year hiatus, baseball is returning to the Olympics — although no fans will be there to witness it.

Japan goes head-to-head with the Dominican Republic on Wednesday in Fukushima.

Unlike Tokyo, Fukushima prefecture is not currently under a coronavirus state of emergency, but a decision was still made to host the seven games at the Fukushima Azuma Baseball Stadium — six softball and one baseball — without fans present.

That's despite spectators being allowed to attend other sporting events outside the Olympics in the region.

It's particularly disappointing for the city of Fukushima, where the Olympics was supposed to celebrate the region's recovery from a nuclear disaster more than a decade ago.

"We have genuinely dreamed of people all over the world coming to visit Fukushima, and we expected them to find out the attractiveness of Fukushima," Akinori Iwamura, a former Major League Baseball player and manager of semi-pro baseball side the Red Hopes Fukushima, told CNN.
"Although our towns haven't fully recovered, we wanted to tell everyone how Fukushima has been rebuilt in the last 10 years. It is pretty unfortunate to have no spectators at the games," added Iwamura.

Over in Koriyama city — about an hour drive from Fukushima city — residents said they felt elated by Japan's victory over the US in women's softball on Tuesday.

And while fans can’t be in the stands for Wednesday' game, some, like local resident Yuko Aikawa, said they were looking forward to watching on TV.

"Of course, I would've wanted to buy tickets to see the competition at the stadium, but I understand the decision to ban spectators," Aikawa said. "My friends and I have been following all the events on TV."

Simone Biles came to the Tokyo Olympics looking to earn another gold medal or four and deliver yet another stellar performance before potentially retiring. But then she did something her fans had never seen before: She faltered.

She was attempting an advanced vault move known as the Amanar, which she'd executed perfectly in a previous competition. The move involves a back handspring with two-and-a-half twists in the air before landing. It's a feat for the average Olympian, but when Biles nails it, she looks effortless.

On Tuesday, though, Biles "looked like she got lost" somewhere in the air, CNN sports analyst Christine Brennan said. She nearly landed on her knees and left the field of play close to tears. Minutes later, word came that Biles would not compete with the team.

Her departure stunned the sports world and her many fans in the US who've seen her repeatedly make the most difficult moves in gymnastics look like standard playground stunts. Biles' talent and charisma has catapulted her to a pedestal so high and seemingly untouchable that any mistake is magnified, and it's all the more devastating — to Biles and to her many fans — when she falls.

Biles isn't one to hide how she feels. After her less-than-perfect performance in the preliminary round Sunday, she said she feels like she has "the weight of the world on [her] shoulders at times."

"I know I brush it off and make it seem like pressure doesn't affect me but damn sometimes it's hard hahaha!" she wrote on Instagram.

Biles, the most decorated American gymnast, defies gravity like a superhuman, but even our near-perfect heroes are fallible. Seeing her slip reminds her many fans of what pressure, however well-intentioned, can do to an international idol. 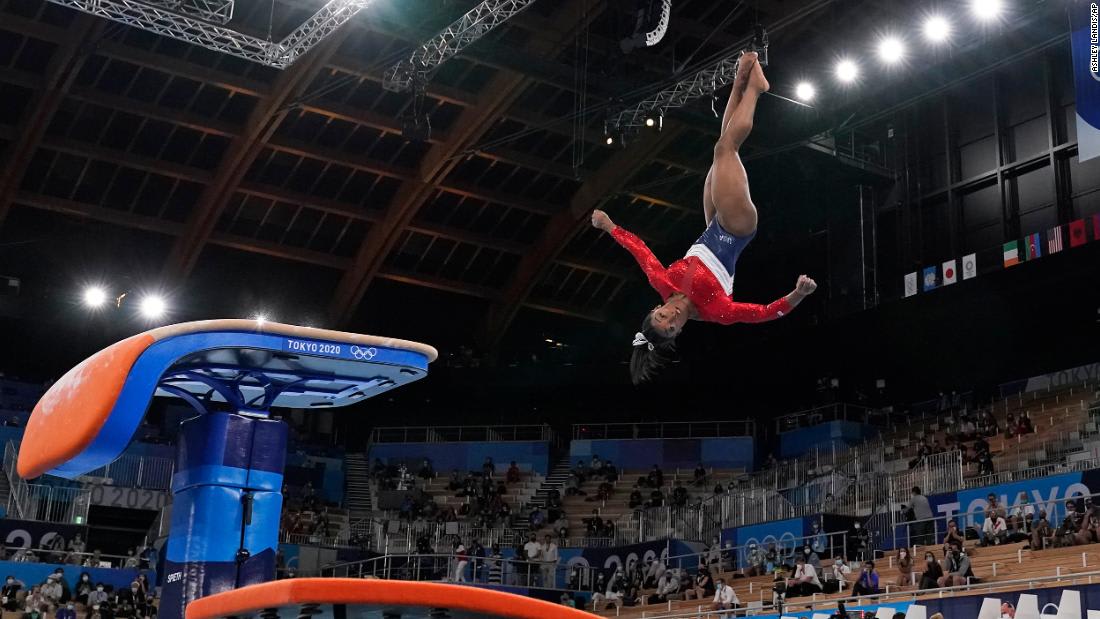