Tokyo is experiencing a hot and humid first week of the Olympics, but the high temperatures are not unusual for Japan's capital in mid-summer.

Compounding the heat is the usual high humidity. Humidity values have ranged from 66% to 84%, making it feel much hotter, and limiting the body’s ability to cool down through sweat and evaporation.

Though Tokyo is not officially in a heat wave, the hot weather is having an impact on Olympic athletes, particularly in the tennis. Organizers said Wednesday they are pushing back matches so they will begin later in the day.

It came after Spain’s Paula Badosa was forced to retire from her women’s singles quarterfinal match and left the court in a wheelchair due to heatstroke on Wednesday. Meanwhile, Russian Olympic Committee player Daniil Medvedev told the chair umpire that he could finish his men’s singles third-round match — but wanted to know whether the International Tennis Federation would take responsibility if he died.

What athletes can expect in the next week: The forecast in Tokyo is for more of the same — temperatures will continue to be in the low 30s in degrees Celsius (86 to 92 F) over the next seven days, potentially reaching 33 to 34 degrees Celsius (92 to 93 F) over the weekend. There are not currently any heat advisories in effect for the Greater Tokyo region, according to the Japan Meteorological Agency.

American swimmer Robert Finke won gold in the men's 800-meter freestyle event on Thursday morning in Japan with a time of 7:41.87.

This is the first time the event has been held at the Olympics.

Finke, who goes by Bobby, beat Italy's Gregorio Paltrinieri, who took silver with a time of 7:42.11. Ukraine's Mykhailo Romanchuk won bronze in 7:42.33.

The triumph gives Italy its second gold medal and 17th total medal at the Tokyo Games.

Ireland's Fintan McCarthy and Paul O'Donovan have won the country's first ever Olympic gold medal in rowing during the men's lightweight double sculls event, finishing with a time of 6:06.43.

It's Ireland's first gold medal of the 2020 Tokyo Olympics and second medal overall of this Games.

Prior to the Tokyo 2020 Games, Ireland had won nine Olympic gold medals, all in individual events in athletics, boxing and swimming.

Congratulatory tweets have already started to roll in for the Irish team, including this one from Skibbereen Rowing:

New Zealand won its first gold medal of the Tokyo 2020 Olympics with victory in the women’s pair rowing.

Duo Grace Prendergast and Kerri Gowler took gold with a time of 6:50.19 on Thursday morning in Japan. It's also New Zealand’s first ever Olympic gold medal in the event.

American former skating star Apolo Ohno has lent his support to gymnast Simone Biles, saying the world should support athletes "when they need it most."

Biles decided to bow out of the women's individual all-around competition to focus on herself, prompting waves of support from fellow Olympians like eight-time medalist Ohno.

"The mind is the greatest asset or sometimes it's the world's strongest prison. At first glance, you see someone who is the ultimate performer when we often like to portray them as invincible and all of the ideas we want to see from a superhero figure," Ohno told CNN tonight.
"When we forget they're human we forget they have bad days and we always support athletes when they win and they are champions. When we see them on the stage, we always wish we can or they would like to be. We should also support them when they need it most."

The brothers had won two medals each at the past two Olympic Games heading into Tokyo 2020.

The twisties are a mysterious phenomenon, where suddenly a gymnast is no longer able to do a twisting skill she's done thousands of times before.

Your body just won't cooperate, your brain loses track of where you are in the air. You find out where the ground is when you slam into it.

This is what Simone Biles said she experienced in morning practice.

When Biles scratched most of the Olympic team final, she said it was not because of a physical injury, but her mental health. This doesn't mean she felt sad, or didn't have her heart in it to compete. It means that her psychological state put her at significant physical risk. If her brain wouldn't play along with what her body knows how to do, she could be seriously injured.

Flipping and twisting at the same time can be extremely disorienting, you can't just watch where you are with your eyes. You have to feel it. This is proprioception, a sense of where your body is in space and what it's doing.

In gymnastics, this is called "air sense." And Biles is famous for how good hers is.

"She's always had incredible air sense, which is what you need in this sport," her former coach Aimee Boorman told Houstonia magazine in 2015. "She doesn't crash very frequently. Other kids, you'll just see them splat, or get lost in the air. That doesn't happen with her."

Her natural talent is why her missed vault is so stunning. But her decision to scratch makes a lot of sense. When the twisties set in, it's hard to know when they'll go away. But Biles' decision to protect herself marks a shift from the old way gymnastics worked in the US.

"We also have to focus on ourselves, because at the end of the day we're human, too," she said. "So, we have to protect our mind and our body, rather than just go out there and do what the world wants us to do." 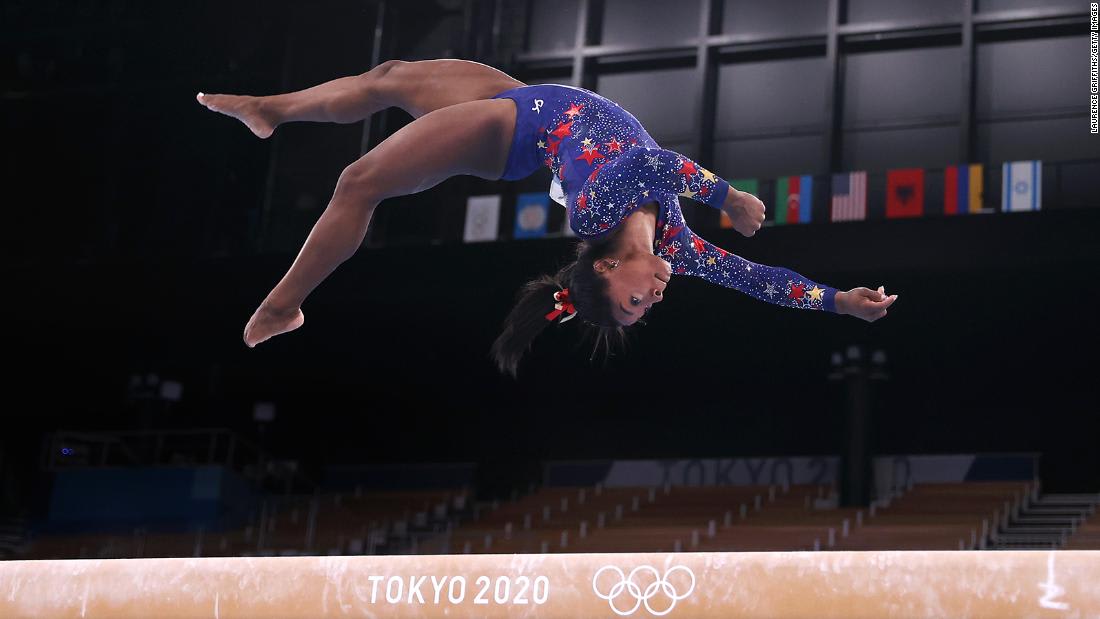 Simone Biles and 'the twisties': How fear affects the mental health and physical safety of gymnasts

Dominique Moceanu, a member of the 1996 Olympic gold medal gymnastics team, commended Simone Biles' decision to bow out of the women's individual all-around competition to focus on herself.

"I was 14 y/o w/ a tibial stress fracture, left alone w/ no cervical spine exam after this fall. I competed in the Olympic floor final minutes later. @Simone_Biles decision demonstrates that we have a say in our own health—'a say' I NEVER felt I had as an Olympian," Moceanu tweeted along with a video of her Olympic performance.

She went on to say, "In our sport, we essentially dive into a pool w/ no water. When you lose your ability to find the ground—which appears to be part of @Simone_Biles decision— the consequences can be catastrophic. She made the right decision for the team & herself."