Serbian tennis star Novak Djokovic moved into the Olympic quarterfinals on Wednesday to maintain his quest for a ‘Golden Slam.’

The ‘Golden Slam’ comprises winning all four grand slams — plus the Olympic singles gold — in one calendar year.

Djokovic has already claimed the Australian Open, French Open and Wimbledon titles this year. He will need to win the US Open in September to complete the grand slam.

An Olympic gold would make the 34-year-old the first ever male player to seal the ‘Golden Slam.’

Germany's Steffi Graf is the only player to have achieved this landmark, completing the feat in 1988.

Djokovic will meet Japan’s Kei Nishikori in the quarterfinals.

The 31-year-old was forced out of the recent Tour de France due to a series of crashes in the first week, but his Tokyo gold completes a stunning comeback.

The Netherlands’ Tom Dumoulin secured silver — the same result he achieved five years ago in Rio.

Australia’s Rohan Dennis completed the podium as he secured bronze.

The city of Fukushima hoped to celebrate its recovery from a decade-old nuclear disaster with the return of baseball to the Olympics. But with the current pandemic situation, authorities decided to hold seven games — six softball and one baseball — at the Fukushima Azuma Baseball Stadium without spectators, handing a disappointment to the city.

That's despite fans being allowed to attend other sporting events outside the Olympics in the region.

"We have genuinely dreamed of people all over the world coming to visit Fukushima, and we expected them to find out the attractiveness of Fukushima," Akinori Iwamura, a former Major League Baseball player and now manager of semi-pro baseball side, the Fukushima Red Hopes, tells CNN. "Although we have not recovered our towns fully, we wanted to tell everyone how Fukushima has been rebuilt in the last ten years. It is pretty unfortunate to have no spectators at the games."

Baseball is returning to the Olympics after a 13-year hiatus, and enjoys considerable popularity in Japan.

The United States men’s basketball team put the shock loss to France behind them with a thumping 120-66 victory over Iran on Wednesday.

Damian Lillard finished with a game high 21 points, including six threes in the first half.

Team USA next faces the Czech Republic in the team’s final group game on Saturday.

Tokyo has reported a record day of new Covid-19 cases for the second consecutive day amid the Olympic Games, according to Tokyo Metropolitan Government.

At least 174 Covid-19 cases have been reported as linked to the Tokyo 2020 Games as of Wednesday, according to Tokyo 2020 organizers.

The Japanese capital is currently under a state of emergency in effect until August 22.

Annemiek Van Vleuten grabbed the headlines on Sunday, but not for the reasons she would have wanted.

The Dutch cyclist thought she had taken gold in the women's road race, not realising Austria's Anna Kiesenhofer had already finished well ahead of her.

Van Vleuten bounced back from that disappointment in perfect fashion on Wednesday, demolishing the field to take gold in the time trial.

“This has nothing to do with Sunday," she replied when asked if this gold medal made up for what had happened at the weekend.

"I closed myself from social media and the message I took home from the road race was that I was in my best possible shape.

“I let everyone in the media [talk]… I left the Twitter account closed. I let everyone talk but the message I took from it said: 'I nailed it again to be in my best possible shape ever.'”

And for any amateur cyclists out there who still have fears about getting on the bike, you can take solace in the fact that even the Olympic silver medalist shares those same concerns.

“I’m afraid of some turns and downhill stretches," Reusser said after the time trial.

A version of this story appeared in CNN's Meanwhile in China newsletter, a three-times-a-week update exploring what you need to know about the country's rise and how it impacts the world. Sign up here.

A gold medal-winning Canadian swimmer has made waves in China for her Chinese heritage, sparking heated discussions over the country's decades-long one-child policy and gender discrimination.

In China, however, the 21-year-old was drawing wide attention for another reason, as news spread that the Canadian girl who beat China's top woman swimmer, Zhang Yufei, by 0.05 seconds was actually born in China and adopted as a baby by a Canadian couple.

The subject of MacNeil soon lit up Chinese social media. A hashtag about her victory became the top trending topic on Chinese microblogging site Weibo on Monday morning, and has since drawn nearly 400 million views.

Much of the attention has focused on her Chinese heritage — and reflections over the wider social and political circumstances that led to her adoption by a foreign family. 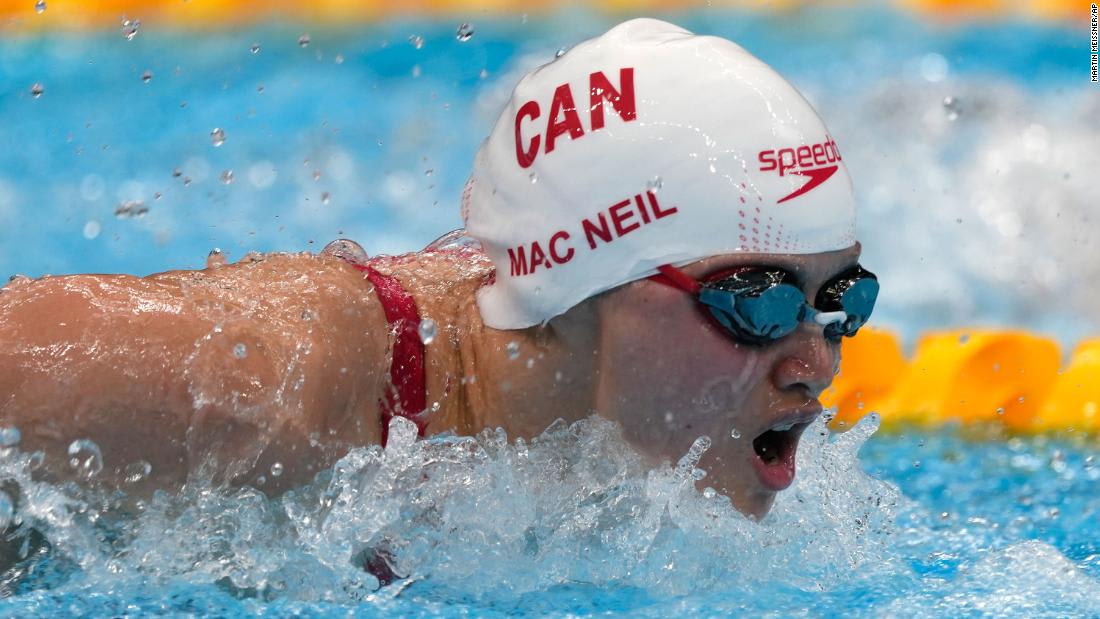 Five-time Olympic gold medalist Nadia Comaneci says she can relate to the high pressure of the Olympics that Simone Biles spoke about upon withdrawing from the team finals event.

"I think that the more medals you have when you go back, the heavier the backpack is," she told CNN.

Comaneci says it was easier the first time she competed

But four years later, she went back as the Olympic champion and it was a different story.

"You kind of have to be prepared that you are going to be hit from all directions on everything that you do," the Romanian former gymnast said.
"That is a lot of pressure because you want to do your best. But I think it's important to remind yourself that you want to do the best that you can for yourself. And not the best for everyone else [who] expects you to do something that it's more than you can deliver. So, you have to be sure that you keep those pieces separate," she added.

Biles' decision to withdraw from the team was "the right thing" to do for herself and for the US team as well, two-time Olympic gold medalist Bart Conner said.

"It's scary when you are flying through the air and you have no idea where you are," he added.

Referring to Biles speaking out as a survivor of abuse by former US team doctor Larry Nassar, Comaneci said, "it's really hard to be everywhere and to do everything."

"Everything that she does is so unbelievably difficult. Then to be able to juggle five other things during the day, it's really complicated and it's a lot of pressure," she said.
"I think that she will just be continually a role model for all the generations thinking of doing gymnastics right now," Comaneci added.

It's roasting on center court at the Ariake Tennis Park.

World No.2 Daniil Medvedev was clearly affected by the weather. Midway through the match, the Russian — known for his dry humor and sarcasm — approached the chair umpire to ask what would happen if he died.

"I'm a fighter, I will finish the match, but I can die," he said. "If I die, is the ITF (International Tennis Federation) going to take responsible (sic)?

Medvedev eventually beat Fabio Fognini of Italy 6-2, 3-6, 6-2 to advance to the quarterfinals. He told reporters after the match that during the second set, it was so hot he had "darkness in his eyes."

"Between every point I didn’t know what to do to feel better. I was bending over, and I couldn’t get my breathing together. I was ready to just fall down on the court," he said.

When temperatures are high, the ITF can activate its Extreme Weather Policy, giving players extra options to help cool down.

Medvedev isn't the only one with concerns. World No.1 Novak Djokovic said the conditions for his first match on Saturday were "brutal."

The Serbian superstar is set to take on Spain's Alejandro Davidovich Fokina in the third round today, and then play a doubles match later in the day, despite the heat.