Be it a fierce connection or age-old rivalry, siblings will be showing up in big numbers at the Tokyo 2020 Olympics, with nearly 30 sets of siblings competing.

Meanwhile, Team USA has seven pairs of siblings and Team Great Britain has nine pairs, who are competing across sports.

British twin sisters Jennifer and Jessica Gadirova have already scored a bronze at the women's gymnastics team final. They are also in competition against twin sisters from Italy and the Netherlands. Meanwhile, a pair of Russian twins will compete in rhythmic gymnastics.

Croatia has another set of brother competing in sailing, along with a pair of Turkish siblings.

Spain's men's basketball team has a pair of brothers -- Pau and Marc Gasol have three NBA titles between them -- and the triathlon will see a Kiwi brother and sister compete in their respective events as well.

How is this happening?

Well, nobody knows for sure. But many of these athletes have spoken about their journey in the sport and a lot of them have described their sibling's influence in getting them started. Some of them were also trained by their athlete parents. Maybe nobody wants to miss out on the primary kitchen table discussions.

Increasing Covid-19 cases in Tokyo raise the risk of transmission for those inside the Olympic bubble, a public health expert in the Japanese capital said.

Tokyo on Wednesday reported more than 3,000 new infections in a single-day record.

"Obviously the more transmission outside, the more opportunity for those within the bubble will get infected, and vice versa, as it has already burst," Shibuya said.

Tokyo's health system is "being overwhelmed," he added.

A Tokyo Metropolitan Government official said the capital has a total of 392 beds for "serious Covid-19 patients," of which 80 are currently occupied.

Japanese media is reporting that three prefectures neighboring Tokyo — Chiba, Kanagawa and Saitama — will ask Japan's government to be added to areas under the Covid-19 state of emergency after a recent surge, citing Chiba Gov. Toshihito Kumagai.

At least 198 Covid-19 cases have been linked to the Games so far.

Meanwhile, the International Olympic Committee said it's confident the Games and its Covid-19 cases are not affecting hospital care for the population outside of the sporting event.

IOC spokesman Richard Budgett said in a press briefing the "highest priority" is that "we do not affect the normal provision of care to the general population."

After making history with his victory at the Open earlier this month, Collin Morikawa might well be the favorite to win Olympic gold in the country where half his family is from.

Morikawa, who is half Japanese, became the first man to win both the PGA Championship and the Open on his tournament debuts having won his maiden major last year.

And now he is in Japan for the 2020 Tokyo Olympics as part of a four-man Team USA delegation, looking to win the country's first ever Olympic gold medal in men's single golf.

After finishing in the top 15 of the Olympic Golf Ranking at the close of the qualification period, Morikawa joined Justin Thomas, Xander Schauffele and Bryson DeChambeau in receiving the honor of representing the US at the Summer Games.

Unfortunately for 2020 US Open winner DeChambeau, he has been forced to withdraw after testing positive for Covid-19. He has since been replaced by 2018 Masters winner Patrick Reed.

Just over two years ago, Morikawa was ranked 1,039th in the world having finished tied for 14th at the RBC Canadian Open in June 2019. Now, he is a two-time major winner heading to the Olympics.

And he says he's ready to soak everything up while in Japan.

"(His excitement) is through the roof to really think about where I was two years ago as an amateur and where I am now in the world, everything I've done so far," he told CNN Living Golf's Shane O'Donoghue.
"It's crazy to think that I have this opportunity, but it's something that I'm never going to take for granted. No one's going to be able to take it away from me and to be representing Team USA, it's one of the biggest honors really." 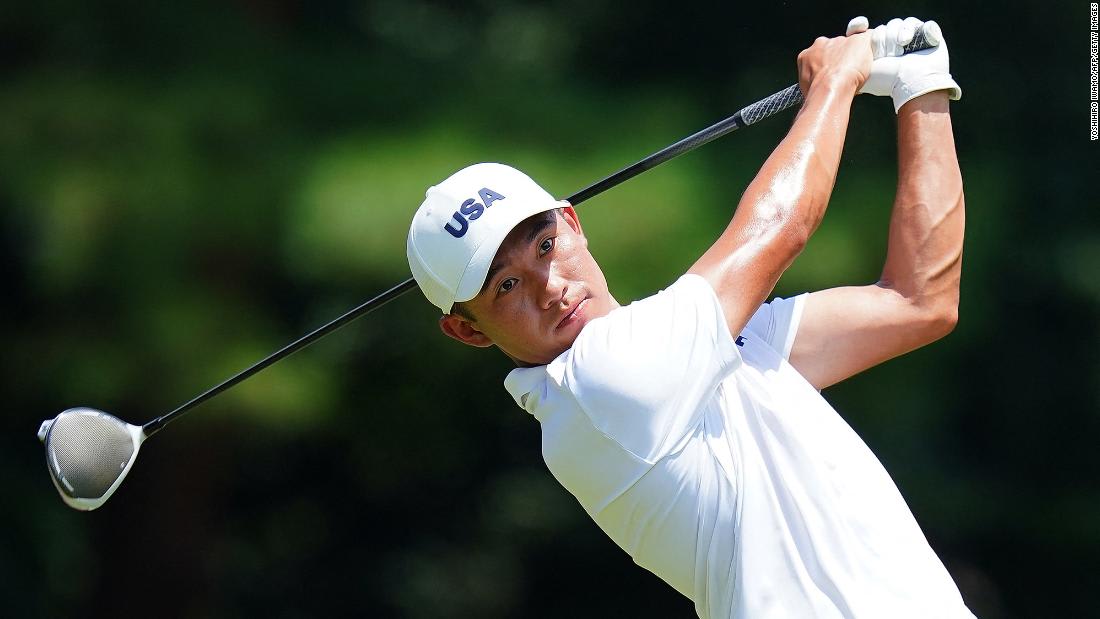 Anyone who has been to Japan can tell you it’s the vending machine capital of the world.

From food and drink to umbrellas and clothes, there’s a seemingly endless supply of options.

The Japanese Vending Machine Manufacturers Association estimates there are more than 5 million nationwide — or one for every 23 people.

So, it’s no surprise but still great fun to find the Olympic souvenir vending machines at the main press center. On offer are Olympic branded mugs, sunglasses, tote bags and traditional Daruma dolls that symbolize perseverance and luck.

They are such a hit that Japanese station Fuji TV are here filming people using them.

Australia's Olympic Committee (AOC) has said "members" of the country's Olympic track and field team are in isolation as a "precautionary measure" after a US athlete tested positive for Covid-19.

The AOC did not say how many members of the team were in isolation.

Athletics kicks off on Friday in Tokyo, with heats for the women's 100-meters, women's 800-meters and men's 400-meter hurdles, among other events.

The AOC said the isolation was a "precautionary measure" and did not say how long the team members would be isolating for — or whether they could potentially miss their events.

The AOC did not name the US athlete that tested positive, but earlier on Thursday American men’s pole vaulter Sam Kendricks was ruled out of the Games after a positive test result, the US Olympic and Paralympic Committee announced.

"Members of the Australian track and field team are now undergoing testing procedures in line with Australian Olympic Team protocols," the AOC added.

The sight of a jubilant Olympian standing atop the podium after being victorious in their discipline with a gold medal between their teeth is an iconic one.

We've seen it numerous times at the 2020 Tokyo Olympic Games already, across a host of disciplines.

The official Tokyo 2020 account even went as far on Sunday to try to remind people that the medals are not, in fact, edible.

"We just want to officially confirm that the #Tokyo2020 medals are not edible," it said.

"Our medals are made from material recycled from electronic devices donated by the Japanese public. So, you don't have to bite them ... but we know you still will."

But why do these victorious athletes decide to celebrate their coronation by pretending to take a bite out of their gold medals?

David Wallechinsky, Executive Committee Member of the International Society of Olympic Historians, told CNN in 2012 that it's probably an attempt to satisfy the media.

"It's become an obsession with the photographers," says Wallechinsky, co-author of "The Complete Book of the Olympics." "I think they look at it as an iconic shot, as something that you can probably sell. I don't think it's something the athletes would probably do on their own."

The phenomenon is not exclusive to the Olympics though.

Tennis superstar Rafael Nadal has become famous for looking like he wants to take a chunk out of the trophies he wins, in particular the Coupe des Mousquetaires — the French Open men's singles trophy — he's become so acquainted with. 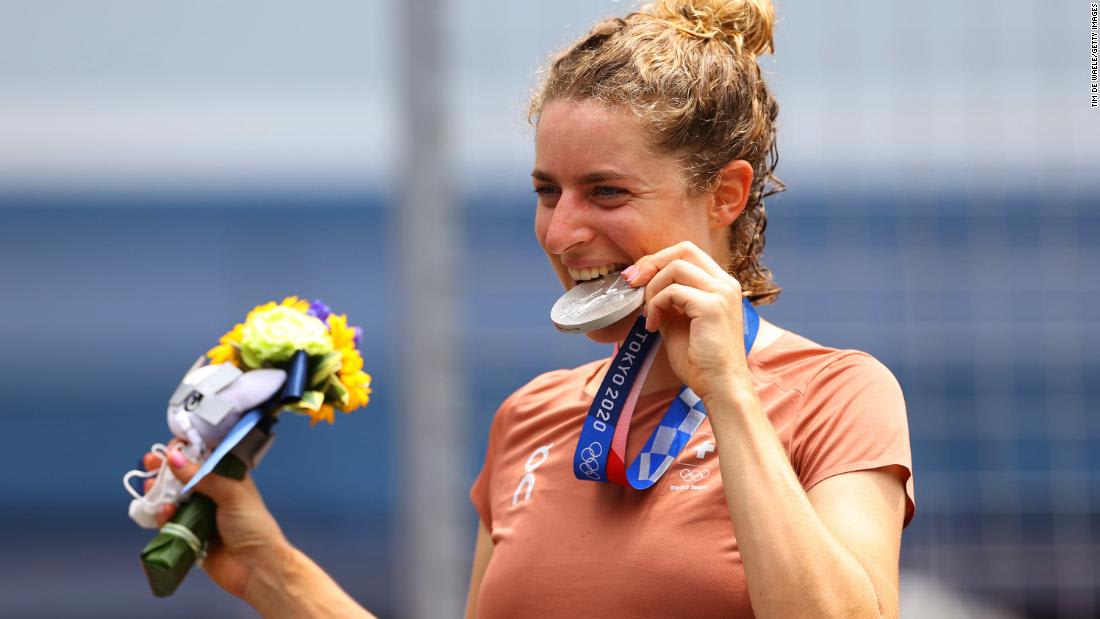 Why Olympians bite their medals and what they do with them

American swimmer Robert Finke, who goes by Bobby, says he "honestly did not expect to win at all," after he clinched gold in the men's 800-meter freestyle event on Thursday morning in Japan.

"Coming off the trials, I think I was like, 12th coming into the heat. So I was just trying to make it back to finals," he said.

But he realized he chance to win when he saw that he had done better than his best time.

"That's what really started it off for me, and I just tried to do my best to get my hand on the wall," he said Thursday.

Finke said he is happy to have won for the US team and for his supporters at home, but when he goes back, his lifestyle will not change.

"My lifestyle now is what got me here, so I don't see a need to change it. I'm just going to go relax with my family, celebrate with them, see all my friends and supporters back in Gainesville, and I'm just excited for the fall," he added.

Following his Olympic gold and Olympic record in the men's 100-meter freestyle, Team USA’s star swimmer Caeleb Dressel reflected on how hard things have been over the past year in an emotional interview.

“I don’t know if it’s set in yet. Right now, I’m just kinda hurting. But it’s been a really tough year. It’s really hard. So to have the results show up — it really came together. So I’m happy," Dressel said.

Dressel won his first individual Olympic gold medal in the event with a time of 47.02 seconds.

Dressel's remarks come with the spotlight firmly on athletes' mental health at the Tokyo Games. US gymnast Simone Biles has spoken this week of the difficulties athletes face after she withdrew from some team and individual events.

Some Chinese users who tried to call for an end to the online abuse were also attacked. Ito shut down her Weibo feed in the end.

On Wednesday, Mizutani said on Twitter that he had received a torrent of messages attacking him, without directly mentioning China.

“Got tons of DM from a country telling me to ‘Go to hell! P*ss off!’, but I’m totally ok as I’m used to such comments. I’m just happy that I got the whole word excited. All messages from Japanese are cheering me, thank you!” he wrote in the tweet, which was later deleted.

On Thursday, China’s Sun Yingsha beat Ito in the women’s singles semifinal, to the cheers of millions of Chinese fans online. The match was the top trending topic on Weibo throughout the morning, with several related hashtags attracting hundreds of millions of views.

China currently leads the overall medal table with 14 golds, with Japan in third — the hosts have claimed 13 golds so far. The United States is second.