Some Chinese users who tried to call for an end to the online abuse were also attacked. Ito shut down her Weibo feed in the end.

On Wednesday, Mizutani said on Twitter that he had received a torrent of messages attacking him, without directly mentioning China.

“Got tons of DM from a country telling me to ‘Go to hell! P*ss off!’, but I’m totally ok as I’m used to such comments. I’m just happy that I got the whole word excited. All messages from Japanese are cheering me, thank you!” he wrote in the tweet, which was later deleted.

On Thursday, China’s Sun Yingsha beat Ito in the women’s singles semifinal, to the cheers of millions of Chinese fans online. The match was the top trending topic on Weibo throughout the morning, with several related hashtags attracting hundreds of millions of views.

China currently leads the overall medal table with 14 golds, with Japan in third — the hosts have claimed 13 golds so far. The United States is second.

The Chinese team swam to victory in the women's 4x200-meter freestyle relay, breaking the world record with a time of 7:40.33.

Helping her team to gold was Zhang Yufei, who had just come from winning the women's 200-meter butterfly, setting an Olympic record.

The previous world record, set by Australia in 2019, was 7:41.50. All three teams swam faster than this today.

Expect another action-packed day in Tokyo on Thursday as Japan's capital hosts Day 6 of the 2020 Games.

Biles and "the twisties": Focus continues to be on US gymnast Simone Biles, who dropped out of the women's individual all-around competition to focus on her well-being. It's unclear if she'll compete in other events. Biles has been praised for her courage in putting her mental health first.

Conversation has now turned to "the twisties" and how fear affects the mental and physical health of gymnasts. When Biles pulled out, it meant her psychological state put her at significant physical risk.

"We have to protect our mind and our body, rather than just go out there and do what the world wants us to do," Biles said.

Heat takes its toll: It's forecast to be another sweltering day in the Japanese capital and athletes can expect similar heat and humidity for the next week. The hot weather is having an impact on Olympic athletes, particularly in the tennis. Organizers said Wednesday they are pushing back matches so they will begin later in the day.

It came after Spain’s Paula Badosa was forced to retire from her women’s singles quarterfinal match and left the court in a wheelchair due to heatstroke. And Russian Olympic Committee player Daniil Medvedev told the chair umpire that he could finish his men’s singles third-round match — but wanted to know whether the International Tennis Federation would take responsibility if he died.

Morning of firsts: Men's individual golf got the ball rolling on Day 6. In rowing, Fintan McCarthy and Paul O'Donovan won Ireland's first ever Olympic rowing gold in the men's lightweight double sculls event. And New Zealand won its first gold medal of Tokyo 2020 with victory in the women’s pair rowing. Meanwhile, USA's Bobby Finke took gold in the men's 800-meter freestyle event in the pool — his first Olympics and a first for this event at the Games.

More medals were won and Olympic records set at the Aquatics Centre on Thursday morning in Tokyo. Here's a rundown from Day 6:

The 2020 Summer Olympic Games are already historic, and not just because they're taking place a year later than scheduled. This year's Olympics feature, by one count, more participants who identify as LGBTQ than at any other Games.

At least 168 of the 11,000 Olympians competing in Tokyo this week are openly LGBTQ, according to the SB Nation blog Outsports.

Of the 160-plus LGBTQ athletes, some are well-known stars like FIFA Women's World Cup champ Megan Rapinoe, WNBA great Brittney Griner and diver (and newly minted gold medalist) Tom Daley, all of whom came out publicly in the last decade. They're joined by up-and-comers like the Canadian soccer player Quinn and New Zealand weightlifter Laurel Hubbard, both of whom are transgender.

The improvement in LGBTQ representation at the Olympics is cause for celebration, but it should also give athletes and audiences pause, said Erik Denison, a behavioral scientist at Monash University in Australia. By Outsports' count, less than 2% of all athletes competing in Tokyo identify as LGBTQ — and, according to Denison, that number is still low. In the US alone, an estimated 4.5% of people are LGBTQ, according to a 2020 count from the Williams Institute, UCLA Law's LGBTQ policy center.

"We've done an OK job," Denison, who studies inclusion in sports, told CNN. "But this has been a serious problem for a while ... we need to start asking some serious questions about what's going on here." 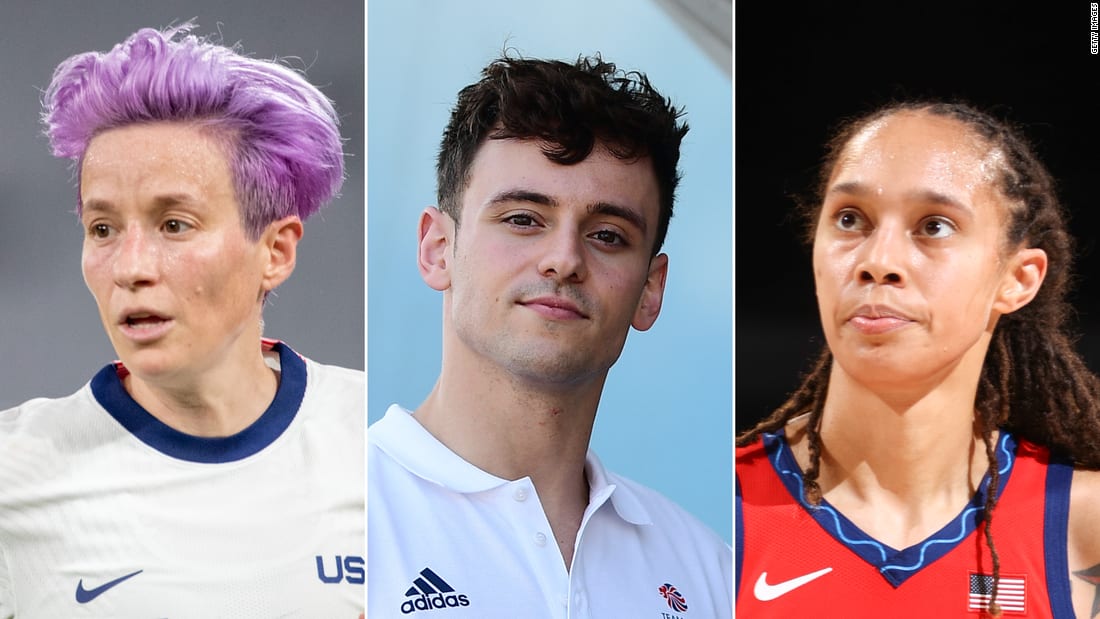 There may be more Olympians who identify as LGBTQ than ever before. But there are limits to inclusion

Tokyo is experiencing a hot and humid first week of the Olympics, but the high temperatures are not unusual for Japan's capital in mid-summer.

Compounding the heat is the usual high humidity. Humidity values have ranged from 66% to 84%, making it feel much hotter, and limiting the body’s ability to cool down through sweat and evaporation.

Though Tokyo is not officially in a heat wave, the hot weather is having an impact on Olympic athletes, particularly in the tennis. Organizers said Wednesday they are pushing back matches so they will begin later in the day.

It came after Spain’s Paula Badosa was forced to retire from her women’s singles quarterfinal match and left the court in a wheelchair due to heatstroke on Wednesday. Meanwhile, Russian Olympic Committee player Daniil Medvedev told the chair umpire that he could finish his men’s singles third-round match — but wanted to know whether the International Tennis Federation would take responsibility if he died.

What athletes can expect in the next week: The forecast in Tokyo is for more of the same — temperatures will continue to be in the low 30s in degrees Celsius (86 to 92 F) over the next seven days, potentially reaching 33 to 34 degrees Celsius (92 to 93 F) over the weekend. There are not currently any heat advisories in effect for the Greater Tokyo region, according to the Japan Meteorological Agency.

It was meant to be the biggest day of Paula Radcliffe's career. The whole planet was expecting the world record holder to win the 2004 Athens Olympic marathon — a dream she had since she was 11 years old.

And then it all went wrong. A combination of a leg injury and stomach illness meant Radcliffe was forced to pull out of the race a few miles before the finish line, disoriented and in visible distress.

She was no longer the medal hopeful. Instead, she was called a "quitter" and accused of letting her country down — just as Simone Biles has been this week after withdrawing from individual all-around competition at the Tokyo Olympics.

Biles, the most decorated gymnast in history, pulled out over mental health concerns and Radcliffe said that while their health issues were different, the underlying problem was the same.

"Neither one of us quit. Our bodies just weren't able to do it," Radcliffe told CNN in a phone interview. "Very few people actually understand the relationship between your mind and your body ... particularly in something that's really physically, or mentally — or both — taxing, you really need to know when to push through it and when to listen to your body, and it's what has made her the great champion that she is," she said.
"I would argue that she's actually even stronger mentally for being able to make that call now," Radcliffe said of Biles.

The British press hounded Radcliffe relentlessly in the aftermath of the Athens Olympics, scrutinizing her every move. Reporters were hiding in bushes to watch her train and tried to trick her doctor into disclosing her private medical records. It got so bad that she and her husband and coach Gary Lough eventually left the country and went to Arizona to focus on training.

For Biles and her generation of elite athletes, however, escaping is nearly impossible because of social media.

"It can be so cruel and so heartless and harmful and particularly in this current situation where the athletes are kind of in a bubble, removed from the real world ... then they start to think those comments are real and they hurt a lot more than if you were protected by all of your family and friends around you," Radcliffe said, referring to an Olympics held during the pandemic. 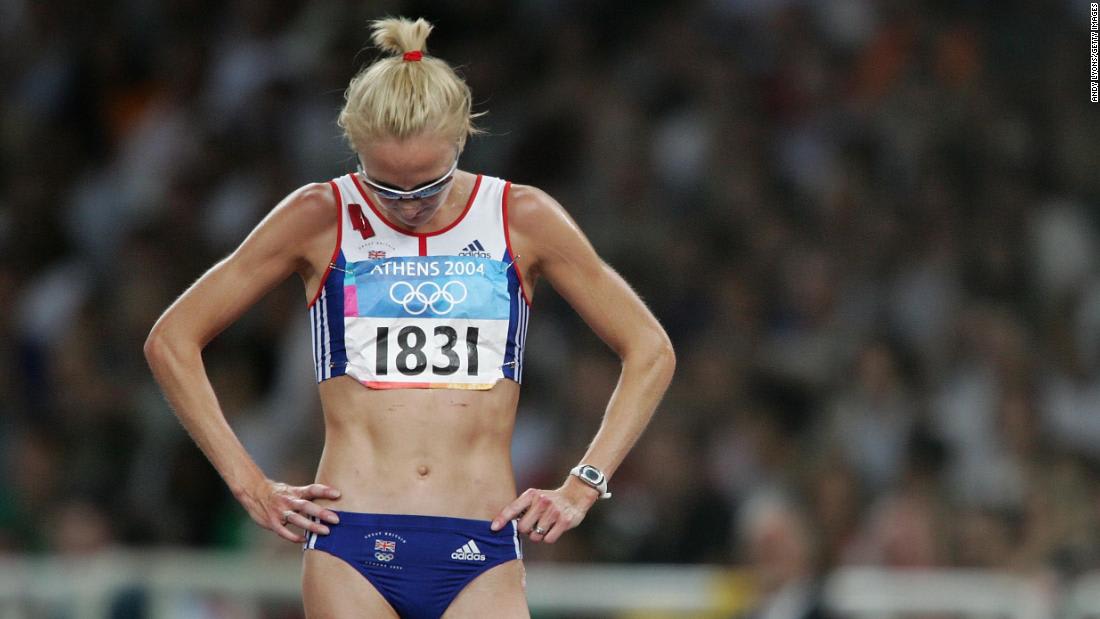 How I fought back against 'quitter' label: Long-distance running legend on Simone Biles

The 24-year-old champion cited mental health concerns as the reason for her earlier withdrawal from Tuesday's team competition during interviews with reporters in Tokyo. Biles may still compete in next week's individual event finals.

Athleta chief brand officer Kyle Andrew said the sports apparel company stands by Biles and supports her well being "both in and out of competition." Biles signed an endorsement contract with Athleta earlier this year after ending her contract with Nike.

"Being the best also means knowing how to take care of yourself," Andrew told CNN Business via email on Wednesday. "We are inspired by her leadership today and are behind her every step of the way."

On Tuesday, Biles said she was going to take the rest of the Olympics "one day at a time" as she looks to add to her haul of four gold medals won at the 2016 Rio Olympics.

Visa, another athlete sponsor, recognizes Biles' "incredibly brave decision," said senior vice president of Global Sponsorship Strategy Andrea Fairchild. The decision "shows how Simone is able to inspire both on and off the mat."

Biles is one of the 102 Olympic athletes Visa sponsors in conjunction with its Team Visa program. "We wish her well in the days ahead," Fairchild added.

Protein shake brand Core Power tweeted Wednesday morning that Biles is "showing us all that her courage and strength extend well beyond the mat."

"We're in awe of you today and every day," the company added on Twitter along with a goat emoji – a reference to GOAT, or greatest of all time.

Core Power told CNN Business it has partnered with Biles for the last six years and that she has been one of its brand ambassadors since 2016. The company launched a new ad campaign featuring Biles on June 29.

"We've supported her physical recovery with Core Power protein shakes, and as a company we unequivocally support her full and complete health," the company said via email.

Team USA sponsor United Airlines didn't immediately respond Wednesday morning to a request for comment. The company told the sports news site Sportico that it has been proud to partner with Biles for years and continues to support her.

Uber Eats, which featured Biles in its "Tonight I'll be eating" commercials late last year, said Wednesday that it also stands by her.

"She has shown true strength both inside and outside of the gym, setting an incredible example for athletes around the world," the company said.