Whether watching bikers fly through the air from a bridge hundreds of feet away or lining up on the street to take in a triathlon, Tokyo's eager fans are increasingly finding ways to enjoy the Olympics in person — despite the ban on spectators inside venues.

Hundreds of people were seen crowded along a bridge close to the BMX freestyle venue trying to catch a glimpse of the final competitions on Sunday. Crowds lined the streets to watch cyclists competing in the mixed triathlon event on Saturday morning, and many defied requests from police to leave the area.

With Covid-19 cases surging to new records in Tokyo and Japan's capital under a state of emergency, the Olympics are effectively operating in a bubble, with residents on the outside looking in.

While public-facing events give spectators a chance to get a glimpse of the Games, the pandemic makes it risky. Tokyo's daily case numbers keep hitting new records, and doctors have warned that health care systems are facing a tremendous burden that is at risk of being overwhelmed.

The Olympic Games is not behind the recent surge in Covid-19 infections in Japan, Tokyo 2020 boss Toshiro Muto said at a news conference Sunday.

A total of 259 Covid-19 cases have been linked to the Games, according to Olympic officials.

Six people have lost their accreditation for the Tokyo 2020 Olympics for violating rules set by organizers to prevent the spread of Covid-19, Japan's top Games official said Sunday.

Those affected include two Georgian judo athletes, who left the Olympic Village to sightsee — a "serious violation," Toshiro Muto, head of the Tokyo 2020 Organizing Committee, said at a news conference Sunday. Officials did not name the athletes who lost accreditation.

The other incident involved four contract employees who were arrested for possession of drugs.

Covid-19 cases are surging in Tokyo and the city is under a state of emergency due to the pandemic. There were myriad concerns ahead of the Games that the competition could turn into a super-spreader event, but organizers have expressed confidence in the measures they put in place to keep Olympians, Olympic staff and the Japanese public safe.

“When it comes to the rules in Tokyo, they have been clearly established by the government and this is the state of emergency,” Olympic Games executive director Christophe Dubi said at the news conference.

Muto said organizers are also investigating an incident in which multiple athletes and members of delegations were drinking alcohol at a park in the Olympic Village on the night of July 31. There have been several other minor offenses, Muto said, but he would not disclose specifics. Those incidents did not result in removal of accreditations.

Of those, only one was an athlete, and that individual was the only case reported within the Olympic Village. The rest were contractors, volunteers or Games staff.

A total of 259 coronavirus cases have been linked to the Games so far, Olympic officials said. Organizers are not revealing their names or nationalities.

Swimming events have wrapped up at Tokyo 2020 with the US and Australia dominant on Sunday morning Japan time. Covid-19 cases are rising fast. And lots more gold medals are up for grabs today.

Tokyo's two worlds: Saturday saw Olympic records fall and new champions crowned in yet another exciting day of action. But outside Tokyo's stadiums, fields and race tracks, the city is struggling to combat what may be the most devastating surge of Covid-19 the Japanese capital has seen to date.

The Tokyo Metropolitan government said Saturday they had identified another 4,058 coronavirus cases, a new single-day record and more than three times the 1,128 infections reported the prior Saturday.

The so-called Olympic "bubble" appears to have held, with no major outbreaks so far. But there's still a week left until the closing ceremony, and the pandemic shows no signs of abating.

Swimming ends: Swimming wrapped up at Tokyo 2020 on Sunday with five medal events, all of which were won by either the United States or Australia. American Caeleb Dressel added two more gold medals to his haul — he'll leave Tokyo with five golds in total.

Australia's Emma McKeon took home two golds on Sunday, too. She won seven medals these Games, including three golds. According to NBC, she is just the second woman to win seven medals at a single Olympics, a feat only previously accomplished by Soviet gymnast Maria Gorokhovskaya.

Medal count update: China leads all countries with 22 gold medals, followed by the US with 19 and Japan on 17. The Americans lead the overall medal tally with 52.

Olympic swimming wrapped Sunday with five thrilling races, all of which were dominated by either the United States or Australia. Here's how it went down:

Dressel dominates from start: American Caeleb Dressel set the tone early for Team USA, winning the men's 50 meter freestyle race to net his fourth gold medal of Tokyo 2020 — and it wouldn't be his last. France's Florent Manaudou, who won the event in Rio in 2016, came second.

McKeon adds to her haul: Next up was the women's 50 meter freestyle, which Australian star Emma McKeon won by setting an Olympic record. She had previously won the 100 meter freestyle and, by this point, had earned six medals in Tokyo. She'd win one more by the end of the morning.

Another Aussie record: Australia set an Olympic record to win the women's 4x100 meter medley relay — and give McKeon her second gold medal of the day. She ended Tokyo 2020 with seven medals overall, including three golds.

Before her, Soviet gymnast Maria Gorokhovskaya was the only woman to have previously won seven medals at a single Olympics, according to NBC.

Closing with history: The Americans closed out Tokyo 2020's swimming competitions by winning gold and setting a world record in the men's 4x100 meter medley relay. Caeleb Dressel swam butterfly in the race and, with the win, will leave the Japanese capital with five gold medals.

Biles, arguably the world's greatest gymnast, has pulled back from Olympic competition in Tokyo to focus on her mental health. The 24-year-old explained in a series of Instagram posts that she has the "twisties," a mental block in gymnastics in which competitors lose track of their positioning midair.

USA Gymnastics said yesterday that Biles would be withdrawing from two other individual disciplines, vault and uneven bars.

She will make a decision about the final event, beam, "later this week."

The women's vault and bars finals are scheduled for Sunday, the women's floor final is Monday, and the beam final is Tuesday.

People swarmed Olympic monuments in Tokyo to snap selfies on Saturday, despite the surging number of Covid-19 cases in the Japanese capital.

Tokyo remains under a state of emergency due to the pandemic, and the metropolitan government reported on Saturday that they had identified a new single-day record of more than 4,000 cases.

But that spike in infections has not dampened the mood for many Olympic fans around the new National Stadium, especially among eager fans lining up by the Olympic Rings monument to take pictures.

“I’ve been watching the Olympic competitions on TV from home because the events in Tokyo can’t have spectators. But I wanted to get a feel for the Olympic spirit, so came here (to the Olympic Rings),” one Tokyo resident told CNN. “My friends were also posting photos on Instagram of themselves by the Olympic rings, so I wanted to take some too.”

Going into the Games, polls showed the Japanese public largely opposed holding the Olympics in the middle of the pandemic. But some Tokyo residents told CNN Japan’s recent gold rush at the Games had shifted their opinions around the Olympics.

“At first, I wondered how Japan would pull off the Olympics, but once they started, Japan started winning lots of gold medals,” another resident said. “It made me feel like Japan was going head-to-head with other nations and doing well. It made me want to cheer on my country.”

Olympians taking part in Tokyo 2020 are competing for a chance to write a page in the history books — and hopefully bring home a medal.

If you do win a medal — be it gold, silver or bronze — they're pretty much priceless.

Former British heptathlete Kelly Sotherton, who won a bronze in heptathlon at Athens 2004 and another for the 4 x 400-meter relay at Beijing 2008, told CNN Sport that her medals are a reminder of how her hard work and effort paid off.

"I would never sell my medals," Sotherton told CNN Sport on Friday. "They mean a lot."

Sotherton said she keeps her medals accessible rather than putting them up in a frame.

"I think it's nice to sometimes put them on," she added.

The design of the medals changes for each games, and this time around they are the work of Junichi Kawanishi.

Each of the gold, silver and bronze medals are 85 millimeters in diameter and range in thickness from 7.7 mm to 12.1 mm.

The gold medal is in fact made from gold-plated pure silver, with around 6 grams of gold out of a total weight of 556 grams.

The silver medal is made from pure silver and weighs around 550 grams, while the bronze medal weighs approximately 450 grams and is in fact made from 95% copper and 5% zinc.

Earlier this month a winner's medal from the 1896 Athens Olympics sold for $180,000 at auction, Cuban shooter Leuris Pupo's gold medal from the London 2012 Olympics fetched $73,200, and his compatriot Iván Pedroso's long jump gold medal from Sydney 2000 went for $71,335. All three were sold by Boston-based RR Auction. 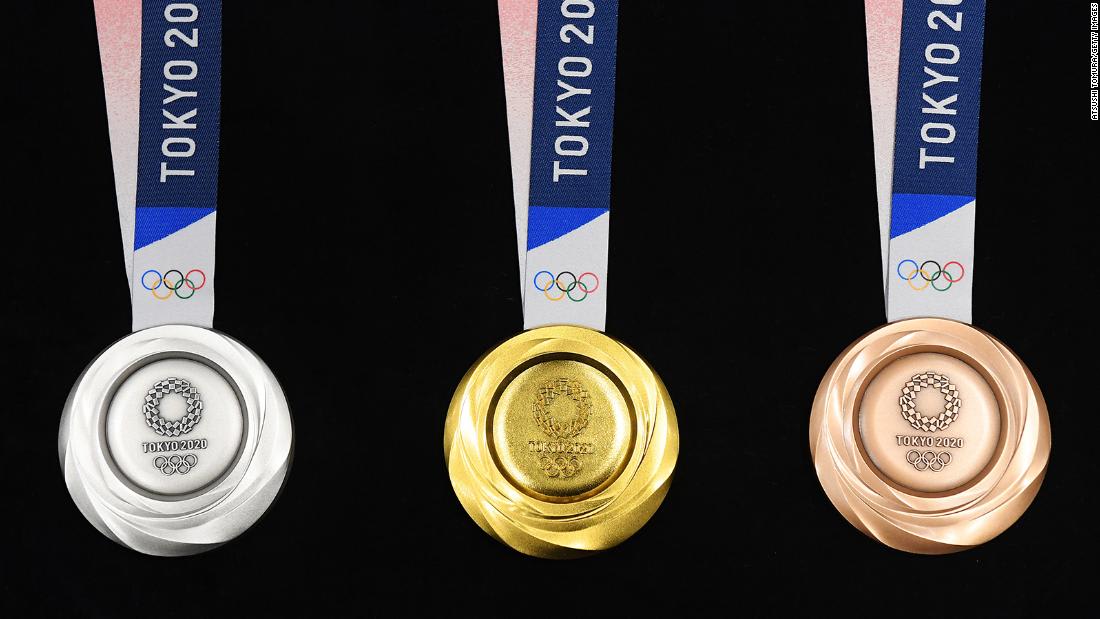 How much are Olympic medals worth?