Winning an Olympic medal can come with serious perks. Here are some of the best freebies given to stars of Tokyo 2020:

Hidilyn Diaz, Philippines: The 30-year-old weightlifter won the Philippines' first-ever gold medal — and she'll be getting a new condominium and free flights for life on AirAsia Philippines and Philippine Airlines.

Mirabai Chanu, India: The 26-year-old weightlifter won her country's first medal of the Tokyo Olympics by taking silver in women’s 49kg weightlifting. Dominos India offered to treat her to free pizza for life.

Irie defeated the Philippines’ Nesthy Petecio by a unanimous 5-0 decision.

Japan has now won 18 gold medals at Tokyo 2020, its most ever in a Summer Games.

Norwegian runner Karsten Warholm said he had a "special feeling" on Monday. The kind he'd felt as a 6-year-old, but an excitement that had eluded him until the day before the biggest race of his life.

"I’ve spent thousands of hours thinking about this," he said, adding that he'd been training like "a maniac."

Warholm already held the world record in the men's 400 meters hurdles before the Olympic final Tuesday. Then he smashed his previous best, becoming the first person ever to run the event in under 46 seconds.

"It’s by far the biggest moment of my life," he said. "It defines everything, all the hours I put in, everything that my coach has been working for."

The race was one of the Games' most exciting events to date. World Athletics called it the "the highest quality 400 meter hurdles race in history." Second-place finisher Rai Benjamin also managed to beat Warholm's previous world record, but had to settle for silver.

Warholm said he didn't touch a single hurdle and, coming to the race's final stretch, he "found another gear."

"The Olympic gold medal is what everybody talks about. I knew this race was going to be the toughest of my life, but I was ready," he said. "It’s just so big. It’s almost like history here."

Tough loss for Benjamin: The silver medalist was in tears on the track after posting the second-fastest time in the event in history, only to come in second.

Benjamin said he was "full of emotion."

"Knowing that you want to be the best, this is what it costs. It’s hard. It hurts. But it is what it is," he said. "I have worked so hard. This is what matters. I got a medal but it just hurts to lose."

Benjamin said he plans to spend some time with his family but then come roaring back.

The International Olympic Committee (IOC) said it will launch a formal investigation into the situation with Belarus sprinter Kristina Timanovskaya, spokesman Mark Adams said in a news briefing Tuesday.

"We have decided to launch, not surprisingly, a formal investigation which will be led by the IOC Administration. We need to establish the full facts, we need to hear everyone involved, that obviously can take time," Adams said.

Adams reiterated the IOC has spoken to Timanovskaya again and she "reassured us once again she's feeling safe and secure." He said the IOC has requested a report from Belarus' National Olympic Committee.

Timanovskaya received a humanitarian visa from Poland on Monday, hours after she refused to board a flight out of Japan. She said she was being forced to return to Belarus against her will and that she feared she would be arrested upon returning.

Earlier Monday, Reuters reported that Timanovskaya had been seen entering the Polish embassy in Tokyo.

The entire Tokyo prefecture is under a heat illness alert on Tuesday, with the maximum temperature forecast to reach up to 35 degrees Celsius (95 degrees Fahrenheit) on each of the next three days.

But the heat index values will be even higher, and the temperatures will feel as high as 40 degrees Celsius (104 degrees Fahrenheit) or more.

Because of these conditions, Japan's Meteorological Agency may issue a code red heat alert, the highest level on the scale. Heat stroke alerts have been issued as a result through this forecast period for the prefecture as well.

The stifling heat and humidity has made it difficult for athletes competing outdoors in events like tennis and distance running.

Biles is back: Simone Biles is expected to compete in the final women's gymnastics event of Tokyo 2020: the balance beam. The American superstar withdrew midway through the women's team final last week, and has not competed since, citing mental health concerns.

Biles is a favorite to win the event. She'll be competing alongside fellow American Sunisa Lee, who won the women's individual all-around title last week.

Warholm makes history: Norway's Karsten Warholm became the first athlete ever to run the 400 meters men's hurdles in under 46 seconds on Tuesday morning.

Hassan's big night: Sifan Hassan is a third of the way toward her goal of a historic distance triple crown. The Dutchwoman obliterated the rest of the field to win gold in the women's 5,000 meter final to complete the first leg of what could be an unparalleled treble.

Hassan is aiming to become the first athlete in Olympic history to win the 1,500 meters, 5,000 meters and 10,000 meters gold medals at a single Games.

She had a dramatic Monday morning in her 1,500 meter heat. Hassan fell on the last lap and had to make up more than 20 meters on the field, but somehow ended up winning the race.

Timanovskaya likely headed to Poland: Belarusian sprinter Kristina Timanovskaya received a humanitarian visa from Poland on Monday, hours after she refused to board a flight out of Japan. She said she was being forced to return to her native country against her will and feared being arrested upon her arrival.

Timanovskaya was set to compete in the women's 200 meters in Tokyo but said representatives of the Belarus national team tried to forcibly send her back to her home country after she criticized national sporting authorities for entering her into the 4x400 meter relay without her consent.

The medal update: China is pulling ahead. It has won 29 gold medals, seven more than the second-place US. Japan remains in third with 17.

The US leads the total medal tally with 66, followed by China with 63. The Russian Olympic Committee sits third with 50.

History was made on the track Tuesday morning in the men's 400 meters hurdles final.

Norway's Karsten Warholm took gold, setting a world record of 45.94 and breaking the 46-second mark for the first time.

American silver medalist Rai Benjamin pushed Warholm all the way, clocking in at 46.17 — easily inside the previous world record of 46.70, set by the Norwegian on July 1. Before that, the 400 meters hurdles world record hadn't been broken since 1992.

According to NBC, three of the four fastest times ever in the event were run in the Tokyo final.

Naomi Osaka discovered what it's like to be at the sharp end of a sporting governing body's regulations this summer.

The ​four-time grand slam singles champion declined to ​attend press conferences as she began her French Open campaign in June — citing the importance of protecting her mental health and addressing the toll that media interviews had previously taken on her.

The French Open organizers responded by fining the world No. 2 an amount of $15,000 and threatening to expel her from future grand slams, after they deemed her withdrawal from press conferences as a failure on her part to meet "contractual media obligations."

Osaka made the decision to withdraw from Roland Garros altogether, then skipped Wimbledon, before returning to play at the Tokyo Olympics.

What's happened to Osaka over the last few months has left many ​critical of her sport's handling of the situation, and wishing those who govern her sport ​had adopted a more empathetic and sensitive approach given ​she was dealing with mental health issues.

In fact, just after Osaka said she would be opting out of speaking to the press at the tournament, the French Open official Twitter account posted a since-deleted tweet that included photos of four other players engaging in media duties — Coco Gauff, Kei Nishikori, Aryna Sablenka and Rafael Nadal — which carried the caption: "They understood the assignment."

The tweet appeared to be directed at Osaka and her decision to withdraw from media obligations. It was considered by several former tennis players and pundits as insensitive, and former doubles champion Rennae Stubbs said that the post could make Osaka "feel guilty" and described it as "humiliating" for her.

And while the rule itself — in which players are required to engage in press conferences throughout the tournament — ​may not be a racist or misogynistic one, the context in which Osaka found herself ​punished and seemingly mocked by officials is part of a pattern in which Black women in ​elite sports are subject to harsh scrutiny. 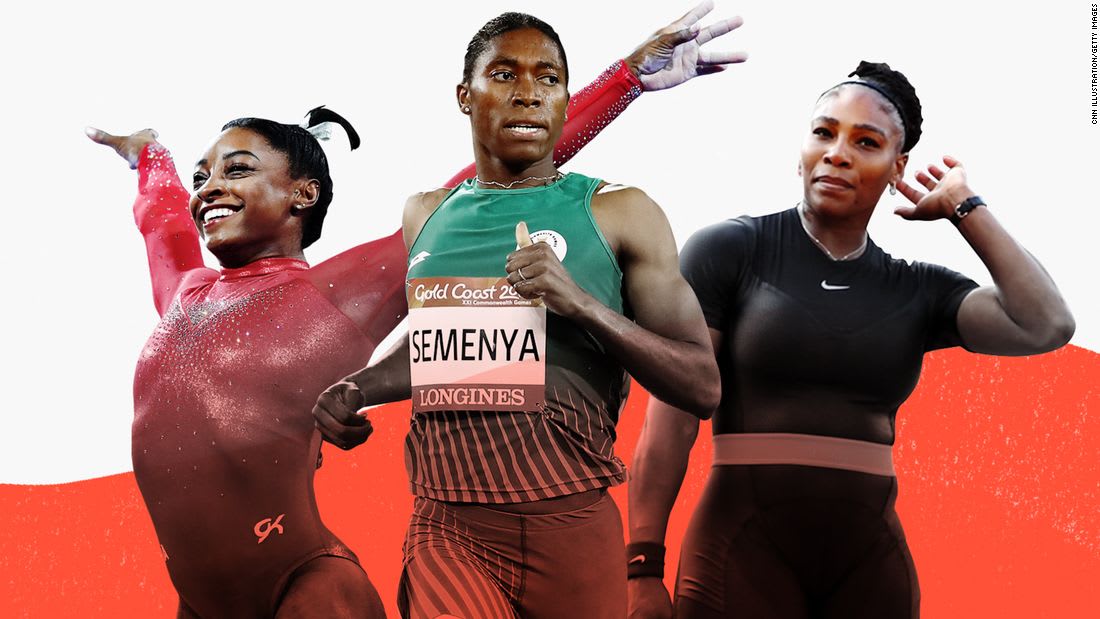 Biles — considered one of the greatest gymnasts of all time — participated in the Olympic gymnastic qualifications on July 25 and then in the US' vault rotation in the women's team final on July 27 before withdrawing from competitive action, citing mental health concerns.

A tweet from USA Gymnastics on Monday read: "We are so excited to confirm that you will see two U.S. athletes in the balance beam final tomorrow — Suni Lee AND Simone Biles!! Can't wait to watch you both!"

The 24-year-old Biles, who won a silver medal as part of the US team's second place finish in the team final, then withdrew from four individual finals at the Tokyo Games — the all-around individual competition, the vault, the uneven bars and floor.

Biles won four golds in the 2016 Rio Olympics and Tuesday's balance beam will be her last opportunity to compete at the Tokyo 2020 Games.