British skateboarder Sky Brown, another one of the sport's bright young stars, won bronze. She beat out Misugu Okamoto for third place, denying Japan a clean sweep in the event.

With Yosozumi's win, Japan has taken gold in all three skateboarding events so far in Tokyo.

Skateboarding is back. Women's sport climbing makes its Olympic debut. And the women's 400 meters hurdles final proved to be just as exciting as the men's race on Tuesday.

Here's what you need to know on day 12 of the Tokyo Olympics.

Timanovskaya leaves Tokyo: Belarusian Olympic sprinter Kristina Timanovskaya was seen boarding a Vienna-bound flight out of Tokyo on Wednesday, just days after she was threatened by team officials for refusing to compete in an event she had never trained for.

She then skipped the next four individual finals — the all-around individual competition, the vault, the uneven bars and floor — to focus on her psychological well-being.

Biles said competing in beam was different than the other disciplines.

"For the other events, physically and mentally, it was not safe for me to do it because I could not do the skills without jeopardizing my health and safety," she told reporters after winning bronze.
"At the end of the day, we're not just entertainment. We're human and there are things going on behind the scenes that we're also trying to deal with on top of sports."

The leaderboard: China leads all countries with 32 gold medals, followed by the US with 25 and Japan with 19. The US has won 75 total medals, more than any other nation. China is second with 69 and the Russian Olympic Committee has 52.

For the second day in a row, an Olympic 400 meters hurdles final was a tightly contested race — with two athletes breaking what was the previous world record in the event and the third-place finisher running the fourth-fastest time ever.

This time it came in the women’s race.

Americans Sydney McLaughlin and Dalilah Muhammad entered the final as favorites to win gold. McLaughlin had set the previous world record in June with a time of 51.90 seconds. On Wednesday morning in Tokyo's Olympic Stadium, she and Muhammed both topped it.

McLaughlin finished nearly a half-second faster, taking gold with a run of 51.46 seconds. Muhammad, who won this event at Rio 2016, took silver in a time of 51.58.

"What a great race," McLaughlin said. "I'm just grateful to be out here celebrating that extraordinary race and representing my country."

Femke Bol of the Netherlands finished in 52.03 seconds to win bronze. Bol's time was the fourth-fastest run in this event ever.

"I can't really (get) it straight in my head yet. I'm sure I'll process it and celebrate later," McLaughlin said after the women's race.

Bronze medalist Alison dos Santos of Brazil ran the fourth-fastest time in history in the men's event to win bronze — just like Bol.

Belarusian Olympic sprinter Kristina Timanovskaya, who refused to fly home fearing she would be arrested, was seen boarding a Vienna-bound flight out of Tokyo on Wednesday.

The 24-year-old athlete was set to compete in the women's 200 meters at the Tokyo Games on Monday, but instead said team officials tried to forcibly send her back to Belarus against her wishes after she criticized sporting authorities.

Her drama-filled plight has dominated global headlines around the Games and while her comments were not overtly political, her case has heightened fears of the safety of those who speak out against Belarusian officials.

The athlete had been expected to travel to Warsaw, Poland, where she was offered safe refuge and a humanitarian visa by the country's Prime Minister. It is not clear if she will make a connection in Vienna on her way to Poland, or if she intends to stay in Austria, or travel elsewhere. 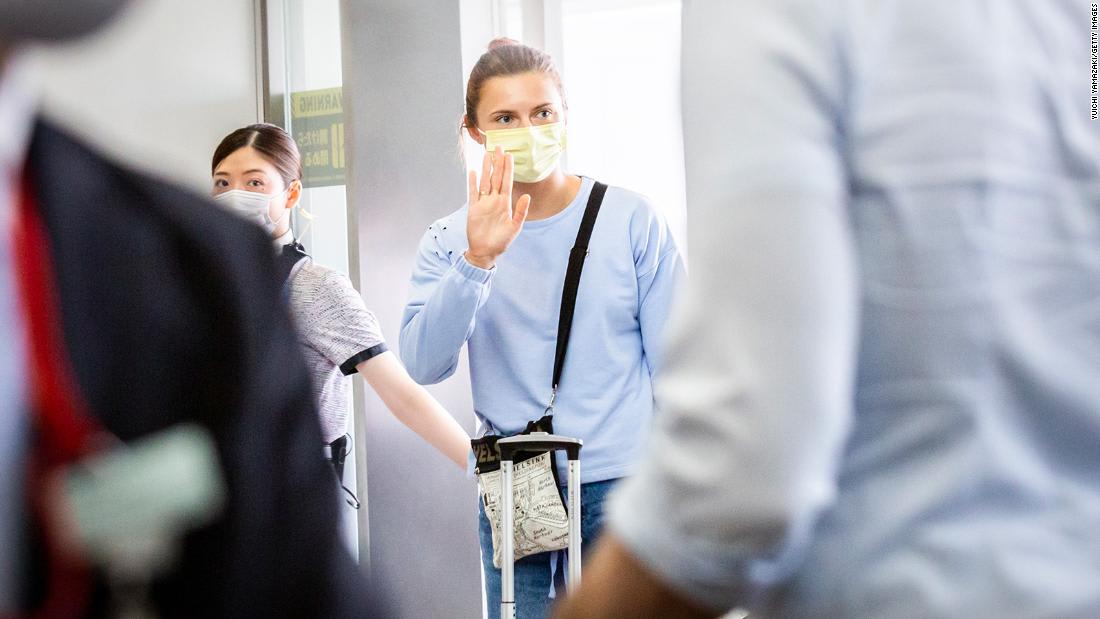 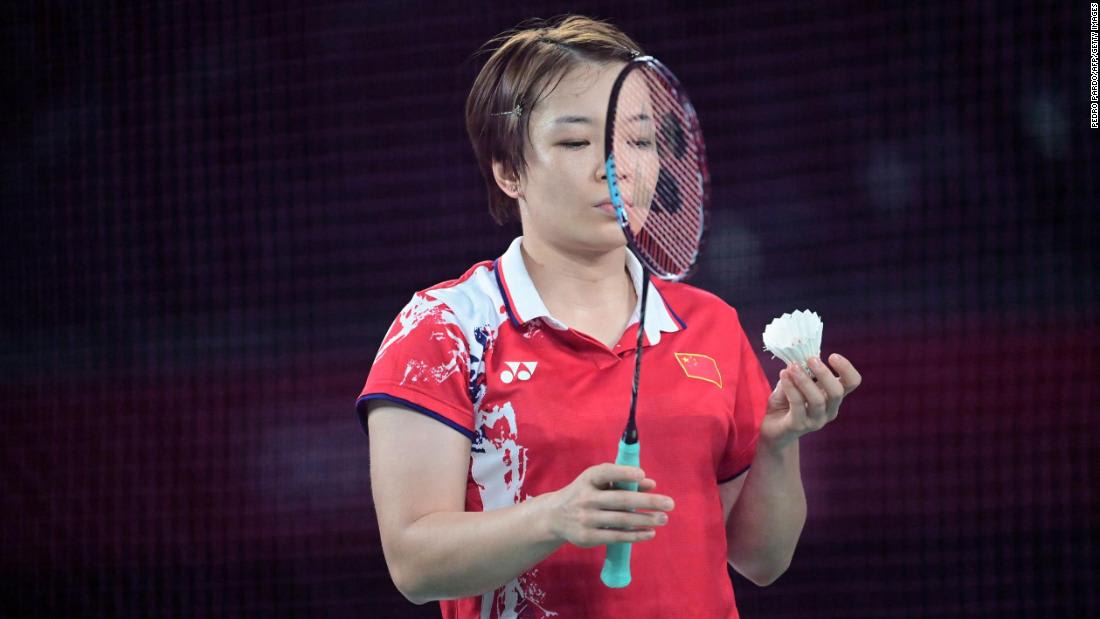 US hammer thrower Gwen Berry says she is "ready to change some stuff for real" after raising her fist before the women's hammer throw final at Tokyo 2020 on Tuesday.

As she was introduced into the stadium, Berry raised a clenched fist, later explaining she was protesting social and racial injustice.

Berry has been outspoken on social issues in the past and has a history of protesting at major track and field events.

After qualifying for her second Games in June, the 32-year-old turned away from the flag while the national anthem played during the medal ceremony and draped a T-shirt reading the words "activist athlete" over her head.

Berry later said she was "set up" on the podium having been told that the anthem would be played before the athletes stepped on.

In 2019, she also lost some of her sponsorships after raising her fist in protest on the podium at the Pan American Games in Peru.

She received a 12-month probation from the US Olympic and Paralympic Committee for the act, which she says was meant to highlight social injustice in America.

Following a 10-month review of the rule that concluded in April, the body decided to uphold it, but in July added an amendment allowing athletes to express their views in mixed zones, press conferences and during interviews, as well as prior to the start of competition. 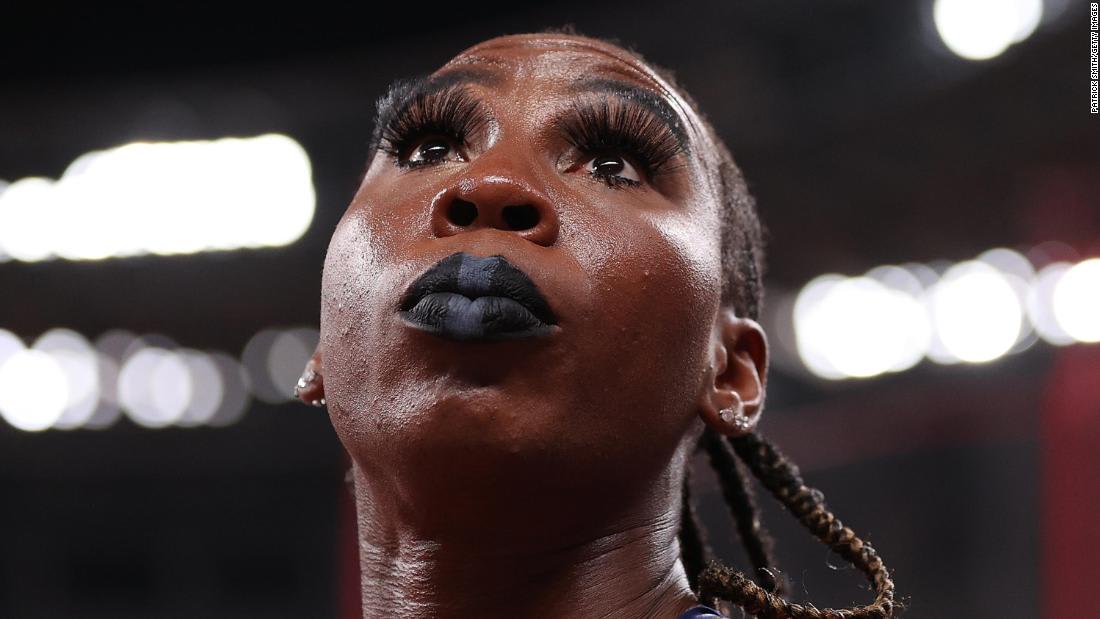 'I'm just here to represent,' says US athlete Gwen Berry after raising her fist at Tokyo 2020

The Tokyo Olympics will soon be coming to a close. But in the meantime, there are still several medals to be handed out in key events.

Here's a shortlist of the finals happening on Wednesday:

Biles' psychological well-being has been the focus of attention since she withdrew from the women's team final last week.

The 24-year-old then didn't compete in four individual finals at the Tokyo Olympics — the all-around individual competition, the vault, the uneven bars and floor — but returned to great applause from her US teammates seated in one corner of the Ariake Gymnastics Centre.

"To bring the topic of mental health, I think it should be talked about a lot more, especially with athletes because I know some of us are going through the same things and we're always told to push through it," Biles told reporters following her third-place finish.
"We're all a little bit older now and we can speak for ourselves. But at the end of the day, we're not just entertainment. We're human and there are things going on behind the scenes that we're also trying to deal with on top of sports."

Following her withdrawal from the team event, Biles said that she was medically evaluated each day and also had two sessions with a Team USA psychologist.

The dismount of her beam routine was also switched at the last minute so she wouldn't have to perform a twist.

"Going forward, it was just taking it a day at a time and seeing where that went," Biles said about the days since her withdrawal from the team final.
"For the other events, physically and mentally, it was not safe for me to do it because I could not do the skills without jeopardizing my health and safety."

Tuesday's beam final was Biles' last chance to claim a medal at Tokyo 2020 and she scored 14.000 for a clean and confident routine.

That score initially placed her second behind China's Tang Xijing on 14.233, but the 16-year-old Guan, the top qualifier in the event and the last to perform her routine, moved into the gold medal position with a score of 14.633. 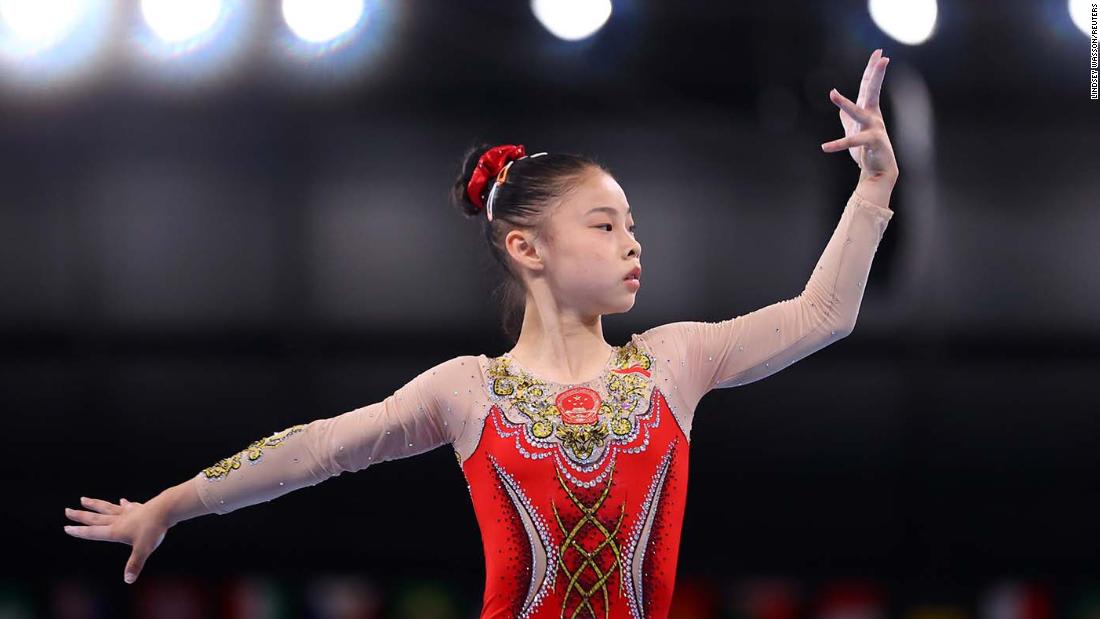