We're heading into the final weekend of competition at the Olympics. As the Games draw to a close, here's what you need to know from Tokyo.

A "new phase" of the pandemic: Though the Olympics have, by and large, gone about as well as could be hoped for a major sporting competition held in the middle of a pandemic, the situation off the pitch and outside Tokyo 2020's many venues appears dire.

"In many areas the new positive cases are increasing at an extremely rapid pace which we have never experienced before," said Yasutoshi Nishimura, the government minister responsible for Japan’s coronavirus response.

Nishimura said the more infectious Delta variant accounts for about 90% of all cases in the Tokyo metropolitan area.

Olympic organizers and Japan's leaders, including Tokyo Gov. Yuriko Koike and Prime Minister Yoshihide Suga, have previously said they do not believe the Olympics have contributed to the surge in cases.

But some medical professionals and public health experts disagree. They see people gathering outside venues like Tokyo's Olympic Stadium and worry that a corresponding, post-Games spike in Covid-19 cases is coming — a potential catastrophe considering just how overburdened the country's medical infrastructure is.

"What we are seeing on the ground is that there is already a collapse of the medical system, and this wave has just begun, and the number of infections is expected to increase strongly next week and the week after that," said Dr. Hideaki Oka, an infectious diseases specialist.

Karate's debut: Japan's most famous martial art made its Olympic bow on Thursday, with competition scheduled to go late into the evening. The first of nine medal bouts starts at 7:30 p.m. Tokyo time (6:30 a.m. ET).

Karate's inclusion in the Olympics is set to be short-lived, as the event was excluded from the Paris 2024 Games' program.

NBA stars face-off: Today's basketball games determine who plays for gold on Saturday in Japan. Kevin Durant, Damian Lillard and the rest of Team USA's star-studded roster take on Australia. The Boomers, led by NBA veterans Patty Mills and Joe Ingles, surprised the basketball world by beating the Americans in exhibition play last month. That game is followed by France vs. Slovenia, which will see the NBA's three-time defensive player of the year, Rudy Gobert, take on Luka Doncic, one of basketball's brightest young stars.

Medal update: China leads the way with 32 gold medals, followed by the United States with 27 and Japan with 21. Team USA has 83 total medals to top the combined leaderboard. China is second with 71 and the Russian Olympic Committee is third with 53.

What else is coming later in Japan:

Simone Biles has tweeted thanks to a Japanese gym for allowing her to privately train while she attempted to regain her gold medal form after withdrawing during the women's artistic gymnastics team final at the Summer Olympics.

While thanking those at the Juntendo University in a Wednesday tweet, Biles retweeted a story first published in The Wall Street Journal. The report says Biles and her team asked the facility if she could discretely use the gym in an attempt to overcome her struggle with "the twisties," a mental block in gymnastics where competitors lose track of their positioning midair.

The Wall Street Journal reported that university professor Kazuhiro Aoki got a phone call about 12 hours after Biles removed herself from the team final, asking to use the school's gym for a "gymnast."

According to the report, during a four-day period, Biles practiced for hours behind locked doors working on moves she previously performed with precision.

Last week, Biles posted a series of videos on her Instagram account showing the 4-time Olympic gold medal winner struggling to find her form and crashing into landing pads while practicing dismounts on the uneven bars.

Biles said Wednesday she would "forever be thankful" to Juntendo "for allowing me to come train separately to try to get my skills back." 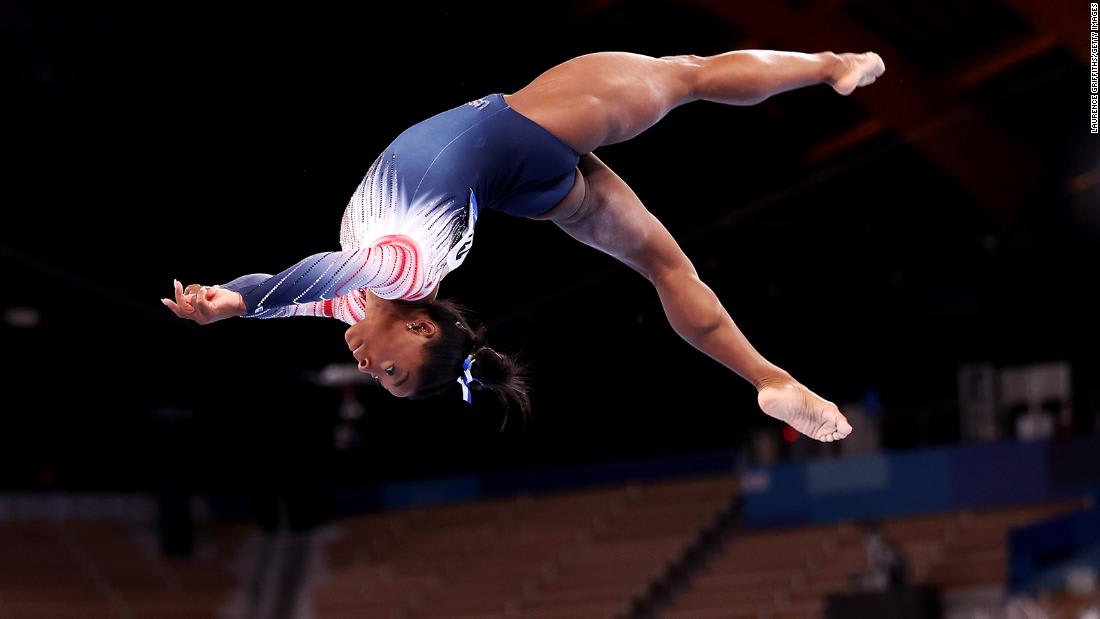 Another day of the Tokyo 2020 Olympics is in the books. If you're just reading in now, here are some of the highlights and key storylines from Wednesday's Games:

Tokyo is considered one of the world's top food cities, drawing travelers from around the world who spend their days sampling renowned Japanese dishes, from sushi to ramen.

But for those who flew into the city to compete or work at the Tokyo Olympics, most local restaurants are off limits.

While Japan is still closed to international travelers, the athletes, coaches and journalists permitted to enter the country for the Games have to follow a strict set of safety rules and are not permitted to leave the vicinity of their accommodation for a 14-day period unless approved for an exception.

Luckily, Japan's 24-hour convenience stores, many of which are attached to hotels, are arguably the best in the world and offer an unbelievable array of foods and drinks.

Ask anyone who has traveled to Japan and they will likely have a story about a memorable visit to a konbini — the abbreviated name for convenience stores in Japanese.

Thanks to a series of social media posts from journalists and athletes, they've been pushed into the limelight at the Tokyo Olympic Games not just for their fine offerings but for their top-notch customer service as well.

Case in point: 7-Eleven came to the rescue after a sports reporter for Canada's CBC network in Tokyo called out for help on her Twitter account. The issue? She wanted to learn the correct way to unwrap a package of onigiri, a Japanese rice ball.

The post, featuring a video of Anastasia Bucsis failing to open her onigiri without tearing apart the exterior seaweed, gained 82.2k likes and was retweeted over 34.6k times since being posted on July 27.

In response, 7-Eleven Japan posted a how-to video explaining the correct way to open the cleverly designed packages on its Twitter account.

"Today, we would like to introduce how to open a package film of rice ball for the customers who are visiting Japan from overseas," the post said. 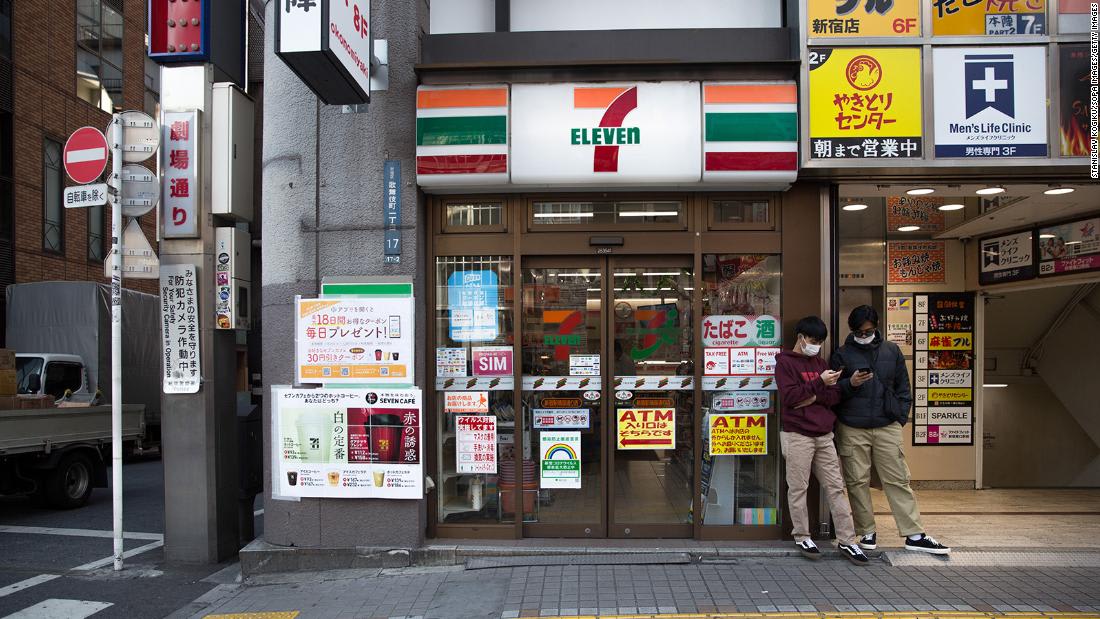 With three gold medals from three events, Tokyo's Ariake Urban Sports Park has been a home from home for Japanese skateboarders at the Tokyo Olympics.

Sakura Yosozumi was the latest to top the podium as park skating's first ever Olympic champion, while her teammate, Kokona Hiraki, made history of her own as the youngest medalist since 1936 at the age of 12 years and 343 days.

Of the nine skateboarding medals handed out in Tokyo — the first time the sport has featured in the Olympic program — Japan has won five of them.

"After the decision was made for skateboarding to be included in Tokyo 2020, I think all the skaters strived to learn good tricks," was Yosozumi's explanation for her country's dominance.

Another theme to emerge from skateboarding's Olympic debut is success for some of the Games' youngest ever competitors.

Great Britain's Sky Brown, 13, claimed the bronze medal in Wednesday's park skating competition with her last run of the day. It meant the three skaters on the podium had a combined aged of 44 — two years more than the medalists in last week's women's street final.

With an English father and a Japanese mother, Brown says she also "really feels at home" in Tokyo, though she discredited the idea that youth is a prerequisite for skateboarding success.

"Anyone can do skateboarding," she told reporters. "You don't have to be of a certain height or a certain age — you can do it whenever you want ... You just got to skate and go for it."

Olympic spirit: Brown said her last-ditch attempt to get into the podium positions with the penultimate run of the final was spurred by an encouraging word from Yosozumi that helped the Briton land the kickflip indy she had missed on the previous two runs.

"She told me: 'You got it, Sky. We know you're gonna make it.' That really made me feel better," said Brown, who counts Yosozumi as one of her closest friends. 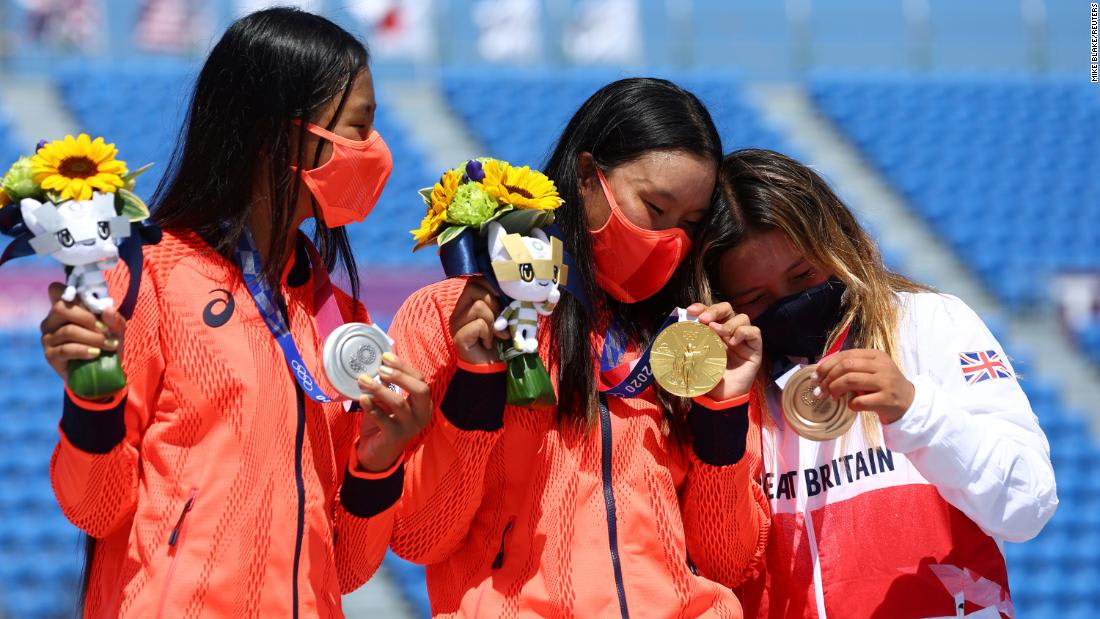